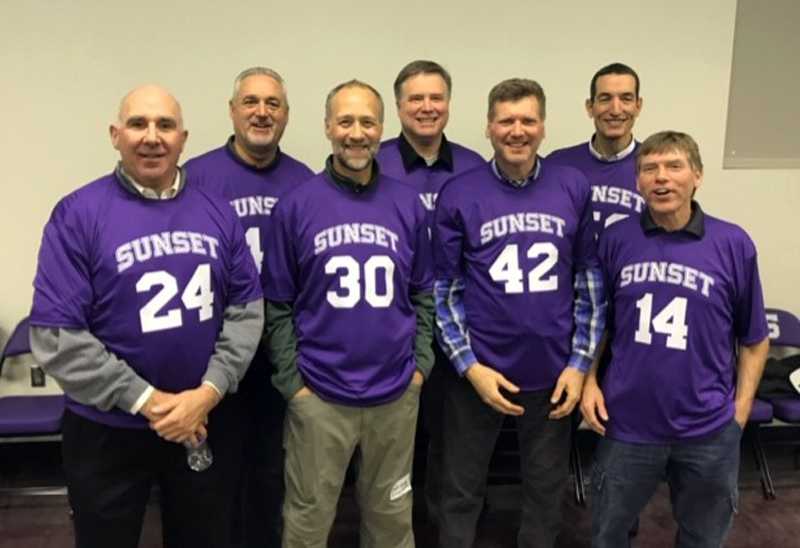 Kevin Bryant, left, and the rest of the "Wyttenberg Boys"

[Editor’s note: The article below was written by Kevin Bryant, who most recently was District Athletic Director in Redmond. He now serves as President of Thrive Athletic Consulting, LLC]

In November of 2018, my high school basketball coach, John Wyttenberg, of Sunset High School fame, died. He was 91 years old. It was a sad time for the many Apollo players who had been impacted by his life, coaching, and teaching. He was a master of creativity, preparation, details, and coaching success. I was fortunate to have been a part of the 1975 OSAA AAA boys’ basketball state championship team he coached.

In the days leading up to and following our celebration of Coach Wyttenberg’s life many of the “Wyttenberg Boys” (now old men), who were impacted by his many skills, gathered to share our memories, and celebrate his accomplishments. It was here that the Jesse Owens’ quote above became a reality to us all: “Friendships are born on the field of athletic strife and the real gold of competition. Awards become corroded, friends gather no dust."

We were proud Apollos and we were accomplished team members. Not much discussion took place over those many days, however, regarding our now “corroded awards.” Instead, the real gold of competition, friendships born on the field of athletic strife, came to the forefront and were celebrated.

*Summer league basketball games at Benson High School and the smell of fresh baked bread from the Franz bread factory next door on a hot summer night.

*A return trip the next winter to play against the famous Danny Ainge-led North Eugene Highlanders and coach Barney Holland.

*Playing in Memorial Coliseum near to the height of Portland Trailblazer success.

When it was all said and done, we remembered the many fun and goofy moments only high school teammates can recall and rehash. Friends truly gather no dust. We have been in better touch with one another these past few years and continue to celebrate this real gold of competition.

My love of high school basketball led me to play in college and beyond. More important than that, however, became my desire to serve others as a coach and athletic administrator. Coaching first at Churchill High School with Mike Nicksic and later with Pat Coons at Westview, I wanted others to understand what I was able to experience from their athletic investment. My love of high school athletics, coaches and athletes led me to a long career in interscholastic athletic administration (Aloha, Tigard, Redmond SD).

I am grateful to have experienced the true gold of competition; namely, friendships. The reality of this gold for me has come from teammates, coaches, athletic trainers, parents, fellow athletic administrators, and student athletes. I remain grateful that my life’s work was really started by my high school basketball coach, John Wyttenberg, and my Apollo teammates.