They did what?!!! Oregon's astounding prep sports records
Tweet
Lowell’s Cardwells have a hold on Oregon wrestling history
September 7, 2020 by John Tawa, OSAAtoday 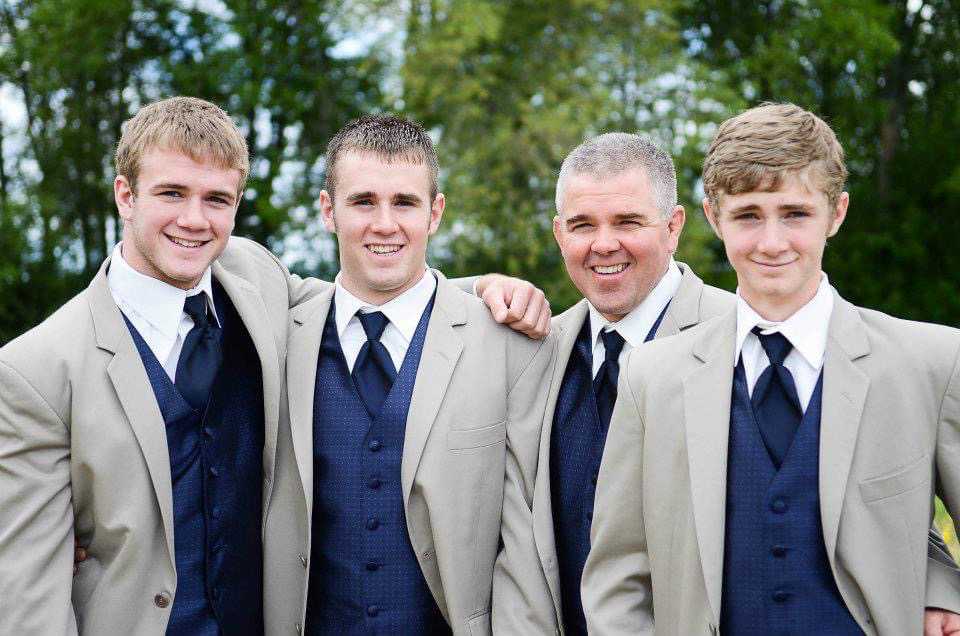 The Cardwells, Zac (left), Caleb, Jeff and Josh, were all well-suited to wrestle at Lowell

Jeff Cardwell’s father wanted his boys to be basketball players like he was. But when Jeff’s older brother, Scott, a fifth grader at the time, brought home a wrestling flyer, it not only changed what Cardwells would be doing in wintertime; it changed the course of Oregon history. Jeff and his brother each went on to win four consecutive wrestling state titles. With Jeff coaching them, his three sons added nine more. His sister’s husband and their sons piled eight state titles on top of that! Twenty-five (25) state titles, all at Lowell High School, for Oregon’s first family of wrestling…

Jeff Cardwell was a second grader when he and Scott, who was two and one-half years his senior, went to that first wrestling clinic.

“I thought this was the greatest thing ever,” Jeff said. “There was running and tumbling and…lots of things country boys do naturally. I fell in love with the fun of it. It was something I felt like I was made to do.”

It turns out that both Scott and Jeff had a natural aptitude for wrestling. Neither was tall (and topped out at under 5-foot-9), making a basketball focus more challenging. Their father fully supported their wrestling aspirations. That’s all the Cardwells needed to dive in head first.

Scott Cardwell won the first of his four titles for Lowell in 1978. Jeff’s first of four came in 1981. Nationally, brothers each winning four straight has been done more than a dozen times. A father and son each winning four? That is much rarer. The Cardwells managed that feat when Jeff’s middle son, Zac, capped his run of four straight in 2011. Zac’s four titles followed the three state titles that older brother Caleb achieved for Lowell. Youngest brother Josh added two of his own. That’s 13 titles between Jeff and his sons, four more than any other Oregon family!

“My boys were a lot like me,” Jeff said. “They took to it. Zac, especially, had a feel for wrestling as a six-year-old. I remember, after watching him just a couple of times, telling my wife that he’s going to be a multiple state champion.”

Jeff Cardwell won his four wrestling titles despite being a multi-sport athlete at Lowell. All three of his sons followed the same path. They were outstanding Red Devil football players in the fall and took the field for the baseball team in the spring.

“I think it’s healthy for them to do other things,” Jeff said.

The boys kept their wrestling edge, Jeff said, by devoting their summers to the sport. Jeff being a longtime wrestling coach in the Midwest and in Oregon, they would participate in the camps their father worked before gearing up for football come August.

Will the Cardwells always be Oregon’s first family of wrestling? The Lamers of Crescent Valley could one day join them atop the pedestal. Dad Chad, a three-time NCAA Division II national champion himself, has five sons with nine Oregon state titles between them. Two, Chance and Daschle, won titles as underclassmen last February.

Josh Cardwell’s second title came as a senior in 2014, capping the family total at 13. The six years since have given Jeff, the wrestling patriarch, time to reflect.

“If I had to do it again I would appreciate going through the day to day battles with them instead of getting caught up in the winning and losing,” he said. “The whole process, from watching them develop to how they encouraged each other, was so special.”

“The big thing,” he added, “is now I look back on it and they’re good men. Good, hard-working men. That’s what I really wanted to instill in them. I think I’m even more proud of them in that aspect.”