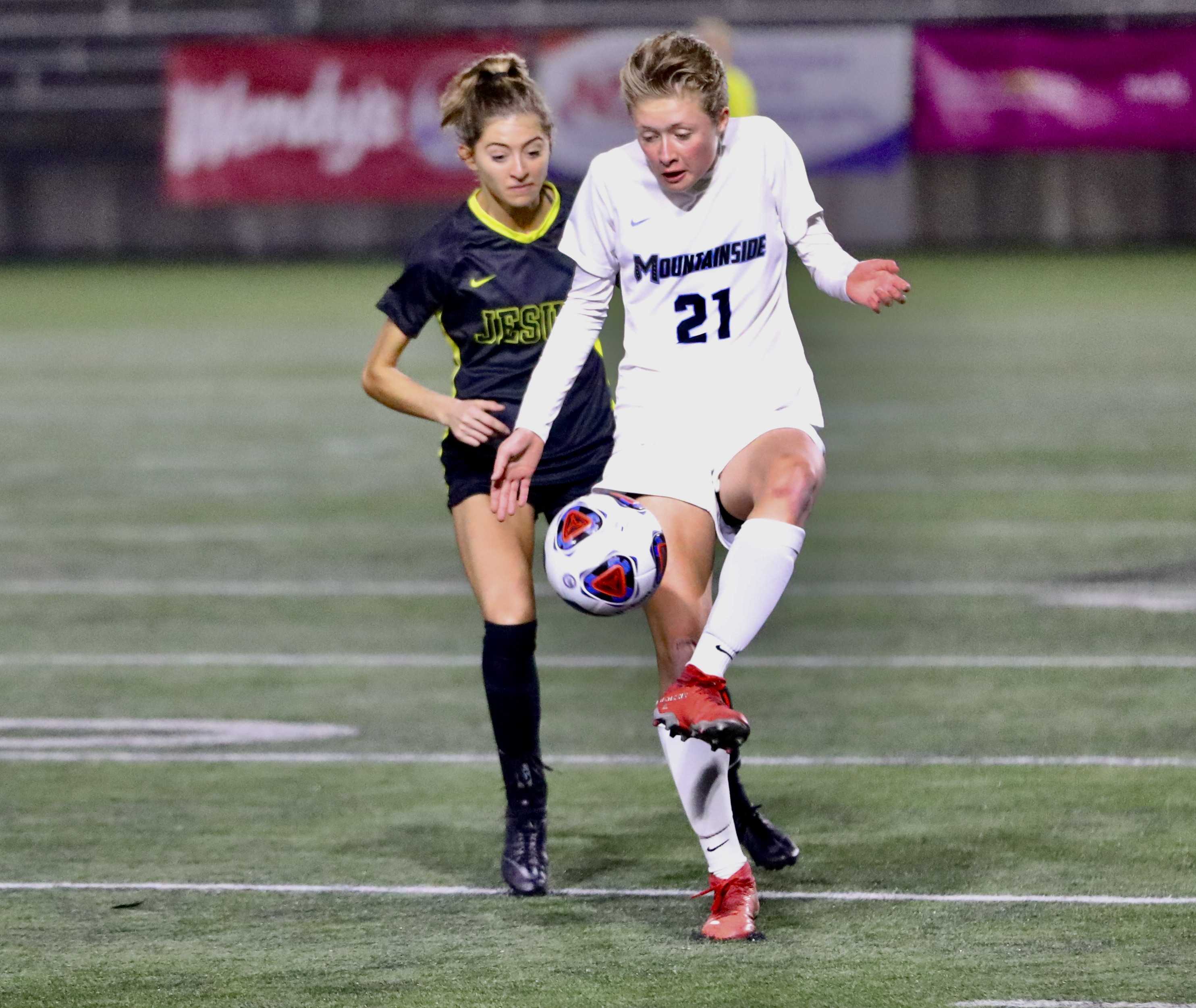 HILLSBORO — As the clock ticked away on the OSAA/On Point Credit Union 6A girls soccer championship Saturday night at Hillsboro Stadium, there was only one thing left for Jesuit senior striker Callan Harrington to do.

The ball was rolling around midway between the end line and midfield, right in front of the Jesuit student fans. Harrington hauled off, aimed into the bleachers and blasted the ball high into the stands.

As the clock went 5 … 4 … 3 … 2 … 1 … 0, Harrington was already sprinting back toward her teammates for the traditional joyful pileup.

“It was almost like a sendoff,” she said. “I wanted to kick it into the stands and run to my teammates.”

The Crusaders did it again Saturday night. They beat Metro League mate Mountainside 3-0 for their third straight state championship and carved another notch in a suffocatingly successful dynasty.

Jesuit has not lost a game since the 2016 season. The Crusaders are now 58-0-1 in the last three years. In the last two, they have outscored the opposition 237-7.

The championship game was closer than it looked. The Mavericks, still feeling the sting of a 6-1 loss to the Crusaders during the regular season, went right at the once and future champions from the beginning.

They went to gifted Nedya Sawan, their all-everything senior and returning state player of the year, as often as they could and kept the two Jesuit defenders assigned to her occupied all night long.

And the Mavericks nearly scored three times. They missed on two point-blank head balls, and in the late running Sawan smashed one that ricocheted loudly off the left upright.

So it was a healthy, reasonably close matchup that Jesuit had to work to win. It doesn’t happen often.

“There were only 22 people in Oregon who thought Mountainside could win the game,” said Jesuit coach Steve Fennah. “They were on our team.”

But if Mountainside brought the house against the Crusaders, Jesuit brought Harrington. That’s enough for anybody.

Harrington entered the game in the shadow of Oregon girls’ game’s first genuine legend. Tiffany Milbrett, who grew up just down the road from Hillsboro Stadium, was a superstar at Hillsboro, then the University of Portland, then the U.S. national team.

Milbrett scored 54 goals in her senior year at Hillsboro in 1990. Harrington came into the game with 53.

But just before halftime of a surprisingly close game, she got the record equalizer. Samantha Heinsen popped a corner kick into the far end of the box, and Harrington was right there to bash it in with her skull with 7:19 left in the first half.

The Mavericks fought on, but Harrington put the game out of range 10:14 into the second half — and put herself on top of the all-time list all by herself — on a dramatic play.

A slow-moving ball was rolling toward Mountainside goalkeeper Sidney O’Billovich, who charged out to try to clear it before Harrington could get there.

Harrington beat her to the ball by a fraction of a second and kicked a 20-yard roller under the diving keeper into the net.

Harrington was involved in the final goal, too, but on a pass. She fled down the right side of the field with the ball, and when several Mavericks formed a welcoming committee around her, she slid the ball to Taylor Krueger right in front of the goal.

“No,” Harrington said later, “I never have met Tiffany Milbrett. I don’t know anything about her, other than that she was a great player and she was on the national team.

“But I think it’s an honor for people to talk about her and I in the same breath.”

Fennah admits that he’ll miss the seniors that have dominated the state like no other school ever has.

“When you have a team with (defender) Jaiden McClellan, Callan and Mary Voltava in goal,” he said, “you have a really strong spine down the middle of the field.

“I’ll definitely miss this crew. Not only were they talented, but they worked super hard. I’ll put our work ethic up against anybody’s.”

Sawan, who got off seven shots on the Crusaders — how often has anybody done that in the last three years? — agreed that the game was a lot closer than the final score.

“The energy in this stadium was crazy,” she said. “From the moment that the game started, we settled down and played them pretty well. We did a good job on them.

“Yes, we were thinking about that 6-1 game. We didn’t think the score reflected that game at all.”

But in the end the Mavericks, too, fell before the steamroller.