Girls basketball: No. 1 Kennedy escapes No. 2 Gervais with win
Tweet
The Trojans make the key plays in the final minutes to overtake the Cougars 45-40, extend 2A Tri-River win streak to 37
January 31, 2020 by Jeremy McDonald, jmcdonaldmedia 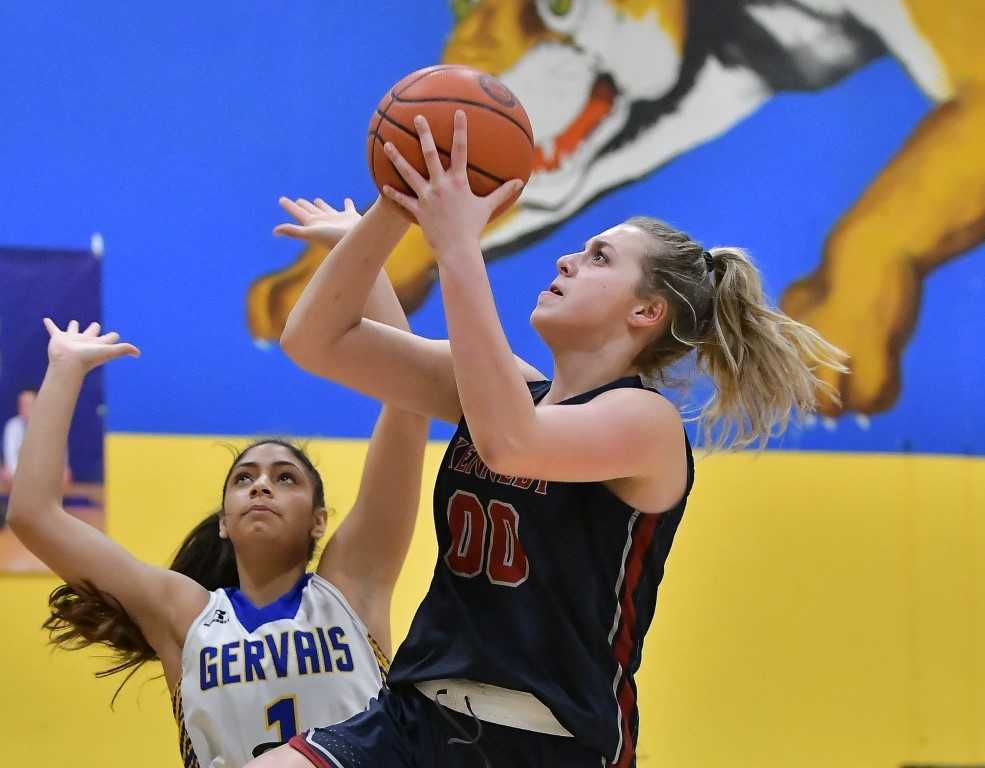 GERVAIS – No. 1 Kennedy scored the final seven points to come back for a 45-40 win at No. 2 Gervais in a 2A Tri-River Conference girls basketball showdown Friday night.

Gervais led 40-38 when freshman post Izzy Boyd made two free throws, but back-to-back baskets by junior guard Ellie Cantu and senior forward Sophia Carley put Kennedy up 42-40 with 1:28 left. The Trojans locked down on defense, and junior guard Hailey Arritola made 3 of 4 free throws to seal the win.

Gervais, which had won seven in a row, led 26-18 at half behind the hot shooting of junior guard Celi Vasquez, who made three three-pointers and scored 17 of her team-high 19 points before the break.

But four-time reigning conference champion Kennedy slowed down Vasquez in the second half and made the key plays down the stretch to extend its Tri-River winning streak to 37.

“We really focused on defense,” said Carley, who scored 21 points. “The first half was kind of rough so we came out there and gave it our all. We realized that we had to play really hard because we know they were going to play their very best against us,. They did awesome. That was a really fun game.”

Keeping Vasquez in check was key.

“The big thing is that she’s a three-point shooter so you have to have an hand in her face at all times or else she’s going to drain the threes with ease,” Arritola said. “So that was our main focus going into the second half because she was making them in the first. We had to put someone in their face.”

The Trojans went on a 12-2 run at the start of the third quarter to lead 30-28, but Gervais pulled ahead 34-32 entering the fourth quarter.

The Cougars couldn't finish off Kennedy, but they left encouraged by the performance. The teams could be headed toward another meeting in the Tri-River playoffs.