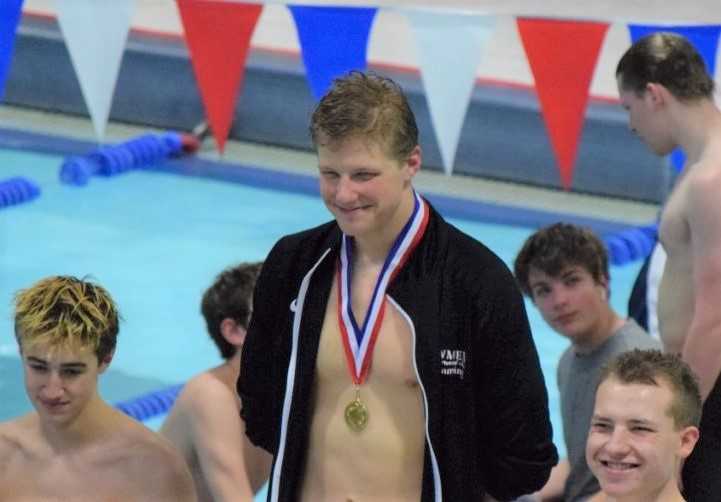 Jacob Folsom, who set five school records at Sherwood, will swim in college at Grand Canyon. (Photo by Casey Stewart)

Two years ago, swimming was little more than a hobby for Sherwood senior Jacob Folsom.

The sport ran in the family for Folsom, whose two oldest siblings – Andrew and Susan – swam in the state championships for the Bowmen. But Jacob's true passion was in musical theater.

“I wasn't really into swimming,” Folsom said. “I think I went to practice maybe once a week. I wasn't really trying. I was like, 'Music is my life. I'm going to go with that.'”

But something happened during his sophomore year that sparked a dramatic change in Folsom, who is the top qualifier in two events heading into the OSAA/OnPoint Community Credit Union 6A championships Friday and Saturday at Tualatin Hills Recreation Center in Beaverton.

Folsom tried out for the a capella group at Sherwood. When he didn't make it, he was crushed.

“What was really stunning about that was a lot of my friends said that I didn't deserve to be in it anyways,” Folsom said. “These were people I had known for years, and it was heartbreaking to me.”

Folsom said he needed a new outlet, and swimming provided it. At 6-foot-5 and with a swimmer's build, he had known he was good enough to do better in the sport, but it wasn't until he dedicated himself to workouts with the Tigard Tualatin Swim Club that he began to see results.

“I would go to eight practices a week,” Folsom said. “I would swim my heart out every day with my team. I was like, 'This is what I want to do with my life.'”

Folsom found encouragement from the club's other top swimmers, such as state champions Ben Miller of Tigard and Abby Maoz of Wilsonville.

“All these friends that I had were always pushing me past what I thought I could do,” Folsom said. “Every day they were telling me, 'You're phenomenal.'”

Folsom began to climb. As a junior, he set school records in the 200-yard individual medley and 100 freestyle, events in which he finished second and third, respectively, at the Pacific Conference district meet. In last year's state meet, though, he failed to make the finals in both events.

“To me, it was definitely a small disappointment,” Folsom said. “I was really wanting to break 48 seconds in the 100 freestyle, and that didn't happen. It was honestly a discouragement. But it honestly just made me want to train even harder. I wanted to come back and say, 'I'm going to take it next year. I'm going to go all out.'”

Folsom's attitude has been contagious at Sherwood. He has provided the Bowmen a lift not only on the scoresheet, but also on the deck as one of their biggest cheerleaders.

“He probably cares more about his teammates than himself,” Sherwood coach Kristen Maples said. “He's a joy to coach. He's super motivational with all his teammates. Everybody on the team loves him. He's all about building up his teammates.”

Folsom is a natural in the water, according to Sherwood assistant coach Quentin Rieniets.

“He's definitely very physically gifted, very athletic, and very aware of how his body is and moves,” Rieniets said. “He's definitely an athlete that everybody wants to coach, because of his natural talents and work ethic and willingness to learn.”

“I feel like this is my chance,” Folsom said. “I know I've done the training. I know I have people behind me who support me no matter what. So I feel like I can go into it and do anything.”

The meet won't be the end of the line for Folsom, however. He has signed to compete for Grand Canyon University, an NCAA Division I program in Phoenix.

“He has a high ceiling,” Rieniets said. “With the amount of technical work he has done, he still has quite a lot to kind of tweak and fine-tune to really take advantage of his size. It's going to be exciting to see what his ceiling is.”

Folsom is intent on finding out.

“I'm really excited because it just means I can go further and accomplish more,” he said. “Really it's just an opportunity to continue something that I lvoe with a team that I know is genuinely kind to each other, and know that everybody loves one another.”

A look at the state meets, Friday and Saturday at Tualatin Hills:

Notes: Jesuit has the inside track to its sixth consecutive championship. The Crusaders have seven No. 1 qualifying times, including the 200 medley and 400 freestyle relays, events they have won the last five years. They set the OSAA meet record in the 400 freestyle relay (3:07.67) last year. Jesuit's other top qualifiers are Simons (100 butterfly, 100 breaststroke), Marco Nosack (100 breaststroke), freshman Diego Nosack (500 freestyle) and sophomore Matthias Kreutzer (50 freestyle). … Central Catholic's Keil has signed with Penn. … Sherwood senior Jacob Folsom, signed with Grand Canyon, is the top seed in the 100 freestyle and 200 freestyle.

Notes: West Albany, runner-up last year, has an excellent shot at winning its first state title. The Bulldogs are seeded first in two relays and have No. 1 qualifiers in sophomore Luke Milburn (100 freestyle) and senior Dylan Hayes (500 freestyle). … Page-Jones will go for repeat titles in the 50 freestyle and 100 butterfly, but is seeded third and second, respectively, in the events. … Crater sophomore Marcus Reyes-Gentry, who won the 500 freestyle and 100 backstroke last year to become the Comets' first champion, qualified first in the 200 freestyle but was DQ'd in the 100 backstroke at district. … Reyes is seeded first in the 100 breaststroke and 100 butterfly.

Notes: Two-time reigning champion Newport lost key contributors to graduation but still is the team to beat. The Cubs are seeded first in the 200 medley and 400 freestyle relays, events they won the last two years. Shenks has the top qualifying time in the 100 freestyle and 100 backstroke and senior Luke Bachart is the No. 1 qualifier in the 500 freestyle. … Newport has nine top-six qualifying times, compared to six each from Madras and Marshfield. … Foord qualified first in the 200 IM and 100 breaststroke.

Notes: It is the final meet for one of the state's all-time great swimmers in Dobler, who as a sophomore set OSAA meet records in the 50 freestyle (22.35) and 100 breaststroke (59.89). She missed those marks as a junior, but with top qualifying times of 22.37 and 59.43, she could reset them and maybe challenge the national record in the breaststroke (58.40). The USC-bound Dobler, who will compete in the Olympic Trials this year. has three titles in the 100 breaststroke and two in the 50 freestyle. … Metro League rivals Jesuit and Sunset will battle for the title for the fourth year in a row. Jesuit edged Sunset last year after finishing runner-up to the Apollos in 2017 and 2018. … Lindsay, who has committed to Arizona, is going for her third title in the 200 IM, but is seeded second behind Jesuit sophomore Fay Marie Lustria.… Lustria also is the top qualifier in the 100 butterfly. … Sunset is seeded first in the 400 freestyle relay, an event it has won the last two years, setting an OSAA meet record in 2019.

Notes: Crescent Valley, which last year won its first title since a five-year run that ended in 2011, is among a cluster of potential contenders. Lomonaco and Criscione will be going for double titles for the second year in a row. Lomonaco is seeded first in the 200 freestyle and second in the 100 freestyle to Churchill freshman Kelsey Wasikowski. Criscione will go for a repeat in the 100 butterfly, where she is the top qualifier, but she has opted to forgo the 500 freestyle for the 200 IM, where she also qualified first. Criscione's freshman sister, Vivi, is the top seed in the 500 freestyle. … Wilsonville's Maoz, who has committed to LSU, is the two-time reigning champion in the 100 breaststroke. He qualifying time of 1:03.41 is faster than the 5A meet record (1:03.66) she set in 2018. … Churchill is the No. 1 qualifier in two relays.