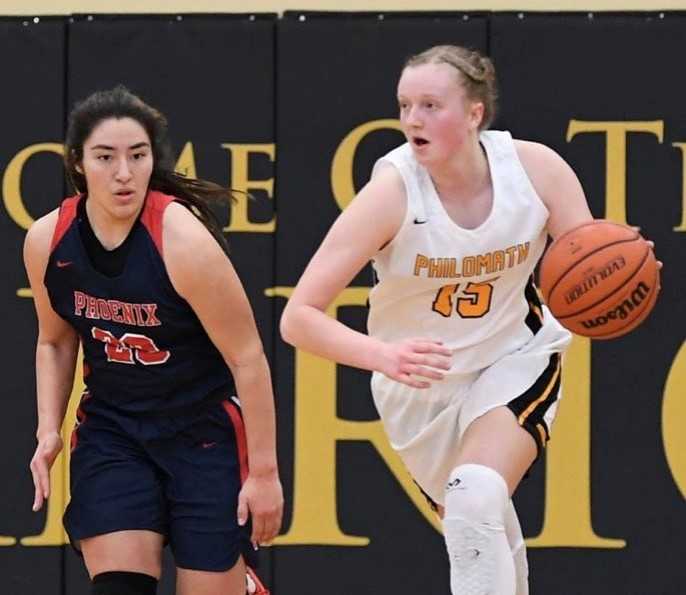 Philomath's Sage Kramer (15) has had a 23-point quarter and 30-point half this season. (Photo by Logan Hannigan-Downs)

Philomath sophomore Sage Kramer has been so good this season, she is starting to make the unusual look routine.

“When we look at the scorebook, we're just kind of used to it now,” Warriors coach Ben Silva said.

Philomath (24-1) carries the No. 1 seed into the OSAA/OnPoint Community Credit Union 4A girls basketball tournament at Forest Grove High School, and much of it has to do with sensational play of Kramer, a 5-foot-10 wing who has been putting up eye-popping numbers.

Against Woodburn, she set a state record by scoring 30 points in the first half, finishing with 40. Against Newport, she tied a state record with a 23-point quarter, ending up with 37.

She went 16 for 16 from the field in a game against Sisters. And in a second meeting with Woodburn, she came off the bench on senior night to put up a career-high 44 points.

“She can score the ball in so many ways,” Silva said of Kramer, who on Saturday scored 24 of her 35 points in the second half of Philomath's 66-40 win over Phoenix in the 4A playoff round of 16. “Defenses are focused on her, but she's still able to find ways to score, either inside or out.”

After averaging 17.9 points and 6.3 rebounds in a breakout freshman season, when she made first-team all-state for a 4A semifinal team, Kramer has found another gear as a sophomore. She is averaging team highs of 22.8 points and 7.5 rebounds, despite often taking an early seat on the bench in runaway victories.

What makes her so effective?

“She's pretty tall and long, and she's physical,” Silva said of Kramer, the Oregon West Conference player of the year. “And her finishing moves around the hoop are some of the best I've seen from girls at our level. She has a Euro-step move that you don't see very often. She can go up and under on the reverse side, which are skills we don't see too often at the 4A level.”

It helps that the Warriors have other threats – such as senior point guard Emma Pankalla (9.6 points, 5.8 assists) and junior post Mia Rust (10.9 points), both first-team all-conference picks – that opponents can't afford to ignore.

“We've seen some triangle-and-two, or box-and-one stuff, but other people can step up and score, so teams haven't been able to stay in that type of defensive look very often,” Silva said.

Kramer's game is defined by efficiency. Philomath's defense creates lots of turnovers, and Kramer rings up points in transition, often on the receiving end of passes from Pankalla. Also, her understanding of shot selection has “greatly improved” from last season, according to Silva.

“She's learned to get to the hoop early and see shots go in, and then start knocking down some outside shots,” Silva said. “Last year she shot more threes. She's done a better job of finding even better looks this year, and just taking threes when she's open.”

A change in Philomath's offense this season also has benefited Kramer. Silva, in his second season as coach, stripped down the offense to make it simpler. As a result, Kramer is able to freelance more using ball screens.

“We know she's pretty talented with the ball in her hands, so that ball-screen stuff is pretty good for her,” Silva said. “She's definitely grown in her understanding of our system, and how to get good looks out of our offense.”

A look at the tournament's first-day matchups:

No. 8 Cottage Grove (19-6) vs. No. 1 Philomath (24-1): It's been a brilliant season for Philomath, which won its first 23 games before falling to 5A West Albany 57-48. But after losing in the semifinals to eventual champion Baker last year, the title is the goal for the Warriors, who haven't won one since 2000. Philomath is ranked No. 1 in 4A on offense (57.8) and third on defense (33.3). Cottage Grove is back in the tournament for the first time since winning the 2010 title. The Lions lost standout post Reilly Kelty, who transferred to 6A Sheldon, but have gotten a big season from 6-1 junior post Matty Ladd (13.0 points, 9.0 rebounds), the Sky-Em League player of the year. Ladd makes an imposing front line with 6-1 senior Emma Gardner (9.0 points, 7.0 rebounds) and 6-1 sophomore Gracie Arnold (13.0 points, 6.0 rebounds), first-team all-league picks.

No. 5 La Grande (18-7) vs. No. 4 Astoria (22-3): La Grande is in the tournament for the first time since making the semifinals in 2016. Junior post Ella Dunlap (5-11) and junior guard Camryn Collman (5-9) were named to the Greater Oregon League first team. Dunlap, who had 27 points and nine rebounds in a win over Cascade in the round of 16, can score inside and outside. In one stretch against Cascade, she scored 18 of the team's 19 points. Astoria is ending an 18-year absence from the state tournament. Senior post Brooklynn Hankwitz (13.5 points, 6.0 rebounds) was the Cowapa League player of the year. Senior guard Hailey O'Brien (12.0 points) and junior guard Halle Helmerson (11.0 points) also provide offense. Helmerson scored 28 points in the round of 16 against Junction City. Astoria's only in-state losses came against Philomath and Valley Catholic.

No. 7 Valley Catholic (17-7) vs. No. 2 Baker (24-2): A rematch from Dec. 21, when Baker throttled the Valiants 66-34 in a tournament at Gladstone. Reigning champion Baker is making its fourth consecutive tournament appearance. The Bulldogs are winning with defense, holding opponents to a 4A-low 30.3 points per game. Senior guard Syd Younger (15.0 points, 6.0 rebounds, 5.0 steals, 4.0 assists) and 6-0 freshman post Jozie Ramos (14.0 points, 10.0 rebounds, 2.0 blocks, 4.0 steals) lead the way for Baker, which has lost only to 3A Burns and Banks. Valley Catholic enters with an eight-game winning streak that includes a 54-47 victory at Astoria. Junior guard Josie Napoli (13.9 points, 5.6 assists) and junior post Lauren Snook (9.1 points, 5.7 rebounds) spearhead the Valiants' attack. Napoli had 25 points in the round of 16 against Mazama.

No. 8 Gladstone (20-5) vs. No. 1 Marist Catholic (22-3): Marist Catholic, which made the quarterfinals last year after dropping down from 5A, went unbeaten in league play for the second time in school history. The Spartans are going for their first title since 2008. Their only losses came against Banks, Klamath Union and 5A South Albany. They won at Gladstone 48-30 in the season opener. Senior guard Nick Stice (11.2 points, 4.4 assists) was the Sky-Em League player of the year, and junior forwards Ben Morehouse (11.8 points, 4.1 rebounds) and Alec Vendetti (10.2 points, 4.8 rebounds) were first-team all-league. Gladstone's Jude Ashpole (12.0 points, 7.2 rebounds, 5.8 assists, 2.8 steals), a 6-4 junior wing, was co-player of the year in the Tri-Valley Conference. Junior post Jeremy DeVoe (14.9 points, 7.8 rebounds) was a first-team selection. Junior wing Brandon Wanlass (12.8 points) has made 60 three-pointers.

No. 12 Stayton (17-8) vs. No. 4 Henley (19-6): The teams met in the quarterfinals last year, with Stayton winning 57-53. Stayton is the lowest seed in the field after going on the road in the round of 16 to defeat No. 5 Banks 52-50 on a basket by senior Logan Classen with 5.1 seconds left. The Eagles, a semifinal team last year, are led by sophomore guard Jacob Axmaker (11.4 points) and senior guards Derek Berning (8.8 points) and Ben Rash (8.0 points, 4.8 rebounds, 2.9 assists). They finished behind Philomath, Cascade and Woodburn in the Oregon West. For the fourth time in five years, Henley won a league title and has reached the state tournament. The Hornets are holding teams to 40.6 points per game, second in 4A to Philomath. Matthew Neubert (14.5 points, 5.0 rebounds), a 6-4 senior guard, and Braden Lawrie (10.3 points, 5.7 rebounds), a 6-3 senior post, lead the team in scoring. Henley has won nine in a row since a three-game losing streak to Marist Catholic, Klamath Union and Phoenix.

No. 6 Woodburn (18-7) vs. No. 3 North Marion (20-5): Woodburn won at North Marion 73-66 in the season opener. Woodburn, which lost in the semifinals last year, is in the quarterfinals in back-to-back years for the first time in school history. All but two players are in their first varsity season for the Bulldogs. Junior guard Jeovanny Marroquin (11.2 points, 5.2 assists, 2.4 steals) was first team all-league and junior guard Jonathan Marroquin (8.1 points, 3.2 assists, 3.5 steals, 1.8 blocks) was second team. North Marion is averaging 68.2 points per game, tops in 4A. The Huskies feature the Tri-Valley co-player of the year in 6-2 senior guard Sergio Jimenez (20.7 points, 8.6 rebounds, 4.3 assists, 52 percent field-goal shooting), who poured in 38 points against Hidden Valley in the round of 16. Senior forward Johnny Page (12.8 points, 7.2 rebounds) was first-team all-league. In North Marion's nine-man rotation, seven are seniors.

No. 7 Klamath Union (18-7) vs. No. 2 Philomath (20-4): With two seniors on its roster, Klamath Union has reached the state tournament for the first time since 1984, when it lost to Beaverton in the big-school quarterfinals. The Pelicans have one of the state's most dynamic athletes in 5-11 senior guard Darius Holmes (12.5 points, 6.0 rebounds, 3.0 assists), who has signed with Seattle Pacific as a decathlete. Klamath Union's leading scorer is 6-5 junior Jacob Cook (14.4 points, 12.2 rebounds, 4.0 assists, 2.5 blocks), a power forward who is adept at attacking and scoring with either hand. Senior guard Xavier Arvizu (9.3 points, 9.0 rebounds, 4.0 steals), the quarterback on the football team, is the defensive stopper. Philomath, which won titles in 2014 and 2016, is back in the tournament after losing in the round of 16 the last two years. The Warriors made it by scoring the last six points in a 48-45 win over No. 15 seed Phoenix in the round of 16. Junior guard Michael Lundy (12.5 points) and 6-6 freshman Ty May (9.5 points, 5.9 rebounds) lead Philomath in scoring.