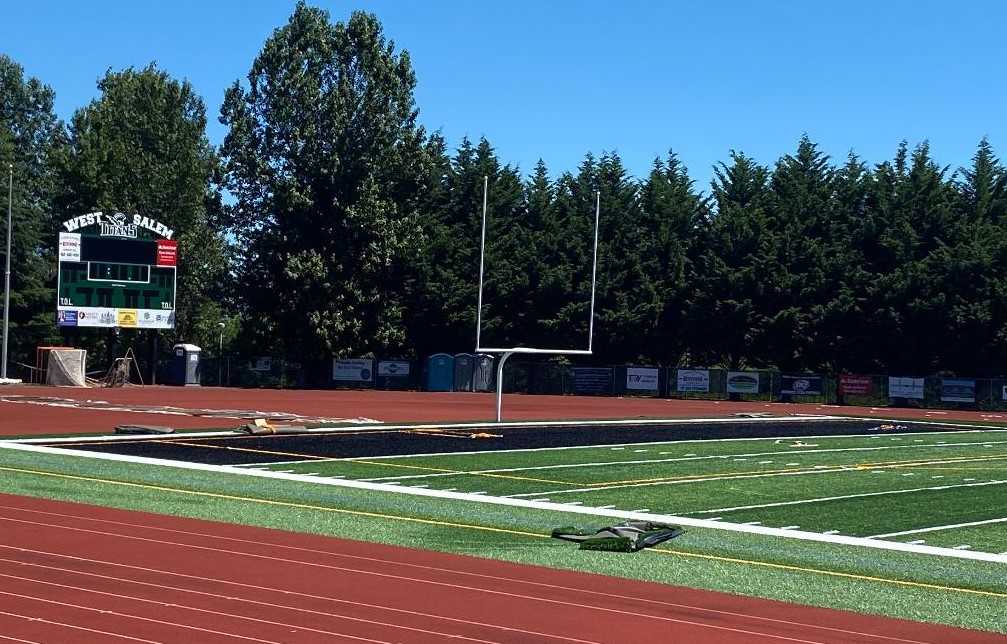 “The Black Hole” has vanished..

West Salem, which installed what was billed as the nation's first outdoor black artificial turf football field in 2012, has replaced it with synthetic turf that has a more conventional alternating, light-green, dark-green pattern.

The old field -- which appeared not unlike a parking lot – will be missed by many in the Titan community.

“I'm not the swag guy, the fancy uniforms, fancy field,” West Salem football coach Shawn Stanley said. “But it was cool. The kids loved it, the people loved it. It was something different.

“I'm getting a little older now, and I miss a nice grass field. It'll be more traditional. More than anything, I'm just glad we got a nice field. The kids won't be afraid to dive or fall.”

The six high schools in the Salem-Keizer School District are in a rotation to have a field replaced every two years. West Salem was behind South Salem and North Salem in the cycle, but the black field had deteriorated to such an extent that replacing it became a priority.

“We started having issues with our Gmax testing. It was getting pretty hard,” West Salem athletic director Bill Wittman said.

Last year, the district tried to soften the field by adding rubber in-fill.

“It just ended up that that's all there was, just the rubber sitting on the top,” Stanley said. “You'd go down to dive or catch a ball, or slip and fall, and you're getting torn up. There really weren't the fibers to support the in-fill anymore.”

West Salem had a green artificial turf field when the school opened in 2002. Ten years later, the community raised $437,000 to have it replaced, and got a price break when FieldTurf installed the overstocked black turf for $300,000.

“When you have to fund-raise in the community and pay for it, I believe there's a lot of pride that goes with that,” Wittman said. “I think people around here felt really prideful about the black turf.”

This time around, the district is paying for the FieldTurf surface, which cost a little more than $700,000. Workers finished installing the field last week but still need to complete the graphic elements.

The school will replace the interlocking “WS” at midfield with a Titan logo. The end zones will be black with “TITANS” spelled out in them.

Stanley said the new field will have extra padding below the surface.

“Before it was really just the crushed rock, and the turf, and the in-fill. There was really nothing underneath,” Stanley said. “Hopefully, this will be safer for the guys.”

Stanley remembers his first impressions of the black turf and thinking about the potential impact on games. Perhaps the black field threw off opponents, but it's hard to know if the Titans gained any advantage.

“I really wondered, if we were a wing-T team, with dark uniforms and a dark football, how hard it would've been to see,” Stanley said. “I've asked our quarterback several times, 'Do you have trouble seeing our guys against the black?'”

There was no question, though, that the black surface could heat up fast. Studies have shown that on sunny days, black fibers can make fields four to five degrees hotter than green fibers.

“When it's 95, all those fields are hot. Ours was just a little bit hotter,” Stanley said.

Ultimately, though, Stanley is grateful that the district has invested in a field that will benefit the West Salem community.

“With everything going on, fields aren't the No. 1 priority, but ours is used a lot, and we want kids to be safe,” he said. “It was awesome that the district stepped up, and we're going to have a safe surface. Playing on it this year would've been tough.”