New school gives Sherwood athletics 'more room to expand'
Tweet
The Bowmen, who outgrew the facilities at their old campus, will move into a complex that features five artificial-turf fields
July 10, 2020 by Jerry Ulmer, OSAAtoday 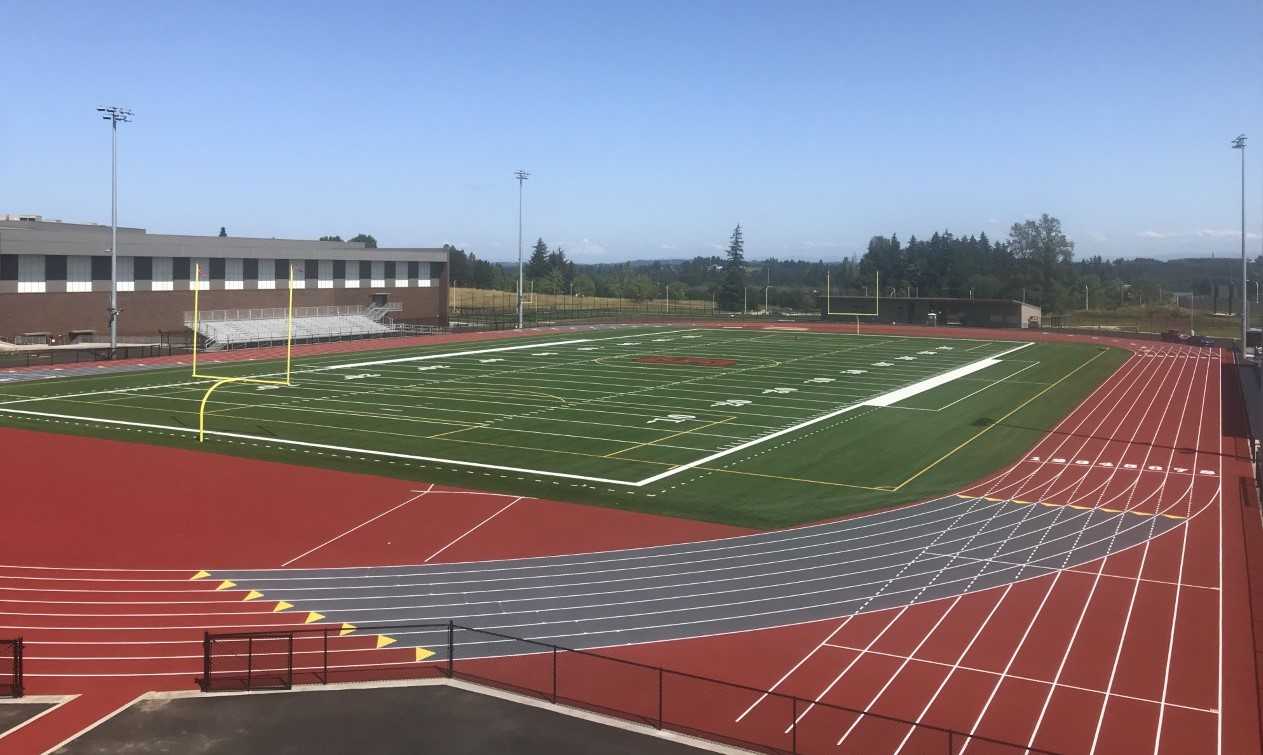 As Sherwood High School was bursting at the seams in the last two decades, and undergoing remodels, its athletic facilities became taxed.

When the school moved into the campus on Southwest Meinecke Road in 1971, Sherwood was in a league with current 3A schools such as Amity and Dayton. Now, with an enrollment pushing 1,700, it faces off with the state's biggest schools in 6A.

For years, the school struggled to accommodate its students and athletes.

“Everything was just pieced together and never quite worked correctly,” said athletic director Randy Ramp, who has seen enrollment more than double since he arrived in 1998. “It was a nice school, but it was time for us to go someplace where we have a lot more room.”

Now, thanks mostly to a $250 million bond that was passed in 2016, that time has come. Sherwood is moving to a campus two miles away on Southwest Haide Road, where its students and athletes finally will have the space they need.

“All our coaches are super excited about the new facilities,” Ramp said. “Much more room to expand and practice on. We now have a 6A complex, where in the past we were patching everything together to play.”

“Plenty of places to practice, which we've never had in the past,” Ramp said. “We're not sure what to do with all of it.”

The school also will have access to the facilities at its former campus, which will become a middle school.

“If our football coaches had their way, they'd play all of their varsity games over there,” Ramp said of the old campus. “They love that facility with the tunnel coming out from underneath. The new one doesn't have that. It's a little different.'

The stadium is similar in size to the one at the old campus. The covered grandstand on the home side has views of Mt. Hood and Mt. St. Helens. The scoreboard also is similar, although the booster club is hoping to raise money to upgrade to a video board in the near future.

One drawback: To save on the cost of an elevator, the press box was installed below the roof, creating views that are partially obstructed by support poles.

“The coaches aren't happy about it,” Ramp said.

Ramp said the gym is “amazing,” comparing it to the one at newly opened Mountainside, six miles away. It has plenty of natural light, a second-level entrance and a capacity of 2,000, up from 1,400 at the old gym.

“The problem with the old school is you couldn't pull the bleachers all the way out because you needed seats for the players,” Ramp said. “When everything was out, it probably only seated 1,000. Much better now. A lot of room.”

The wrestling team, which practiced behind the upper bleachers at the old campus, now has its own gym. The tennis teams, who previously had to use middle school facilities, have four new courts.

Unlike before, varsity and sub-varsity soccer teams can practice at the same facility, as can basketball teams, some of whom were forced to use the middle school.

Ramp said that the cross country coaches are “itching to get out there and measure off” a course at the new campus, even if they still have a soft spot for their former home.

“We really liked the old place we had,” Ramp said. “We had really great times and a great track going around our school. We might host a couple meets at the old school yet.”

The 350,000-square foot school is built to accommodate 2,000 students. It sits on 73 acres that have sweeping views, perhaps none better than at the varsity softball field.

“You sit there at home plate, you have just a panoramic view of Mt. Hood and Mt. St. Helens,” Ramp said. “It's just amazing.”

One of the major bonuses of the new school is ample parking. It often spilled over into neighborhoods at the old school, especially for football games, but the two large lots at the front of the school and two lots on the other side should be more than sufficient for most events.

Construction on the complex finished this week with the painting of the track. The OSAA plans to tour the facilities this month to review it as a potential site for state championship events.