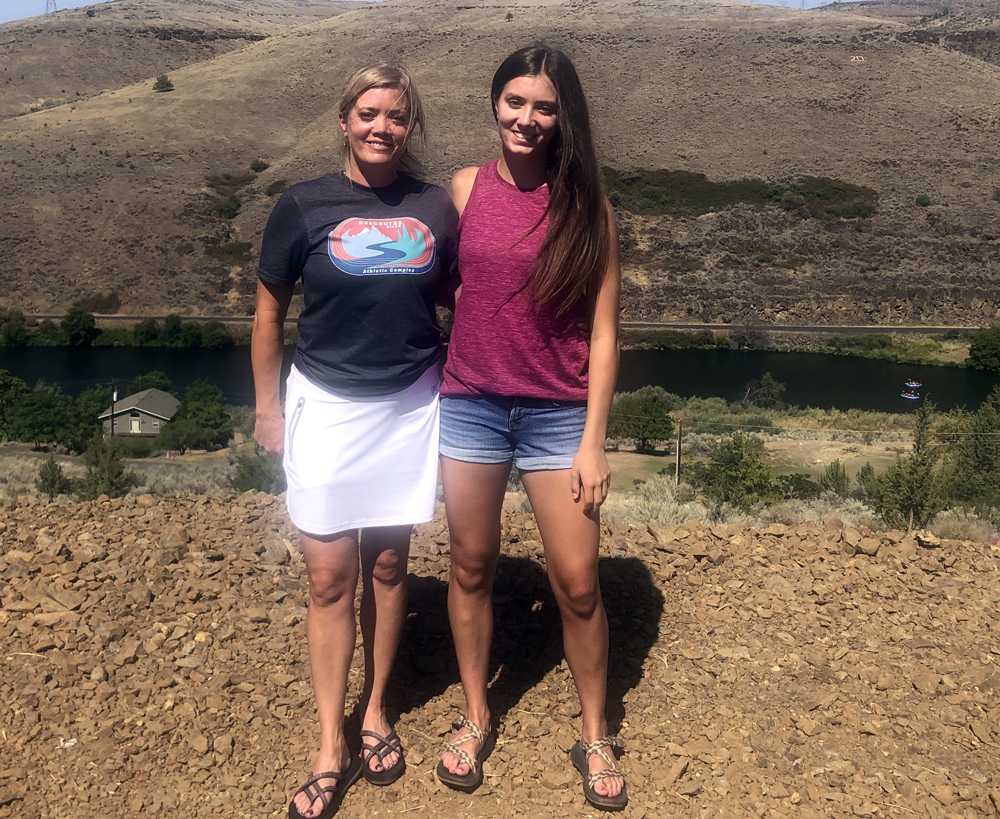 Holly Miles, right, and mom, Susie, pose on the new fill that will be part of the 200m corner at South Wasco County HS

Sixteen-year-old Holly Miles has been running on the odd, pear-shaped cinder track at South Wasco County High School her whole life. Sitting in class, she watches as residents of Maupin use the track for exercise or to walk their dogs.

Holly’s mom, Susie, a South Wasco County alumna and current volleyball coach, ran on that same track when she was a youngster.

It is absolutely unconventional – one lap around is 474 yards – a source of attention, some embarrassment, definitely a landmark.

And now, 46 years after the Redsides were last able to host a home meet, it’s time for the track to go.

Residents of Maupin, a town of 430 in Eastern Oregon situated on a shelf above the scenic Deschutes River, are thinking big: the establishment of an athletic complex at South Wasco County to foster community pride, give the town a sparkling new athletic resource and boost the community’s economy. If all goes as planned, Holly Miles and her teammates will be running and hurdling on a new state-of-the-art polyurethane track by next spring. No sprained ankles from the uneven crushed lava surface there presently. No setting up practice hurdles on the long jump run. A perfect oval, which connects residents to the school and to one another. A perfect oval, which proves the American dream that a small town working together can accomplish big things.

Holly Miles was in eighth grade when she’d had enough.

“Why don’t we get a real track?” she asked her parents.

She’d asked the question many times before. So had many others. It seems like there’d been plans for a new track ever since the bizarre loop was first put down, bordering the small patch of grass where the Redsides baseball team once played and where the 6-man football team saw some success last fall. Actual plans were drawn up more than a decade ago now, but never got off the ground when the manpower the town needed to move the dirt, in the form of the National Guard, was deployed overseas.

When Holly asked her question this time, her parents had a ready response.

“Why don’t you do something about it?”

She started by talking to her schoolmates. They told her it was a crazy idea. If it had been this way for more than 30 years, why would it change now? When Holly talked to more seasoned community members about her vision, no one said “no.” They started to see it as possible; they started to imagine the possibilities.

A committee formed. A fundraising plan was created.

“The town itself can’t fund this,” Susie Miles said. “We’re not going to put in a new track by having a bake sale, so we had to think outside the box.”

The community, which is centered around the school, bought into the idea completely.

“When Holly started talking to people, it spawned a great group of volunteers who all had something to bring to the project,” Susie explained. “Without all that diverse talent and energy, it wouldn’t have gone anywhere. That’s what makes projects in small towns work.”

The Deschutes River Athletic Complex project, as it is being called, has received boosts from outside Maupin, notably by people like Michael Bergmann, president of Portland Track. He saw the picturesque setting, the abundant sunshine and the recreational opportunities in and around the town and envisioned a world-class training center and a venue for international time trials.

Holly liked the idea of being able to train in the same place as professionals. Susie thought the track complex would impact the town’s economy, extending the business opportunities from just summer into the spring and fall.

“We’re building this track for everyone’s use,” Holly said.

Phase I of the project includes the eight-lane track, which would allow the school to hold District track meets; alignment of the football field with improved spectator seating; working lighting for nighttime events and a new concessions area. Future plans contemplate a band shell for concerts overlooking the river and other amenities that could turn the DRAC into a year-round outdoor experience.

Work on Holly’s idea is well underway. In late July, the Oregon National Guard 224th Engineering Battalion arrived in Maupin and spent two weeks turning the slope overlooking the river into the 200-meter corner. The momentum and excitement build every day. So far, the DRAC has raised $500,000 in cash and in-kind contributions from all over the country. About $1.1 million more is needed to bring this project to completion.

Susie Miles is convinced that it will happen.

“We don’t think ‘no,’” she said.  “We want to think that it is going to happen. Positive thinking is what’s taken the project from an idea to where it is now. Maupin is a tourism town. It’s what makes the economy work. This is going to be an added bonus to that. Everybody is excited about it. There’s really no, ‘It can’t happen.’ It’s going to happen!”

“I sit in class and look out the window and see the track and it’s so surreal that it could actually happen,” she said. “Thinking about having the facility complete and running a race on here is totally mind blowing.”

“It would be so crazy satisfying,” she added. “As a young kid, everyone has those dreams that they know aren’t really going to happen. But to have one that could come to life…that would be amazing!”

Please visit https://www.maupindrac.org/ to learn more about the project. Donate if you can. Dreams can and do come true in small towns like Maupin.

Feel Good Stories will hopefully run every Wednesday for the immediate future. Do you have a feel good story idea? Share it by emailing johnt@osaa.org.