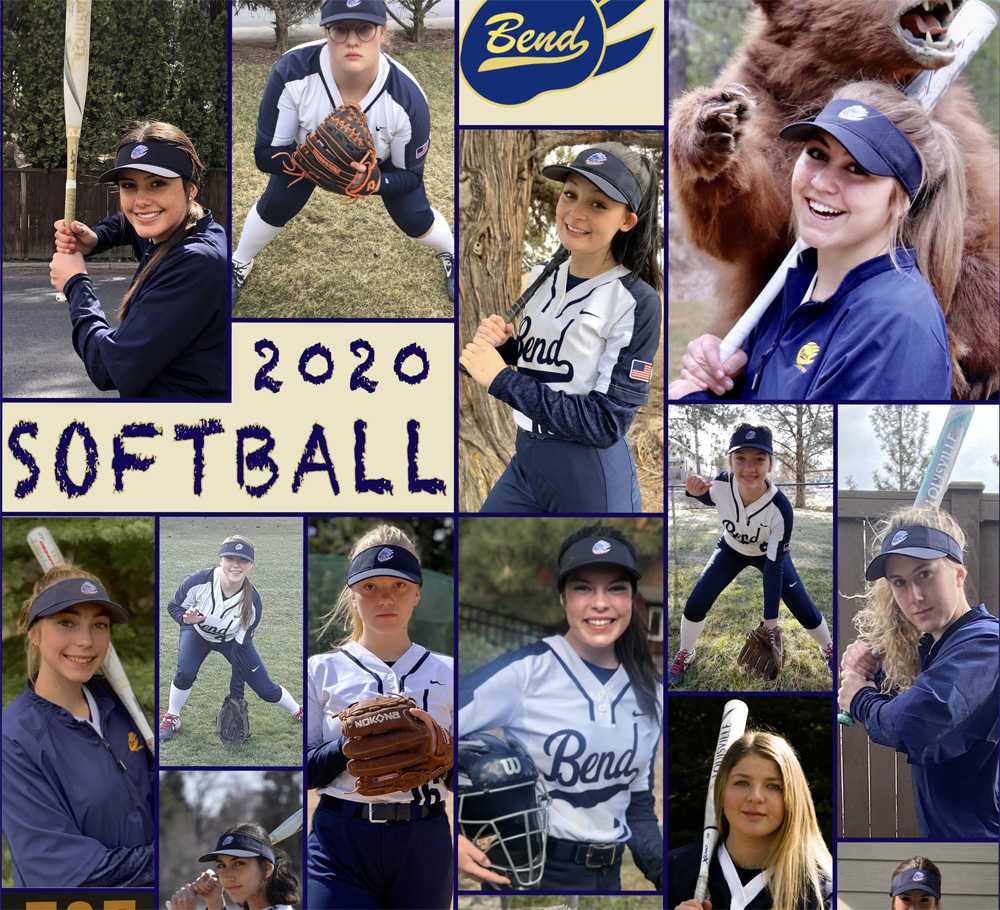 Here are some of the authors of "Zombie, I Guess" from the Bend team poster. The poster's verticality prevented full inclusion.

[Editor’s note: The idea behind “Alphabet Stories” is to write one noteworthy athletics-related story about each OSAA-member school. We started with Adrian HS on Sept.18. Today’s story is about Bend HS. The goal will be to write two per week. While we will be relying upon athletic directors to furnish story ideas, anyone may offer suggestions by emailing johnt@osaa.org]

The softball team at Bend HS may not have had a 2020 season (thanks, COVID!), but that did not stop the Lava Bear players from discovering plenty of ways to stay busy and engaged during the March lockdown and afterwards.

“They have been very active during the pandemic,” said head coach Tom Mauldin about his bright and articulate group, which boasts a team GPA higher than 3.6.

Among the highlights was a COVID-themed snowman contest, a squat contest where the girls squatted unusual things like pets and one another, filming a PSA on how to stay safe during COVID and hosting three summer camps for Bend Parks & Rec. There have been summer and fall workouts and, starting in November, there will be a month-long drive to collect Christmas presents for children who lost everything in the Detroit-area fire.

There also have been dead zombies. Lots and lots of zombies, thanks to a book the team wrote, collectively, entitled “Zombie, I Guess.” The book was Mauldin’s brainchild; the theme was not.

“In all honesty I didn't have a vision for the book other than I wanted them engaged in a team activity and a progressive assignment seemed like a win-win,” Mauldin said.

Mauldin selected current junior Lena Zahniser to write the opening chapter. She set the theme for the book. Thirteen other players were then randomly and anonymously assigned the ensuing chapters.

The only instructions were:

2. Keep it clean. This is something parents and grandparents will read.

3. A main character (or characters) or scene must remain throughout the story. Their adventure might change, but the character must stay the same.

4. If there was a problem that needed to be solved and one writer solved it, the writer must provide another challenge in its place for the next writer and so on.

The book kept the team engaged for weeks and weeks, although its actual completion took about 14 days.

“We gave the girls 24 hours (more if they needed) to write their chapter,” Mauldin explained. “Some turned it around in a couple of hours; others took a day or more. Most chapters were 600-750 words. Some topped 1,000.”

Zahniser, a team leader with a big personality, not only determined that the book would be about murderous zombies infected with COVID roaming the city of Bend, she [spoiler alert!] killed off the team’s coaches, parents AND herself all on page 1!

The story follows the team as it tries to assemble in a safe space with zombies all around them. Once together, saving one another from the ongoing murderous rampage was all that mattered. They went from house to house and to the refurbished locker room at the high school before making a dash for the coast to safety.

“There were a lot of team-oriented things in the book,” Mauldin noted. “There were many references to FOE (‘family over everything’ – a wristband the players wear) and they risked their lives to save their teammates. There are phrases from the book such as ‘we can survive as a team,’ ‘coaches would be proud of us,’ ‘we can do this together,’ and ‘ITLT (It's the little things).’ Thus, the book was a great lesson in TEAM and counting on one another.”

“The book was a fun assignment for the girls,” Mauldin continued. “We had Costco produce one hard copy, which will be placed in our ‘We will never forget COVID19’ locker in the new locker room.”

Does this mean that zombies will be with Bend softball forever?