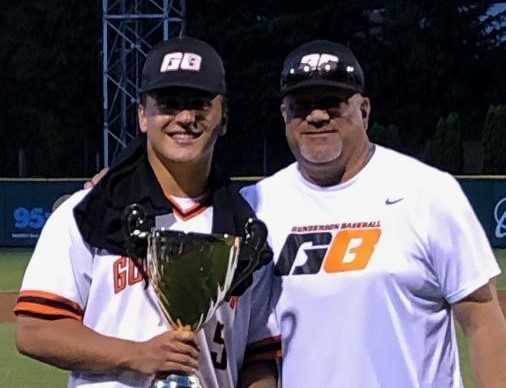 Jackson Jaha (left) has a knack for driving the ball to the opposite field, much like his father, John.

It all happened before he was born, so Jackson Jaha has to rely on old videos to bear witness to his father's days as a Major League Baseball slugger.

“It's so cool. It's like, 'Dang, that's really you?'” the Clackamas junior said.

Now it's starting to look as if Jackson, who committed to Oregon in July, has a chance to follow in his father's footsteps. The 6-foot-1, 205-pound Jackson has bulked up in the past year and is resembling his barrel-chested father now more than ever.

Jackson – an all-league utility player for the Cavaliers as a freshman in 2019, when he hit .350 – often hears the comparisons.

“A lot of people, my mom and stuff, say it's crazy how similar we are,” Jackson said. “Since I've put on this muscle, I think I've kind of gotten like him a lot more, in power hitting. I want to get up to 220 so I can be just like him. That would be perfect.”

John Jaha – the second player ever to hit a ball into the upper deck at Denver's old Mile High Stadium – said that Jackson is stronger than he was as a high school junior.

“He's definitely further along than I was, for sure,” John said. “He's a better baseball player at this stage of his life than I was. I was kind of a raw athlete who just wanted to swing the bat. I didn't really work on any specific things in the offseason. I played three sports.”

His sophomore and summer seasons foiled by COVID-19, Jackson has taken the time to work on his body, adding about 35 pounds from his freshman season. He was able to flex that muscle when he competed at events in Arizona and California this year.

“I'm a lot stronger. I noticed that right away,” said Jackson, who also plays basketball at Clackamas. “The ball is jumping off my bat a little bit more this year. The first games I started playing, I felt like I improved a lot.”

John Jaha said it wasn't until he got into the minor leagues that he began to fill out and develop as a power hitter. Jackson is ahead of that pace.

“He's gone to a different level as far as bat speed and strength and the way he drives the baseball to the gaps,” John said. “It's pretty impressive, really. I don't see a lot of kids at that age able to use the whole field and also have the power to hit those balls to the gaps. He's developing right on par where he should be with a couple more years left.”

Jackson is showing a knack for opposite-field power, one of his father's traits.

“That just kind of came natural to me,” Jackson said. “As I've hit more, and I've gotten stronger, he says it's just like him. I kind of take balls the other way, and I can go pretty far. He says we're pretty similar. My stance is a little different than his was, but the swing is pretty similar.”

Oregon, Oregon State, Portland and Washington State were among the schools interested in Jackson before Oregon began to push hard and came through with an offer this summer.

“Oregon came out of nowhere a little bit,” Jackson said. “I talked to them for about a week or so, and then they offered me. They've always been kind of my dream school. Close to home, good football and baseball teams, all of them are all so cool. It was one of the best decisions for me.”

Jackson is likely to play third base or first base at the next level, but he also could contribute as a pitcher. He touched 91 mph this summer and has started to iron out the control issues that have plagued him in the past.

“This is the best I've looked on the mound,” Jackson said. “This year, something just clicked, and I've walked hardly any guys. I definitely dialed it in this summer. If the opportunity came about, I'd definitely want to pitch at Oregon.”

If Jackson plays college baseball, it will be a departure from the path taken by his father. John was committed to Oklahoma State before being drafted and signed by Milwaukee out of high school.

The 2022 MLB Draft is a ways off, but it could be an X-factor if Jackson continues to blossom.

“He has two more years to get better and stronger,” John Jaha said. “I don't think about it too much. For me, I'm just getting excited about college. I'd love to see him go to college and play some baseball there. If something happens and he gets drafted, that's icing on the cake.”

If he doesn't go pro, he would be pushed in the highly competitive Pac-12.

“When we first started talking about it, I was a little nervous about him getting caught in those big programs where you have a ton of great players,” John Jaha said. “You walk into a program like that, you could be sitting on the bench a little bit. He said, 'I'm OK with it. I think I'll get better playing with guys like that.'”

Jackson has three older siblings: Jordann, Ashlee and Bubba, all Clackamas graduates. Bubba was a shortstop for Clackamas teams that won the 6A title in 2017 and finished as runner-up in 2018.

John Jaha, who moved from Camas, Wash., to Happy Valley in 2007, helped coach his children in youth sports through 2015.

“As my boys have gotten older and into high school, I've kind of been backing off, and just enjoying watching them,” John said.

Clackamas has benefited from his baseball knowledge.

“I secretly tell people, 'He's my No. 1 scout,'” Arntson said. “He knows everything about everybody.”

Jackson said his father's influence has been “everything” to him in baseball.

“Just having him in my corner, so much guidance,” Jackson said. “He's taught me pretty much everything. He's been huge. It's awesome. To hear the stories he has and stuff has helped me so much. He's definitely the biggest factor in my baseball career.”

Jackson said he wishes he could go back in time to watch his father play in person, but the old videos will just have to do. John "flies under the radar" as an ex-Major Leaguer, according to Jackson.

“He's really humble, and kind of shy,” Jackson said. “He hates talking about himself. I like to brag about him a little bit. It's hard not to.”