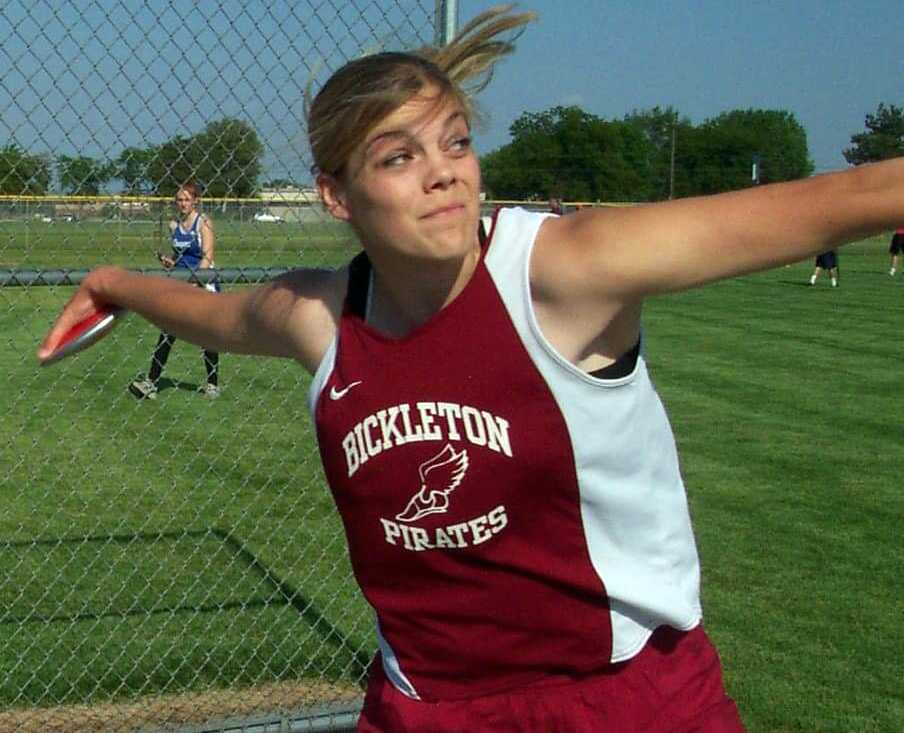 [Editor’s note: The idea behind “Alphabet Stories” is to write one noteworthy athletics-related story about each OSAA-member school. We started with Adrian HS on Sept.18. Today’s story is about Bickleton HS, one of the newest schools to join the Association. The goal will be to write two per week. While we will be relying upon athletic directors to furnish story ideas, anyone may offer suggestions by emailing johnt@osaa.org]

Over the past 40 years, Bickleton High School has had 250 seniors graduate.

In 2020, the graduating class was seven students. All boys.

In 2005, only four received diplomas. One was the daughter of a rancher. She would become a three-time collegiate national champion in the discus and come within a stone’s throw of making the U.S. Olympic Track & Field team.

Top athletes can come from anywhere if they have talent, determination and unrelenting work ethic.

Annie Hess grew up on a fifth-generation cattle ranch located 30 minutes outside of Bickleton, a Washington town, 65 miles south of Yakima, dubbed the “bluebird capital of the world,” with a total population of 90.

“I feel blessed to come from a small town,” said Hess. “My parents instilled in me the work ethic that helped me excel in sports.”

Until this fall, when it joined five other schools crossing the Columbia River to play sports, Bickleton competed athletically in its home state. The Pirates have been playing sports for more than 100 years but they only have one team state title in any: the boys track & field team, in 2016.

Hess is one of only four individual girls state champions for Bickleton and the only one to win state in more than one event.

Hess was busy with sports from a young age, following in the footsteps of her father, who played soccer collegiately; and her mother, a high school hooper. She would grow to six-feet tall with long arms, ideal for volleyball, basketball and the throws in track & field. She played volleyball until her senior year and basketball for five years, having been called up to varsity as an eighth grader. Indeed, the girls basketball team had so few numbers that, one year, after two fouled out, the team finished out a win with only four on the floor.

Hess thought that she was going to play basketball in college but decided that she liked track & field better and focused her attention in that direction. That’s interesting, because she almost didn’t participate in track for the high school.

“I threw in junior high and the high school coach wanted me to try out,” Hess explained. “But he required everyone to do a running event. I hated to run and didn’t want to. I told him if I was going to turn out for track that I would only be throwing. We shook on it.”

Hess competed in shot put and discus at state her junior and senior years in the B classification, the smallest in Washington state. As a junior, she won state in the shot and placed second in the discus. Hess broke the state record with her throw in the discus before another competitor broke the record right after her to win the title. As a senior, Hess’ state record throw of 146-10 not only won Class B; it also was the top mark across all classifications. She was a repeat champion in the shot put.

Hess moved on to throw for Concordia University in Portland. She was the first track signee in the history of the program, which began in 2006. Hess was recruited to Concordia after her uncle, then-Bend Principal Mark Neffendorf, recommended her to Randy Dalzell, who was leaving Bend to become the first track coach at Concordia.

Hess almost didn’t throw for Concordia. When first recruited, she told Dalzell that she wouldn’t enroll unless the school had a throw coach. She recommended Olympic Gold Medalist Mac Wilkins, whom she worked with while in high school.

“I wanted to work with Mac,” she said.

Concordia hired him and the result was three NAIA national championships in the discus for Hess and a US ranking of as high as eighth nationally in the event.

Was she surprised to be so good?

“I never thought of it like that,” Hess said. “I enjoyed and was obsessed with it and was always working at making myself better.”

Today, Hess goes by the name, “Ánnie McIntosh.” She is mom to two young boys – future star athletes for sure – and she lives in Yakima.

“I loved where I grew up,” she explained. “After graduating and going to college in the city, I appreciated it even more and wanted to bring my family back to a place that has a small town family feel like I grew up in.”