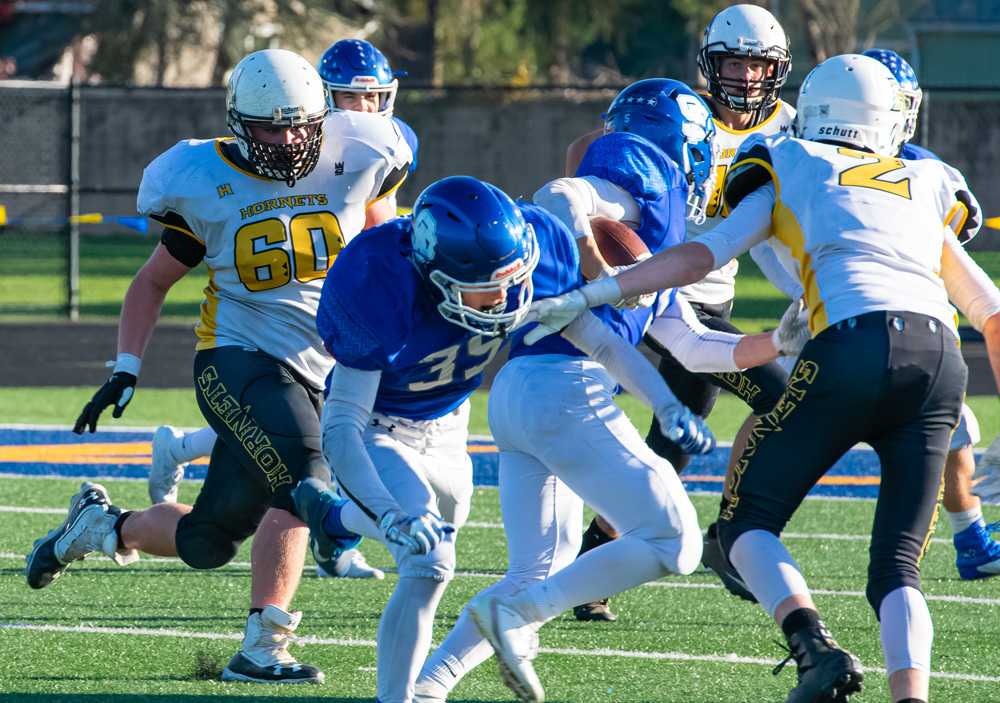 Max Brown (60) and Collin Ewing (2) close in on a ball carrier. Camas Valley traditionally has a hard-hitting defense.

[Editor’s note: The idea behind “Alphabet Stories” is to write one noteworthy athletics-related story about each OSAA-member school. We started with Adrian HS on Sept.18. Today’s story, more than two months later, is about Camas Valley HS. The goal will be to write two per week. While we will be relying upon athletic directors to furnish story ideas, anyone may offer suggestions by emailing johnt@osaa.org]

Down in Douglas County, 26 miles southwest of Roseburg, 25 young men representing Camas Valley HS have been getting ready since July.

For some, like four-year lettermen Max Brown and Collin Ewing, preparing for football season is familiar. For others, freshmen who’ve spent years, as youth, watching from behind the end zones on Saturday afternoons while smoke wafts from the grill where Mary Helen and Everett Banks are flipping burgers, putting on the Hornet uniform for the first time has been the stuff of dreams about to become reality.

Camas Valley may be a logging community but make no mistake: it definitely is football country.

Football began here 70 years ago playing six to a side. The Hornets started playing 8-man football in 1960, won consecutive state titles in 1963 and 1964, and have been a power in the 8-man game ever since. Camas Valley has captured six football state titles, the only state titles in the history of the school.

“We have hard-working kids in this community,” said second-year head coach Keri Ewing, a Camas Valley alumnus. “The love of football is passed down. Come to a game; it will blow your mind how many fans we have.”

The past decade has been the most fruitful in Camas Valley’s rich football history. The Hornets won state titles in 2011 and 2012, reached the semifinals or better four other times and have been in the 1A playoffs every year.

The 2020 season would have been no different. Ewing said 80 percent of the boys in the 65-student school are out for football. They are hoping that COVID-19 won’t stop them from donning the shoulder pads this spring.

“We were probably a top five team again this year,” said Ewing. “We lost some really athletic seniors but I feel like our offensive line got better and our young quarterback got better. We don’t have as much speed but are bigger and stronger and would have been able to run to run the ball really well.”

Ewing said that the key to Camas Valley’s continuing success may have been the junior high tackle football program instituted in 2006.

“That helped a lot teaching kids,” he said. “They play 8-man, too, and learn about how to play before starting high school as ninth graders.”

When Camas Valley does finally get to play football again, the Hornets will be doing so under the lights on Friday nights. The team always played day games on Saturdays but, last year, Camas Valley rented lights for the final home game, then worked hard in the off-season re-doing the field complete with permanent lighting.

The idea for lights dates back to 2004, when then-coach Eli Wolfe started a tradition of practicing at midnight the first day the players could be on the field. Floodlights from the bleachers and car headlights illuminated the field. The players went through conditioning drills for an hour then pitched tents on the sod for a night under the stars. The tradition has continued every year since.

The football program has other traditions also. Camas Valley never announces its individual players. The team runs onto the field as one, the Camas Valley Hornets. After every game, win or lose, the fans line up on the sidelines to high five the team. With 500 partisan fans or more for a rivalry game, that’s a prescription for sore palms!

Practice at Camas Valley stopped in November. You can only practice and play passing league games for so long without putting on pads. Now it’s a waiting game; waiting for the go-ahead to have a season these boys and the community have been waiting for, a season that Camas Valley has known every year for the past 70.

When it does finally happen, one thing is certain: Camas Valley will be ready.