Alphabet Stories: Central Catholic HS
Tweet
Practice gets better with a little help from above
January 4, 2021 by John Tawa, OSAAtoday 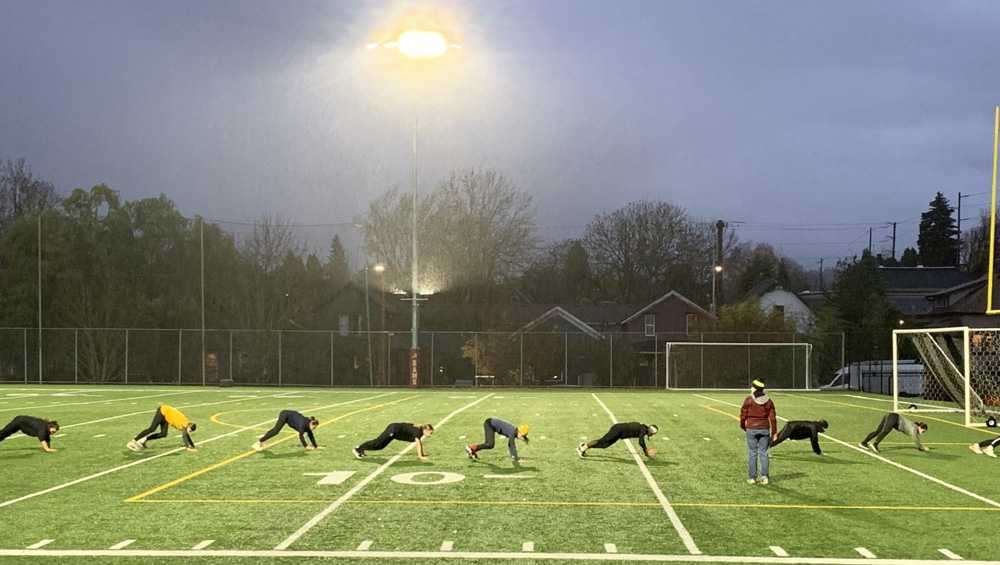 [Editor’s note: The idea behind “Alphabet Stories” is to write one noteworthy athletics-related story about each OSAA-member school. We started with Adrian HS on Sept.18. Today’s story, more three months later, is about Central Catholic HS. The goal will be to write two per week. While we will be relying upon athletic directors to furnish story ideas, anyone may offer suggestions by emailing johnt@osaa.org]

“Let there be light” is a well-known Old Testament phrase pertaining to the creation of the universe.

At Central Catholic HS in Portland, the phrase took on a different meaning this summer when lighting was installed on the school’s practice field.

“It has been great having our athletes here on campus participating in strength and conditioning cohort workouts,” noted athletic director Laura Jaeger.

When Central Catholic first opened more than 80 years ago, its campus had a dirt field that was used for recreation and sporting activities. The field was first turfed in 2004 and re-turfed in 2018. The Rams’ vaunted football team practices there, as do the soccer teams a bit, baseball, lacrosse and softball. The field isn’t suitable for competitions because it’s not large enough to accommodate big crowds and the school is intent on being a good neighbor to the surrounding residents.

While Central Catholic’s outdoor teams have always had to find alternative venues for games and matches – football currently plays at Hillsboro Stadium, soccer, lacrosse and softball at Delta Park, baseball at Walker Field, among other places; and track & field at Fernhill Park – the on-campus field limited further disruptions to the student-athlete experience by giving players a place to practice on non-game days.

The field, however, wasn’t any good when the sun went down. In November, when the football team is preparing for its annual playoff run – the Rams are the defending 6A champions – the sun setting before 5 p.m. means limited to no ability to practice at the school.

“Over the years our Novembers have been spent on the road for practice,” said head football coach Steve Pyne. “To my best recollection, here is a list of the places we have practiced during the playoffs: Milwaukie HS, David Douglas HS, LaSalle HS, Milwaukie HS baseball/softball complex, Hillsboro Stadium and Providence Park. This has added a layer of logistic complications throughout the years, but we have managed to deal with the challenge.”

The lights, which were first put to use on Sept. 30, will change all of that.

“During a regular fall season, football and soccer will be able to practice up on our field for the entire season,” said Jaeger.

“The ability for our outdoor athletic teams to be able to stay on campus for practice will be a tremendous asset and, over the long haul, save our school some money,” added Pyne. “There have been a lot of hours, by both athletes and coaches, traveling to various locations for practice.”

The new lighting will be especially welcome during the current COVID-19 pandemic. Currently, football is set to begin practice early in February, with soccer following a couple of weeks later. Calls for return to in-person learning, shorter days and overlapping sport seasons mean the demand for practice space at Central could soon be greater than they have ever been.

The lights mean every team can practice on campus without having to go too far afield.