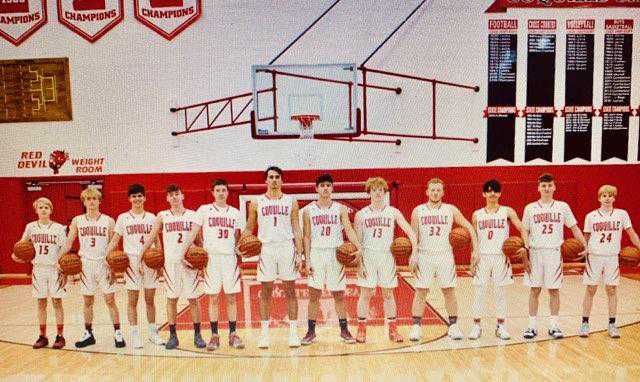 Coquille's boys joined the girls at state in 2020, marking the first time in 44 years both were in the tournament simultaneously

[Editor’s note: The idea behind “Alphabet Stories” is to write one noteworthy athletics-related story about each OSAA-member school. We started with Adrian HS on Sept.18. Today’s story, more than five months later, is about Coquille High School. The goal -- to write two per week – was sidetracked for a week by the ice storm that hit greater Portland, but we’re back! While we will be relying upon athletic directors to furnish story ideas, anyone may offer suggestions by emailing johnt@osaa.org]

Coquille is a town of 4,000 in southern Oregon, 20 miles from the Pacific Ocean. Timber harvested from the Coast Range is the town’s major industry.

The passion, however, is athletics.

High school teams that thrive are celebrated, like the girls basketball team at Coquille, which has earned a state tournament trophy for five straight years.

Teams that suffer adversity also are supported, but their struggles are well known, even when left unspoken. It is only natural for pressure to mount with each season where expectations go unfulfilled.

So it was for the Red Devil boys basketball team heading into the 2019-2020 season. The team was working on a streak of 16 straight seasons without an appearance at the state tournament, a drought exacerbated by the success of the girls team. Twelve times Coquille lost in the game to get to the state tournament, including nine in a row from 2011 to 2019. Sometimes it was a bad call that doomed the Red Devils. At other times it was an untimely injury or two, or an unfortunate draw against a challenging opponent, or an excruciatingly close game, like the four-point loss in 2016 to eventual state champion St. Mary’s. But at all times it was a loss and a “You’ll get them next year” from the Coquille faithful.

That all changed last February, when the Red Devils dominated Grant Union to punch their ticket to the 2A state tournament in Pendleton, which is clear on the other side of the state.

“It was a great relief to the school, community and team when they made it to Pendleton last winter,” said John Gunther, editor of The World in nearby Coos Bay.

“That was for all 17 senior classes, all 17 teams that didn’t get to go,” senior Ean Smith told Gunther for a story in The World. “We finally put all the pieces together. We get to go to the big dance.”

Three months earlier, from the very first practice in fact, Coquille’s third-year head coach, Willy Layton, and his team were determined to reverse what was called “the Coquille curse” around town. Layton is a Coquille grad and was a sophomore on the 1989 team that made it to state.

“I knew about the streak,” Layton said. “Everybody talks about it. We’ve had so many close calls…”

A 14-year drought followed the 1989 state tournament team. In 2003, the Red Devils not only broke that streak; they made it to the 3A championship game. The following year, Coquille lost to eventual champion Creswell in the game to return to the state tournament and another ignominious streak was born.

Athletic director Dan Hampton was an assistant coach on the 2003 tournament team.

“I would never have imagined that it would take us 17 years to get back to the final site,” he said. “We had some competitive teams that caught some tough breaks and drew some strong opponents. I remember us preparing for a number of those games and trying to figure out how to simulate the opponent and the environment. Taking nothing away from the outstanding teams we faced, but we always felt like we were due to get a win. I told a lot of our kids as a coach and as an Athletic Director that one game doesn't define a season, but when that game keeps you from a major goal; it's going to be tough.”

The difficulties were made particularly acute when, for years, Coquille was in 3A, which held its state championships in Coos Bay.

“They all went to watch,” Layton said. “They’d see those teams and know we could compete with those guys. They never got the chance and, to make it worse, they kept hearing about the girls.”

Coquille was 21-4 and ranked third in 2A when it hosted Grant Union in the game to get to the 2020 state tournament. There was a light show. The atmosphere was electric.

“It was like we were playing for the championship,” Layton said.

The Red Devils had to contend with GU’s Tristan Morris and struggled to stop him. But Coquille had Smith and he was not going to be stopped. The Red Devils led start to finish and played a nearly flawless game for three quarters. The fourth was a bit more of a struggle but the team always led by double digits.

In the last two minutes the smiles came out. The chatter was nonstop on the Coquille bench. The curse was about to be lifted, the proverbial monkey shrugged definitively from the team’s collective back.

“It meant a lot, especially to my seniors,” Layton said. “Coquille is a tight community; they know all the kids. The players knew the kids from years past who had great opportunities and didn’t do it. They were fighting for all of them, too. It was big.”

“For a number of years, we felt like a top 10 team in our classification, but the realization is only eight go to state,” Hampton said. “The 2020 team reaching Pendleton was big because it will change the narrative about the last weekend in February for our Boys program.”

With that mission accomplished, perhaps even bigger things are in store for the boys basketball team.

It’s been 43 years since Coquille won a state team title in any sport. The community knows about that, too.

Why not break another streak?