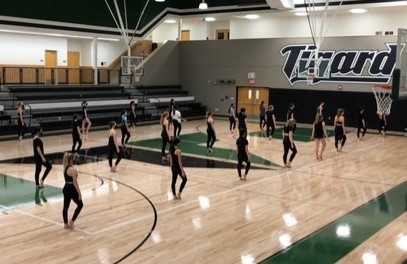 The Tigerettes, pictured at their first in-person practice, prepare for the upcoming season.

After ending their season early in 2020, dance teams will resume competition in March.

The competitive season has been condensed into seven weeks and will feature both virtual and in-person opportunities.

In a change from past years, all local competitions will be sponsored by the Dance Drill Coaches Association of Oregon (DDCA) to relieve the hosting burden from schools.

Teams will be evaluated on an Excellent, Outstanding, and Superior scale.

"Our coaches stepped up and made difficult decisions to ensure that we would be able to return to competition,” said David McCall, DDCA Board Chair. “As a whole, our coaches looked for what would benefit the most student-athletes no matter what school they represent.”

Those decisions include a simplified scoresheet; agreeing not to include stunts/lifts, tumbling beyond level 1, and kickline; a move to a ratings system; and shortening routine lengths.

The new competition format also resulted in need for additional judges. Members of the dance community responded to calls for judges with a record number of potential judges attending the adjudication training on Feb. 27.

“It was inspiring to see so many people interested in judging,” McCall said. “We will easily be able to provide three judges for each school that elects to compete in-person.”

“This season will be one for the history books. We excited for our athletes to return to competition.”