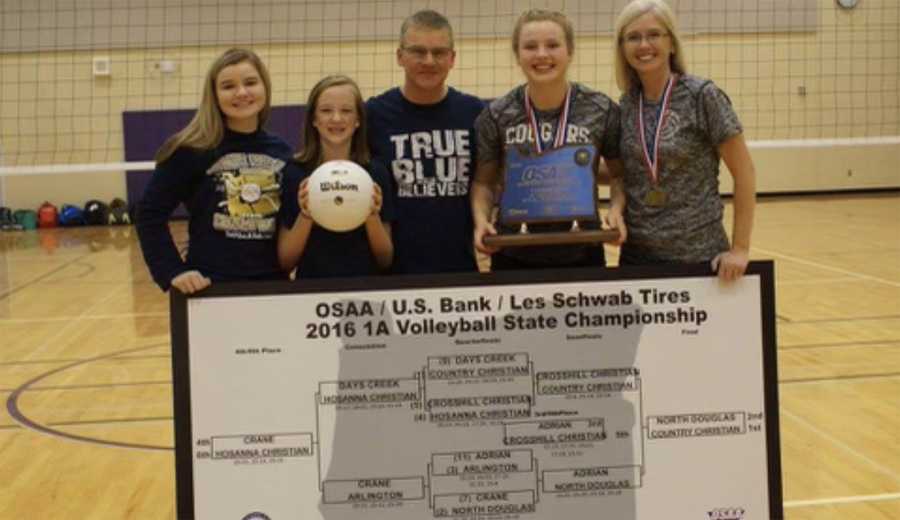 From left, Courtney, Audra, Mike McGrath, Meghan and Janin McGrath show off one of four brackets the Cougars put in their gym.

[Editor’s note: The idea behind “Alphabet Stories” is to write one noteworthy athletics-related story about each OSAA-member school. We started with Adrian HS on Sept.18. Today’s story, nearly six months later, is about Country Christian High School. The goal is to write two per week all the way to Yoncalla! While we will be relying upon athletic directors to furnish story ideas, anyone may offer suggestions by emailing johnt@osaa.org]

The year was 2013 and Country Christian School of Molalla had made the splashiest of 1A state volleyball tournament debuts by defeating top-ranked Lowell in a four-set quarterfinal. The Cougars, who’d only made it to the Round of 24 just a couple of times before then in their history, lost their next two matches, to Condon / Wheeler and Dufur, to place fifth.

For most schools, that first taste of state tournament success would have been oh so satisfying.

Not so Country Christian.

The players were resolute after the 3-1 loss to Dufur, said head coach Janin McGrath.

“We’re coming back next year and taking the bracket home,” they told her, referring to the large, rectangular white board with the completed state tournament bracket, which the champion claims.

Not only did the Cougars win state the following year, they did so again in 2015, again in 2016 and again in 2017, a quartet of titles for a school that had never before won state in any sport.

The 2014 title capped a three-year building process for McGrath, who moved from assisting with the basketball team to heading the volleyball program in 2011. McGrath, who played volleyball in high school but basketball in college, applied for the position knowing that the school’s volleyball talent level, which included her three young daughters, was about to increase. She’s been coaching them at the youth level and knew their potential.

She thought, “I wouldn’t mind seeing what I could do with this group.”

Country Christian made the state playoffs in McGrath’s first year, but was ousted by Lowell.

“We had a handful of seniors who didn’t realize that they could accomplish a lot,” McGrath said.

The 2011 team also had freshman Miranda Halverson. She would become a cornerstone player for the school and earn unanimous First Team All-Tournament recognition as a senior in 2014, when Country Christian claimed its first title.

“You don’t find a group that unselfish when loaded with that much talent,” she observed. “They had this unique factor of team first, self-reward second.”

Volleyball success did not end when the 2018 class graduated. The Cougars went 19-9 the following fall, but lost to Joseph, 18-16 in the fifth set, in the first round of the playoffs, to snap their title streak. Country Christian was 16-8 in 2019 and made the state tournament, but was eliminated from title contention in the semifinals, by Powder Valley, again in a five-set heartbreaker.

Coronavirus denied Country Christian the chance to go for a state title in 2020, something McGrath rues for a couple of reasons. First, it was to be her last at the school. An employee at the Federal Reserve Bank, she’d been transferred to Texas and was deferring the move to coach her team, which included daughter Audra, a junior, one more year. Second, she had the talent – all of her hitters, best setter and best libero – back to make another strong run at the final four.

“In 1A, talent levels come and go,” she explained. “We had the makings.”

Country Christian has started 4-1 in 2021’s “Season 2,” an abbreviated five-week sojourn without a state tournament. The Cougars will play 11 matches, including league tests against vaunted Damascus Christian and North Clackamas Christian; and perhaps a match or two in a culminating week, before McGrath turns in her whistle. Her two amazing assistants will take over this coming fall. Perhaps a former player will take the job thereafter.

McGrath said she doesn’t know whether she’ll coach volleyball in Texas, but the state-championship-winning coach plans on staying involved at Country Christian, at least for a little while.

“I may guide from afar,” she said. “I credit sports with keeping me out of trouble long ago; so I like giving back.”