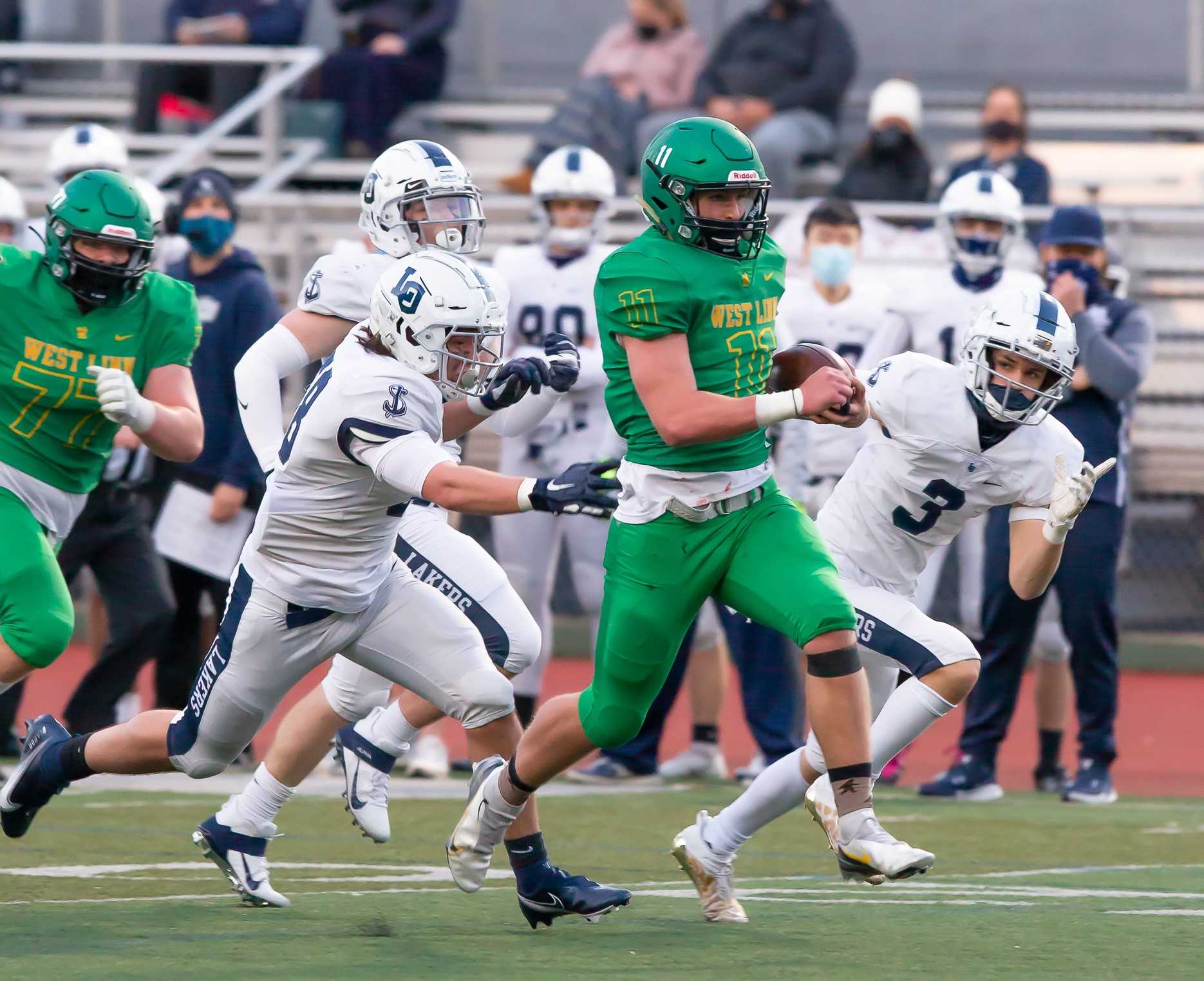 One week after taking down reigning Three Rivers League football champion Tigard, the host Lions got some payback against rival Lake Oswego with a 42-7 rout.

The Lakers had beaten West Linn the last three seasons, and the 2019 loss – in which Casey Filkins scored the game-winning touchdown as time expired – was particularly painful.

“When that happened, it was heartbreaking,” Lions senior defensive end Kaanan Huffman said.

So the senior-dominated Lions took great satisfaction in their performance Friday night, when they raced to a 21-0 lead in the first quarter and played nearly the entire fourth quarter with a running clock.

Senior quarterback Blake DeBisschop completed 17 of 23 passes for 253 yards and four touchdowns, to four different receivers, for the Lions (4-0), who had touchdown drives of 17 and 19 plays.

“To finally beat them after three years, and to put a good number like that on them, it felt great,” DeBisschop said.

The Lions have high hopes to finish off the season strong and make a claim as the state's best team. They play next week at Oregon City in the 100th Battle for the Bridge and then will seek to play a top 6A contender in Week 6.

In the team's postgame huddle, two members of the 2016 title team – Alex Forsyth and Connor Maloney – held up their championship rings, whetting the Lions' appetites.

“For sure, it's a motivator,” DeBisschop said. “That's what we've wanted since we were in middle school and elementary school. It'll be fun if we get there.”

Added Huffman: “That's the one thing I want.”

Lake Oswego (1-1), which opened its season last week with a 42-20 win over Oregon City, was overwhelmed by the talented, experienced and hungry Lions.

“They've got a scary combination, very well coached and very good players,” Lakers coach Steve Coury said. “We're just not to their caliber. I think we could've played better than we did, but that's a credit to them.

“I'll tell you what, that's a really good football team. It's one of the good teams they've had. When Tim Tawa was here, the quarterback, they were special, but this is a good group. They seem like they're really together.”

West Linn led 21-0 in the first quarter as DeBisschop threw touchdown passes of 65 yards to senior Aiden Scott and 29 yards to Huffman, sandwiched around a 17-yard scoring run by senior Gavin Haines.

The lead grew to 28-0 late in the second quarter when DeBisschop hit senior Clay Masters with an eight-yard touchdown pass to finish off a 17-play drive that consumed 8:34. Senior running back Cole Peters made the play of the drive, taking a screen pass and relentlessly weaving for 24 yards on third-and-22 from the West Linn 8.

“He's an animal,” DeBisschop said of Peters, who also ran for a score, set up a touchdown with an interception and recorded a sack. “When you give the ball to him, he's going to do something special.”

The Lions had an even longer touchdown drive in the second half, going 77 yards on 19 plays and taking 11:16 off the clock. It was filled with key conversions, including a seven-yard run by DeBisschop in which he stuck his head down and burrowed over defenders for the first down.

The execution on key plays was satisfying for West Linn coach Chris Miller.

“We've been very efficient on third and fourth down,” Miller said. “We had some good conversions tonight.”

The Lions finished off the second long drive when – on fourth-and-goal from the Lake Oswego 7 – DeBisschop rolled out to buy time and found senior tight end Mitchell Duea breaking free across the back of the end zone for a touchdown. The score made it 35-0 with 10:53 left and started the running clock.

“There's a lot of options out there,” DeBisschop said. “It was senior night, so I tried to feed all the seniors. I tried to spread the ball around, get it to guys who haven't scored this year. It felt great to give Mitchell Duea a touchdown because I've been missing him on a lot of balls this year.”

Haines rushed for 54 yards on 14 carries and Peters added 43 yards on nine carries for West Linn, which had a 391-191 edge in total yards. Lake Oswego junior quarterback Jack Layne completed 12 of 23 passes for 168 yards and one touchdown – a five-yarder to senior Garrett Roach – but was intercepted by Peters and Masters.

Given how the season was in jeopardy, Huffman said the Lions have relished the opportunity to settle some scores.

“It's a big bonus for this team,” Huffman said. “This is one game we've had circled on our calendar. Every single season, we see LO, we see Tigard, and we say, 'All right, these are the teams we want to beat.'

“They came out here last season, on our home turf, and smacked us. This year, it was an honor to come out here with my boys and show what we're about.”