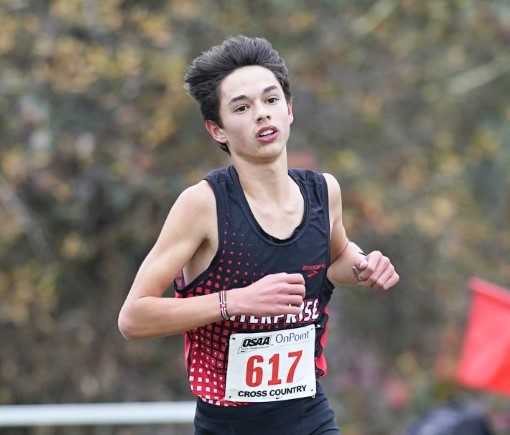 Reigning 3A boys champion Enterprise will have its full team together for the first time this season Friday when it competes in the 3A Special District 3 cross country meet at Thompson Ranch in Heppner.

The junior-dominated Outlaws have been running this season without Henry Coughlan, who won the state meet in 2019 as a sophomore. Coughlan spent much of March in Florida visiting with high school phenom Rheinhardt Harrison, who is bidding to become the youngest American to break the four-minute mile.

“Henry is very good friends with him, so he's been kind of training with him,” Enterprise coach Dan Moody said. “He's been doing more track workouts than anything, so we'll see. Henry's going to run on Friday. He's excited, he's happy to be back. We'll just see where he's at.”

Coughlan, who has been home-schooling this year, didn't train with Enterprise in the fall. He has recently returned to practiced and has been running behind junior Zac Knapp and slightly ahead of junior Bayden Menton, who were third and fourth at state in 2019, respectively.

“I think the type of training Henry's been doing has definitely hurt him a little bit,” Moody said. “He's such a competitor, so I wouldn't be surprised what happens Friday. I look for him to have a great meet.”

Moody, who has coached the team since 1989, has altered his approach to fit the shortened schedule this season.

“I told our kids that we can't take any time off, so I pushed them pretty hard through spring break,” Moody said. “We're pushing 12 weeks into a six-week season. So far we've been pretty good about not having major injuries. We're pretty fortunate.”

The Outlaws were hoping to get a good test at district against rival Burns, which beat them by two points for the state title in 2018 and finished second to them by three points in 2019.

But the Hilanders will not make the trip to Heppner for the meet, which originally was scheduled to be hosted by Grant Union but was moved when Grant County's risk level went from low to moderate.

“I'm disappointed about it,” Moody said.

Knapp and Menton have been a solid one-two for Enterprise this season, recording bests of 15:56.1 and 16:38.8, respectively. In 3A, their times rank behind only Cascade Christian junior Jake Sorani (15:22.4).

The Outlaws have been motivated by the prospect of competing in the season-ending 3A meet April 10 at Cheadle Lake Park in Lebanon. It's not an official state championship, but the meet will provide an opportunity to gauge 3A supremacy.

“They're so excited about this meet,” Moody said. “We've got posters plastered all over the county here.”

Moody said that three consecutive state titles has been a goal for Enterprise ever since coming up short in 2018. The coach said it is the best team he has ever had.

“I think their freshman year, if they would've won it, it might have been a little bit tough to motivate them,” Moody said. “But they were hungry. Gosh, they were hungry that second year. You just couldn't believe it. Kids like that make a coaching job so easy.”

“I can't say enough about him,” Moody said. “It is set up. I tell you, this race is something. It's going to be a fantastic meet.”

South Medford junior Michael Maiorano recorded the best time in the state this season when he clocked 14:37.65 at the Crater Classic on March 26.

It was a personal best by nearly 37 seconds for Maiorano, who as a sophomore ran 15:13.8 and finished fourth in the Southwest Conference and 23rd in the 6A meet.

"I felt like he had the potential to do this," South Medford coach Josh Wallace said. "I think he's just at the beginning."

"I think he was excited about the chance to race them again and hopefully turn the tables a little bit," Wallace said. "Michael was feeling great. He looked really strong the whole race."

Wilson junior Charlotte Richman has had an impressive season.

Richman won four of the five Portland Interscholastic League meets and finished first out of 41 runners in the Putnam COVID Classic on March 27.

She will race in the PIL district meet Saturday at Pier Park.