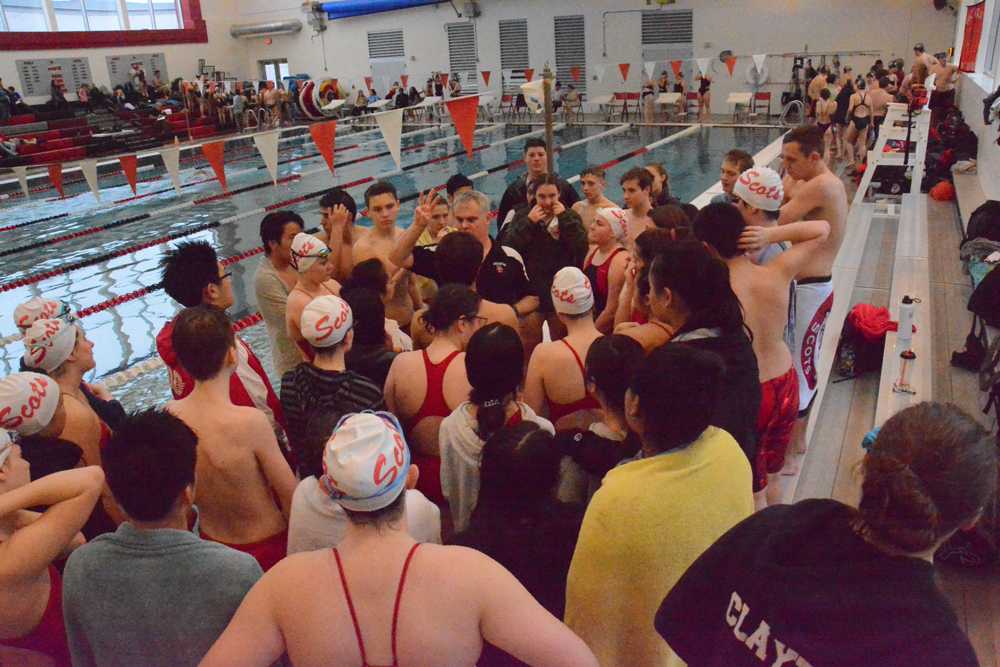 [Editor’s note: The idea behind “Alphabet Stories” is to write one noteworthy athletics-related story about each OSAA-member school. We started with Adrian HS on Sept.18. Today’s story, almost eight months later, is about David Douglas High School. The goal is to write two per week all the way to Yoncalla! While we will be relying upon athletic directors to furnish story ideas, anyone may offer suggestions by emailing johnt@osaa.org]

So, when it came time to build a new pool to replace the existing six-lane, 50-year-old facility, the community responded by easily passing the bond measure to ensure its construction. The heyday of swimming at David Douglas may be in the rear view mirror, but its roots are deep, even as the community’s demographics have changed.

Jim Bowe, David Douglas’ swim coach, helped oversee the building of the new, eight-lane facility, which opened in the summer of 2014. Bowe came to the school in 2008 and led the David Douglas boys team to its last state title. The girls team finished second one year later.

Bowe wants to develop champion swimmers at David Douglas and says the eight-lane pool can do just that, because two of the lanes can be designated for those training to be elite. But he recognizes that swimming at David Douglas is about more than breaking personal records and earning medals.

“We have a lot of kids who get involved at a young age and they stick with it,” Bowe said. “They see this as an opportunity to be involved in something in high school. At this point, we’re getting kids to love swimming and hoping that we can get kids to that championship level.”

The pool may be run by the school district, but make no mistake: the David Douglas aquatic facility is a community pool. The Scot swimming and water polo teams use it, but there also are summer swim lessons, a swim program for fourth and fifth graders, aquatic fitness classes at the high school level, recreational swimming and club swimming.

“Every part of our program is intertwined,” Bowe said. “Swimming is a life skill and David Douglas is a water safety school.”

The elementary-age swim program introduces the sport at an early age, which may explain why David Douglas’ swim program routinely has twice the participation of other 6A programs.

The new pool has helped, too. Bowe admitted that it gave swimming a new lifeline at the school, brought many more kids back to the water and helped the school become competitive again against the likes of Jesuit and Sunset, which have dominated 6A swimming for the past decade.

“We were turning a corner before Covid hit,” Bowe said. “We were getting to that next level. If Covid didn’t hit, we would have been knocking at the doors of the Jesuits.”

Swimming is not for everyone, Bowe admits.

“A lot of our athletes look at the bottom of the pool for three hours a day,” he said. “It’s a different mentality.”

The sport teaches discipline, encourages hard work and is a boon to the self-motivated.

“I respect how much effort it takes to be good without the accolades,” Bowe said. “We don’t get hundreds to watch or the same excitement when you win districts, like it is in other sports like football or basketball. It takes inner motivation rather than coming from the outside; it’s the kid who doesn’t mind grinding without a pat on the back every time.”

Last year, two David Douglas grads went on to swim in college. Next year, that number will double. The program is slowly building back to championship caliber, while also instilling traits that will help team members in all phases of life.