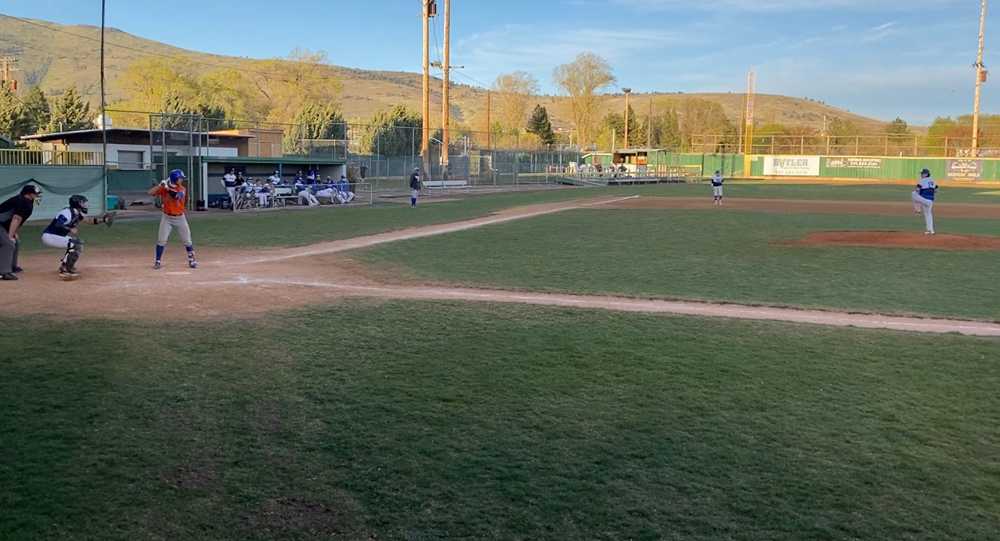 HIdden Valley's Nate Vidlak (at bat) had 5 hits in Game 1 of Monday's doubleheader, then hurled a complete game in the nightcap

The Hidden Valley Mustangs, recently named No. 1 by the 4A Championship Week Committee, lived up to its ranking on Monday by twice downing the No. 7 Mazama Vikings, 24-1 and 9-1, in baseball doubleheader action in Klamath Falls.

“We just played really well today,” head coach Mark Vidlak said. “I’m proud of our boys and how they competed. They showed leadership and were focused. It was really good to see them play so well.”

For the second time in a week, Hidden Valley (9-0) made the 100-mile journey from Grants Pass east to the Klamath Falls, passing by rocky crags and high mountains, which turned into big meadows and one of the most beautiful lakes in the state. It’s a way of life for athletes in the Skyline Conference, which combines schools from the Rogue/Applegate Valley and Klamath Basin.

If Hidden Valley’s players were weary from the 2.5-hour drive, they did not show it. The Mustangs struck for 13 runs in the second inning of the 3 p.m. opener on their way to the convincing win. Six players – LG Matusik, Ethan Elzy, Daniel Iwamizu, Noah Stone, Isaac Hill and Nate Vidlak – drove in runs in that frame, which included four extra-base hits.

Vidlak, one of eight juniors on a roster of 14, led the way at the plate with five hits in the game, including three doubles. Hill, a fellow junior and Oregon State recruit, struck out 10 in 3.2 innings on the bump.

The second game of the doubleheader was much closer. Hidden Valley broke it open with five runs in the fifth inning, highlighted by a home run from catcher Matt Iwamizu, one of only four seniors on the squad. Iwazimu finished the game with three hits. Junior Caleb Richter added two in support of Vidlak, who went the distance on the mound, allowing four hits while fanning 10.

The two losses dropped Mazama’s record to 6-3 on the season. The Vikings have lost only to Hidden Valley in their second stint under head coach Pete Whisler, who first coached Mazama in the 1990s, compiling a 113-17 record over five years, including a 4A state title in 1996.  Whisler, who since has coached collegiately, at other area high schools and in American Legion ball for the Klamath Falls Falcons, said before the games that his team would need to throw strikes, play good defense and find a way to put the ball in play against Hidden Valley’s outstanding hurlers in order to be competitive. The effort was there, even if the scoreboard did not reflect it.

“They have a good team,” Coach Vidlak said. “We just played hard and good today. We have two very good pitchers and the kids around them have played around 500 games together since the age of 8.”

Hidden Valley, which has a three-game lead in the conference standings, has essentially clinched a berth in the culminating week playoffs two series left, versus Phoenix and North Valley. Vidlak said that while it might make other teams complacent, his players are always motivated to play well and win.

“They understand what we’re trying to accomplish,” he said. “Those are great wins and we will enjoy them on the long bus ride home. After that, we have to move on to get ready for Wednesday to peak for the playoffs.”