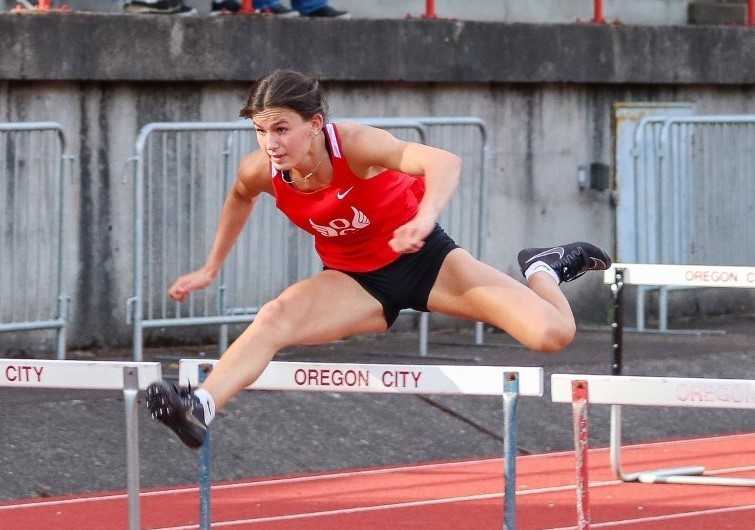 Oregon City's Harley Daniel is among the top five in the state all-time in both hurdles races. (Photo by Tamara Peyton)

For much of this track season, the only footsteps Harley Daniel has heard are her own.

But even though no other hurdler has been able to push her, it hasn't kept the Oregon City junior from going faster.

“She's been racing by herself all season,” Pioneers coach Kristin Mull said. “Sometimes you struggle with that. Oddly enough, she's just so focused on what she's doing. She's kind of oblivious to everyone around her.”

The latest example came Wednesday during prelims for the Three Rivers League district meet at Canby. Daniel clocked a blistering 14.19 seconds in the 100-meter hurdles and 43.32 in the 300 hurdles, breaking school records in both events. The previous marks were 14.41 (Michelle Reynolds, 1989) and 43.98 (Roseann Kassebaum, 2001).

But Daniel is more than a hurdler.

She has long-jumped 18 feet, 8 inches, second in the state only to sophomore teammate Sophia Beckmon (19-5 ½). The pair hold the top two spots on Oregon City's all-time list.

Daniel is leading the state, for all classifications, by 1.15 seconds in the 100 hurdles and 2.4 seconds in the 300 hurdles. Wednesday, she won each each race by 2.3 and 5.3 seconds, respectively.

She has improved by nearly one second in the high hurdles from her freshman year, when she ran 15.13 and made the finals at the 6A championships but was DQ'd.

“It's the maturity and paying attention to details,” Mull said. “She really has fine-tuned things. She utilizes every bit of power that she has. A lot of them, it takes a while to figure that out. I think she's figured out how to utilize her ability and not leave anything out.”

Daniel did not run the 300 hurdles as a freshman but planned to do it as a sophomore before the season was canceled.

Daniel still has much room to improve in the long jump. As a freshman, she jumped 18-4 in the district meet and placed eighth at state. She hit a personal-best 18-9 ¾ in a club meet March 27.

Next up for Daniel is the district finals Saturday at Canby. She will get a bigger test in the Oregon 6A Track and Field Showcase meet at Oregon City on May 21 and 22. Mull said that 44 schools have committed to participate in the meet, four have declined and three are pending.

Crusaders coach Tom Rothenberger said it was just a matter of time before Foerster started getting results for the extra work she has done since deciding to give up soccer in the fall of 2019.

“All of her work is finally getting an opportunity to show,” Rothenberger said. “Now she's 18 months into that. She took all the talent she had, and took all the work ethic and the time from club soccer, and she just poured it into training.”

Rothenberger said the difference in Foerster is visible.

“People who remember seeing her two years ago at the state meet, she's just a completely different athlete,” Rothenberger said. “You look at her and you go, 'Well, that looks like a runner from the University of Oregon.'

“I've been fortunate to coach a lot of talented runners, but without a doubt she's the most talented female distance runner I've ever coached in 40 years.”

Foerster clocked 4:26.06 in the 1,500 against Beaverton on Wednesday despite battling a steady wind.

“On a non-windy day, she's got another three or four seconds in the 1,500,” Rothenberger said.

Foerster will next race in a Metro League meet at Mountainside on May 19. She also plans to compete in the 6A Showcase at Oregon City on May 21 and 22, but has yet to decide her events.

Lake Oswego is dominating the pole vault this season.

The Lakers not only feature the top two boys on the state's best list in seniors Aaron Olson (16-0) and Harrison Canfield (15-6), but they have the No. 3 girl in junior Katelyn Howard (11-9).

Olson and Canfield surpassed the school record as sophomores when they cleared 14-6 and 14-0, respectively. In the 6A meet, Olson was fourth and Canfield was seventh.

The 6-foot-1 Olson and 6-3 Canfield, who attended a camp together in Arizona before the season, have consistently performed. Olson opened the season by clearing 15-9 and has been over at least 15-6 in five of six meets. Canfield started with 14-6 and has not dropped below that mark in seven meets.

In the Three Rivers League district meet Wednesday at Canby, Olson (15-6) and Canfield (15-0) held down the top two spots. Both are scheduled to finish their season in the Oregon 6A Track and Field Showcase on May 21 and 22.

“They've been doing awesome,” coach Vince Kinney said. “They trained through the offseason pretty hard. They've been getting in the weight room. They're just stronger and faster. It makes a big difference. They're a lot more technical. They're getting more vertical than they have been.”

Olson plans to continue competing in college and is considering Eastern Washington and Southern Oregon, according to Kinney. Canfield has committed to compete at Oregon.

Howard has made dramatic gains from her freshman year, when she cleared 7-0. She hit 10-6 last summer and has reached at least 11-0 in all seven of her meets this season.

Notes: Lake Oswego freshman Mia Brahe-Pedersen ran the 200 in a personal-best 23.70 in the Three Rivers district meet Wednesday, moving up to No. 3 all-time in the state behind Churchill's Margaret Bailes-Johnson (22.95, 1968) and Summit's Kellie Schueler (23.69, 2009). Brahe-Pedersen's previous best was 24.09. … Jesuit's Rothenberger is working with the Portland Track Festival to host two events for high school distance runners in two weeks. The first meet, May 29, will feature the state's top 800 and 1,500 runners, from all levels. “That field is coming together really well,” Rothenberger said. “The best kids in the state are going to be there.” The other event – the Stumptown Twilight on June 3 -- will have a 3,200 race with the top 12 runners from Oregon and top 12 from Washington. “There may be 10 guys that go under nine minutes for 3,200,” Rothenberger said. … Sweet Home senior Tristan Calkins, the 4A runner-up in the high jump in 2019, posted a state-best mark Friday when he went 22-5 ½ in the Oregon West Conference meet. It was the first time this season that he broke his personal best of two years ago of 22-3. … Sutherlin senior Jadyn Vermilion triple-jumped a state-best 38-0 ½ on Wednesday, breaking her personal record by 16 inches. Vermilion was the 3A runner-up as a sophomore.