Swimming: Powerhouse Jesuit adjusts to all-virtual Metro
Tweet
The Crusaders, who have yet to face an opponent in person in the Metro League, are 'happy just being in the water'
June 3, 2021 by Jerry Ulmer, OSAAtoday 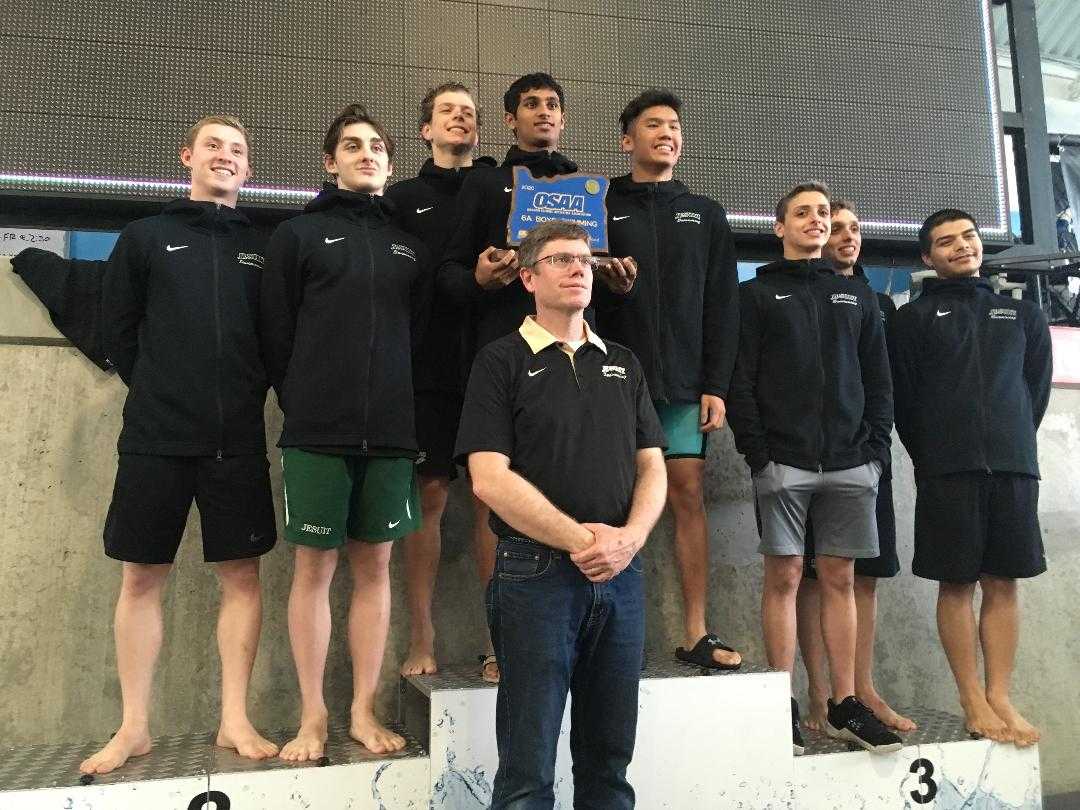 With its 6A champion boys and girls teams returning mostly intact, Jesuit was primed to take on all comers in the 2021 swimming season.

As it has turned out, halfway through the six-week season, the Crusaders have yet to see an opponent face to face.

The Metro League is conducting its dual-meet schedule virtually. Jesuit swimmers compete against one another and the times are uploaded to a third party, which combines them with the opponent's results to score the meet.

Coach Bryan Butcher said that given the circumstances of the season, the Crusaders are “happy just being in the water.”

“Really our mindset was just to get them together and get them swimming, just for the mental aspect of it,” Butcher said. “The kids that are swimming are enjoying it. It's hard from a coaching point of view because I'm still very competitive, but I'm virtual.”

Metro teams opted for virtual meets to start the season because state guidance capped the capacity of their swim facilities at 47. When guidance changed after one week and allowed for 50 percent of regular capacity, it was enough to stage dual meets like other districts across the state, but the Metro stuck with its original plan.

“The other teams like having virtual meets,” Butcher said. “It's safer and you're not worried about being outside your bubble.”

Practices have presented a challenge, too. At the start of the season, Jesuit could have only one swimmer per lane. That guidance changed, though, to allow four per lane, or 24 for the entire pool.

To accommodate about 56 swimmers at practices, Jesuit has rotated in one-hour shifts of 16. Some swimmers practice twice a week, with others working out up to four times.

“That part has been challenging, but it's working,” Butcher said. “Kids are swimming. They get to swim.”

Pool availability also has complicated matters in the Metro, where all teams use outside facilities. Jesuit lost one of its options – a Portland Parks and Recreation facility – and relies on pools at the Mittleman Jewish Community Center and Tualatin Hills Park and Recreation District.

“If Jesuit had a pool that we own, that we run, then we would've done an invitational or something where other teams could come,” Butcher said. “But nobody owns their own pool in the Metro, so you're at the mercy of THPRD or whatever pool you swim at.”

Butcher said that other coaches have contacted him and Sunset coach Adam Farber about organizing a statewide invitational with top swimmers, but the idea never got off the ground.

“We don't have the time to plan it. We're all teachers,” Butcher said. “Just putting it together, and getting a pool, it's really difficult. There were some teams reaching out to us, but it really needed to be someone who has their own facility that could do it. None of us have a facility that we have control over.”

Rather than a district meet, the Metro is planning an all-senior meet for the final week of the season. The competition will be in-person, but participation could be limited considering that many seniors will have graduated and others are competing for clubs.

After winning its sixth consecutive 6A title in 2020, Jesuit's boys team looked to be unstoppable this season.

Simons has won two state titles in the 100 backstroke and one in the 100 butterfly. The Colorado-bound Marco Nosack is a two-time state champion in the 100 breaststroke. Kreutzer won the 50 freestyle at state last year.

“We were looking forward to it,” Butcher said.

Diego Nosack has qualified for the Olympic Trials in the 200 individual medley. Simons, owner of the school record in the 100 backstroke, has moved to Las Vegas, where he is able to train at a pool with fewer restrictions.

“His mindset was the Olympic Trials,” Butcher said of Simons. “It's been difficult to swim in Oregon this year because of the rules. If you're a swimmer and you live in Oregon, it's been tough.”