Girls basketball: Tualatin zone puts foes in tight squeeze
Tweet
With 6-3 Natalie Lathrop patrolling the middle of the 2-3 zone, the Timberwolves are holding opponents to 26.9 points per game
June 19, 2021 by Jerry Ulmer, OSAAtoday 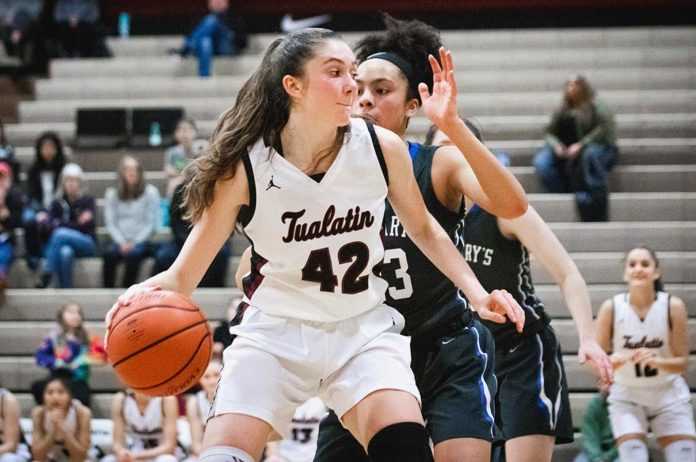 In his two decades of coaching girls basketball in Oregon – as an assistant and a head coach – Wes Pappas has carved out a reputation as a zone defense guru.

But of all of his teams that have led the state in scoring defense, his Tualatin team this season might be the best yet.

With 6-foot-3 senior Natalie Lathrop anchoring the middle of the 2-3 zone, the Timberwolves (12-1, 11-1 Three Rivers League) are holding opponents to a 6A-low 26.9 points per game. They have cranked it up a notch from when Pappas took over as coach last season and they allowed 38.3 points per game.

“Part of it is they're better in Year 2, and part of it is we've just got length and kids that can play,” Pappas said. “I don't know if we're technically as good as some of the teams I've coached before, but the athletic ability and the length is kind of unprecedented for any team I've been around.”

Pappas was the architect behind the dominant Tigard defenses as an assistant to coach Steve Naylor for six seasons. He had the same type of defensive success as Sherwood's head coach for four seasons (2015-19).

“I've had 12 classes that have run this,” Pappas said. “It takes two years to get really good at it. I was really impressed with the basketball IQ of these girls and how quickly they picked it up last year, but I knew that was only scratching the surface, because it takes two years.”

The Nevada-bound Lathrop, who leads the team in scoring (13.8) and rebounding (10.4), is an intimidating presence in the paint, averaging 3.3 blocked shots per game.

“I think we do a better job of anybody around of funneling into a shot-blocker,” Pappas said.

Tualatin's only setback is a 52-48 loss at Lakeridge in a Three Rivers game June 5. The hot-shooting Pacers, led by junior Reese Ericson and sophomore Keelie O'Hollaren, built a 17-point lead in the first half. They finished with 10 three-pointers.

“They had a great game. They're really good players, super-skilled players,” Pappas said. “They were able to get open looks. It was a Saturday, and we didn't come out ready to play and they jumped on us.”

Tualatin's biggest win came Wednesday when it went on the road to beat reigning Three Rivers champion West Linn 54-36, although the Lions (10-3, 10-1) were without Arizona-bound post Aaronette Vonleh (30.1 points per game), who sat out with a tender ankle.

The Timberwolves faced West Linn and Lakeridge (10-2, 10-2) only one time each, so bragging rights in the Three Rivers come with an asterisk this season.

“It's kind of unfortunate a little bit on the schedule,” Pappas said.

When Pappas took over as Tualatin's coach, the team was coming off a 9-16 season and had graduated four starters. They went 19-7 last season, losing in the 6A playoff round of 16, and took another big step this year.

“They just really bought into what we're doing,” Pappas said. “They had all the talent and skill in the world, they just didn't realize it. We just came in and gave them the confidence, something that just clicked with them. That's why this has been my favorite two years in my 19 years of coaching.”

The Timberwolves will get a chance to prove themselves this week when they play in the power-packed Maroon bracket of the Portland-area culminating week tournament at Grant High School.