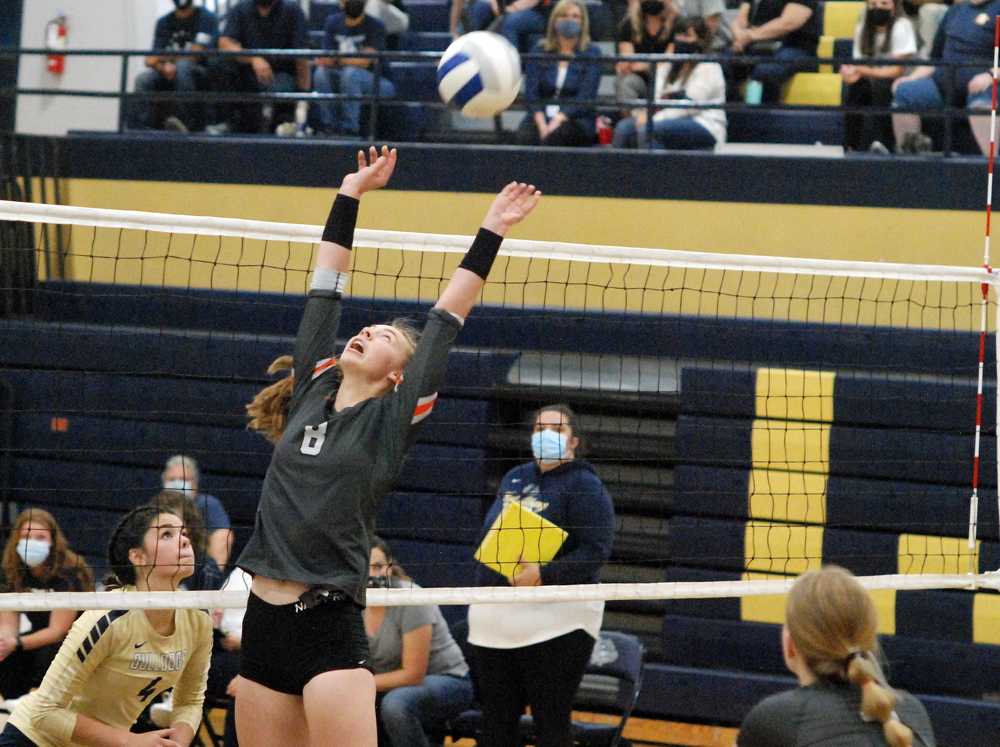 OH Hailey Heider had 19 kills, including the last two, to seal the Mid-Willamette Conference win. The 5-11 senior also was instrumental in West Albany rallies to erase deficits in the first two sets.

“They’re such a special group of girls,” Bulldog coach Megan Wallace said about her team. “When they come together and have fun, they do a great job.”

West Albany finished fifth at state in 2019 and went 10-1 during the COVID-shortened season last spring. The Bulldogs haven’t placed better than third since winning 5A back-to-back in 2012 and 2013, but with eight seniors on the roster, this could be their year.

“They are all highly motivated by a chance at a postseason run,” Wallace said.

If Tuesday’s match is any indication, Silverton could be a chief contender for the title as well. The Foxes have never before played for a title and were 6-14 as late as 2019, but this is a talented, junior-led group on the verge of a breakthrough after going 8-5 with the same core group in the spring.

“We are young but competitive and experienced,” Silverton coach Kate O’Connor said. “We’re right there. We’re so close.”

Close indeed. For vast stretches of the first two sets, Silverton looked like the better team. The Foxes served ace after ace, thanks to rockets from Rowan Reilly and Olivia Rosborough; passed well in a back row anchored by libero Lilly Horner; and got phenomenal play from superb sophomore S/OH Alexis Haury, who has to be one of the best players in the state. Haury displays a deft setting touch, great hustle and an advanced sense of the game. She’s simply mesmerizing to watch.

The hitting and serving of Reilly helped Silverton move to a 10-7 lead early in the first set. The Foxes took advantage of West Albany errors to extend the advantage to four, 19-15, forcing the Bulldogs into a timeout.

Whatever Wallace said during the break worked, because West Albany scored five of the next six points, keyed by the setting of athletic senior Sydney Harrington and the hitting of outsides Heider, who had nine kills in the set; and sophomore Kendyl Arnett. A great dig from senior libero Maddy Hellem led to a kill by Tessa Zimmerman, which tied the set at 20-20, the first time West Albany didn’t trail since the teams were knotted at seven apiece.

Silverton hung in, however, and thrice took one-point leads, as Leah Twede scored twice and Reilly, a 6-0 athlete with a blazing arm, tooled the block. Each time, West Albany responded. Tied at 23-23, Brooke Rogers’ second kill in succession gave the Bulldogs a 24-23 lead. The game went into extra points after a Reilly kill tied matters at 24. West Albany used a terrific Arnett tip to take the lead for good and won, 27-25, on a Silverton hitting error.

Two more Heider kills, one from each pin, helped stake West Albany to a 6-3 Game 2 advantage. Successive Reilly aces following a Bulldog service error helped Silverton get back into the set and the Foxes eventually took an imposing lead, 14-10, thanks to three straight Rosborough spaders.

A great pass from Hellem – she was everywhere in the back row – helped West Albany avoid yielding four aces in a row. Harrington finished with a setter dump to break the run. It prompted the Bulldogs to go on a run of their own. Two kills from impressive sophomore Arnett knotted matters at 16-16. Haury passed and rolled to put Silverton back on top by one, but West Albany went on a 6-3 run to take command, 22-20. A Gracie Boeder kill started the run, which was aided by two Rogers kills.

Silverton did not back down. Great hustle and heart from Haury -- the kind that makes you notice – and a solo stuff from Lindsey Schmidt tied the stanza at 23-all. The Foxes would get no closer, however. Two hitting errors – there might have been a touch on the first that went uncalled – ended the set and put West Albany in command.

Both teams appeared tired to start the third set after two intense games. Errors gave Silverton a 5-2 lead. Errors helped West Albany back into the set. Boeder’s single shingle gave the Bulldogs the lead for good at 6-5 and outsides Heider and Arnett took over from there. The lead grew to as many as five, 14-9, on a Heider blast that underscored her ability to play at the next level. Heider also was tremendous passing serve.

“She’s so special,” Wallace said. “She has worked so hard. She has a great volleyball I.Q., sees the game and has a power swing. She has a couple of offers now and is considering her options.”

Silverton rallied to within 15-13 on a Schmidt block (I had the score 15-14), but Harrington fed Rogers on a quick to restore West Albany’s comfortable lead and the Bulldogs pulled away from there. Heider destroyed a set, which caused the large but largely quiet crowd to let out an audible gasp, giving the home team match point. She completed the sweep with another impressive swing one point later.

“Our serve-receive was good tonight but we had a lot of serving errors and hitting errors,” O’Connor said.

O’Connor was upbeat after the match despite the loss. She said the team got shut down by COVID right after tryouts and had only had a few practices before season began. And yet, Silverton played better against West Albany than at any other time during her tenure. In 2019, the Foxes lost at West Albany, 25-9, 25-10, 25-9. In the spring, the set scores were 25-23, 25-14, 25-15.

Silverton stands to get better in the next couple of weeks. Senior Paige Candee, a S/RS, is slated to return from an ACL tear, which would allow the Foxes to run a true 6-2 offense.

Could Silverton be a state contender?

“After seeing tonight I feel like we could be,” O’Connor said. “We just have to work hard one day at a time, one game at a time and keep it in perspective.”

For West Albany, there are two key things moving forward.

First, the Bulldogs have to fine tune the new offense they are running this year. That means working on pushing passes up to Harrington and having the senior setter connect better with her terminal pin hitters.

Second, they have to have fun. The senior-filled team is so driven and so focused, but it cannot forget that volleyball is supposed to be about having fun.

Wallace said if the team focuses on the fun, the winning will take care of itself.