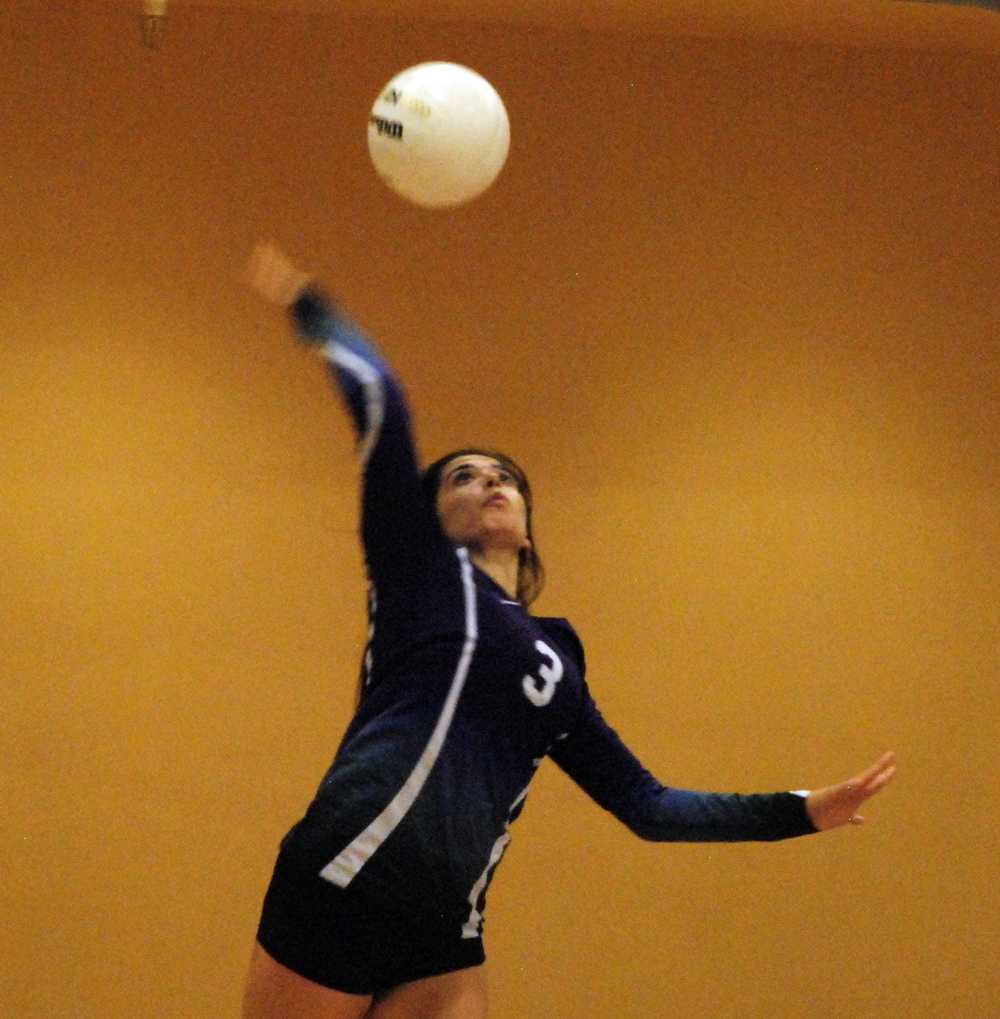 Horizon Christian's Sammie McDonald fires a serve at the OES back row. Horizon held a 15-5 ace advantage in Tuesday's match

Horizon Christian of Tualatin served 15 aces, including four each from Alexis Sumner, Ellie McDonald and Nyla Karnes, to outlast scrappy Oregon Episcopal School, 25-17, 25-27, 25-23, 25-14, in 3A Lewis & Clark League action on Tuesday at Horizon. The Hawks improved to 7-2 overall, and 5-0 in league play, in advance of Thursday’s match with Catlin Gabel, which also is undefeated in league.

Horizon Christian was the taller team and the more athletic one on Tuesday, but the Hawks were tested by a young and undersized OES squad that takes pride in being pesky. Paced by Cayton Smith and Yasmine Iyer, the Aardvarks (8-2) extended rallies by getting touches at the net and picking everything up in the back row. They frustrated Horizon into mistakes that made the match much closer than it probably should have been.

“It was a great battle, especially since we’re so young and small,” noted first-year head coach Nikole Weir. “They battled really, really hard. I’m super proud of them. They dug lights out on defense. We’re working on all-out defense because we don’t quite have the height up there.”

Sumner, Horizon Christian’s junior libero, opened the match with an ace serve. Kills from sophomore MB Sadie Eisert and junior OH Reagan Anderson extended the Hawk lead to 3-1 in this battle of senior-less squads. OES scored 11 of the next 16 points, capped by Iyer’s ace, to pull ahead, 12-8. The Varks benefited from eight Horizon errors, including three missed serves, during the run.

“It was tough in the beginning for us because we were missing a lot of serves,” noted Horizon Christian head coach Jay Lazaro. “It was difficult to get things going again and then, when we did, OES would rally. They are a scrappy team and read very well where we were hitting. We needed to make sure we were hitting a lot harder and smarter and going to the open court more often than not.”

Anderson, who has the best arm on Horizon’s team, went off speed to halt OES’ rally and start one for her team. The run, capped by successive Sumner aces, lasted eight points and turned the set around. Leading 16-12, Horizon never allowed OES to get closer than three again. Using multiple kills from Eisert and Ellie McDonald down the home stretch, as well as strong setting and good hitting from Sammie McDonald, the Hawks used the last of five aces in the set, this one from Eisert, to clinch the 25-17 win.

Sumner’s fourth ace of the match helped stake Horizon Christian to an early lead in Game 2 and three consecutive Ellie McDonald spaders made the lead 11-8 Hawks midway through, but this set would eventually belong to Smith and OES. Smith, a junior who plays in the middle at the net and middle back on defense, was EVERYWHERE and did EVERYTHING for the Aardvarks. She hit front row and back, was a formidable blocker, was steady passing serve and a stalwart defensively. It’s hard to believe there was only one No. 3 on OES’ side of the court, because she was constantly around the ball (and on it!).

Tied at 23-23, Smith passed Sumner’s tough net skimmer, which led to Athena Hsu-Chen’s kill for set point. Anderson saved that one with a big swing for Horizon and she saved the next one, too, with a sweet cut shot, but OES kept the pressure on and converted its third opportunity on Horizon’s 16th error of the set to win, 27-25, and even the match at one set apiece.

OES kept its momentum to start the third set. The Varks rolled to a 5-1 lead, including a spectacular point in which Smith, Iyer and setter Maeve Lamb all made terrific digs to prolong a rally that Smith eventually finished with a roll shot. Horizon rallied to tie the set at 7-7 on a Sammie McDonald kill and the teams went back and forth from there. Horizon led, 12-11, on an Eisert kill. OES led, 17-13, thanks to a Smith tip at 15-13 that ended the point of the night, one in which both teams sold out defensively to keep the ball in play. Horizon led, 18-17, after a 5-0 run that included an Anderson ace and kills from Karnes, Eisert and Ellie McDonald. OES led, 20-19, when Kaleia Tashima, dug a ball over the net that fell for a point. It was wild, crazy stuff!

Tied at 21-all, Anderson scored out of the back row and Emilie Miller won a joust at the net to put Horizon Christian on the verge of the set. Anderson followed with another kill to give the Hawks three set points. Elena Johnson scored off the block for OES as part of a two-point run that got the Aardvarks within one point of sending the set to overtime, but Miller, from the right side, sent a hard-driven ball down the line that found pay dirt and gave the home team that 2-1 set advantage.

Lamb’s short serve ace got OES started in Game 4. The Aardvarks led, 8-6, hoping to force a deciding fifth set, when Karnes scored on a roll shot and then went back to serve.

She served 13 straight points, including four aces, to put the game and match away. Karnes, who was listed as a setter and defensive specialist on last year’s roster, struggled playing outside in the match until this magical run.

“There is trust between the coaches and players,” Lazaro said. “They know I trust them and I’ll put the game in their hands. That’s what I told Nylah. ‘You’re here for a reason. I trust you. Take charge.’ She did well.”

With Horizon leading, 20-8, OES coach Weir implored her team to visualize coming back, telling the players that they’d rallied from larger deficits before. The Aardvarks outscored Horizon, 7-5, the rest of the way, but it wasn’t nearly enough. The Hawks got kills from Anderson, Ellie McDonald and Miller in the homestretch to complete the 25-14 set win and clinch the match, three sets to one.

“This is probably the best team they’ve had the past four years since I’ve been in the league,” Lazaro said. “I give them props. They’re doing great. They’re new coach has been fantastic and getting them where they need to be.”