Football: Cascade seeks redemption at Marist Catholic
Tweet
No. 4 Cougars look to make up for spring loss to No. 3 Spartans in battle of 4A unbeatens; LO-Tualatin highlights 6A schedule
October 6, 2021 by Jerry Ulmer, OSAAtoday 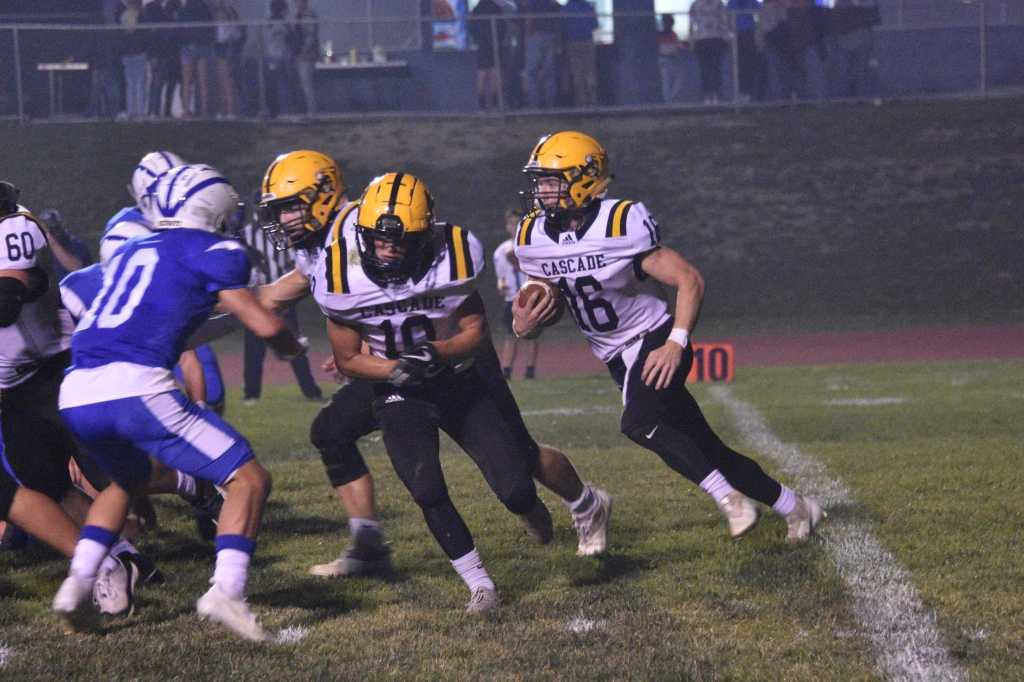 Cascade entered the 2021 football season ready to settle some scores.

“That's kind of how we planned this schedule two years ago,” Cascade coach Brandon Bennett said. “I knew this team had every piece that we needed to do what we're doing right now.”

The next stop for Cascade's redemption tour is Friday at Marist Catholic, a team that beat the Cougars 35-21 in the spring. For No. 4 Cascade (5-0), the nonleague game against the No. 3 Spartans (5-0) will be a benchmark.

“We made a ton of mistakes last time, and Marist capitalized on them,” Bennett said. “I think this is the perfect time to play Marist and get a really good gauge before we finish out our league.”

In that spring game, Marist Catholic built a 35-7 lead before holding off the Cougars. For the Spartans, the late letdown left them with somewhat of a hollow feeling.

“It was a great lesson for us about letting a team back into it,” Marist Catholic coach Frank Geske said. “We started playing some of the dumbest ball you've ever seen on the planet. To their credit, they didn't quit. I'm sure all of their guys from last year remember that, and I'm sure they're fired up to play us.”

Bennett scrapped the team's I-formation power running game for the pistol wing-T in 2019 because the program was trending with smaller linemen, but now the Cougars have some bigger guys in sophomore tackle Teagen Allen (6-3, 300), senior guard Braxton Tucker (6-1, 240) junior tackle Cole Records (6-3, 260).

“We have some really good, tough kids up front, and they're firing off the ball, playing good hard-nosed football,” Bennett said. “With our scheme, with the misdirection, that kind of allows the holes to be bigger than they probably should be. And our skill kids, if you give them a crease, they're going to be gone.”

Geske knows his defense must be stout in the trenches.

“They're a throwback running team,” Geske said of Cascade. “Their guys run hard. They do some very interesting things on offense that people don't see much anymore. It takes a while to adjust. The same thing will probably happen to us Friday night because it's hard for a scout team to orchestrate the same kind of efficiency that those guys play with.”

Hage has the arm to make defenses pay, but has yet to be unleashed due to Cascade's dominant running game.

“Their quarterback is the X-factor,” Geske said of Hage, who has four touchdown passes. “He's better than what everybody thinks.”

In comparison, Marist Catholic has been more balanced on offense, averaging 240.6 rushing yards and 141.0 passing yards per game. Senior running back Lucas Tuski (6-0, 195) has rushed for 561 yards and 10 touchdowns, averaging 14.4 yards per carry. Senior quarterback Carter Greene has completed 36 of 50 passes for 675 yards and 12 touchdowns without an interception.

In 22 varsity games spanning three seasons, Tuski has rushed for 2,480 yards and 45 touchdowns.

“I haven't had anybody that is as complete as what he is,” Geske said. “It's hard not to speak superlatives about him. He does everything. He's a wonderful running back and the best pass-protecting back I've ever had. He's a pretty doggone good outside linebacker and return guy. He never steps off the field for us.”

Bennett called Tuski a “special back.”

“He's one of those kids that doesn't come around very often,” Bennett said. “He reads defenses really well and he runs hard. If you tackle him high, he'll run right through you, and when he gets in the open, he has the burst to go the distance.”

“We haven't had the same level of competition that we will see Friday night,” Geske said.

Roosevelt (4-1, 2-0) at Jefferson (3-2, 3-0), 7 p.m. The Roughriders and Democrats – unbeaten in the Portland Interscholastic League along with Grant (3-2, 3-0) – meet in a neighborhood rivalry game. It will feature two standout quarterbacks in Roosevelt's Imarion Kelly and Jefferson's Dondrae Fair.

6A No. 6 Clackamas (6-0) vs. Grant (3-2) at Franklin HS, 7 p.m.: The nonleague game was a late add to the schedule after the Cavaliers received a forfeit win over Centennial and the Generals and Wells canceled their PIL date. Clackamas has shut out its last two opponents but should get challenged by a Grant offense that is averaging 49.0 points in a three-game winning streak.

3A No. 1 Rainier (5-0) vs. 4A No. 1 Marshfield (6-0) at Cottage Grove HS, 5:30 p.m.: Another late add to the schedule after both teams received forfeit wins. Rainier hasn't played since Sept. 17, when Stone Ware rushed for 316 yards in a win over Amity. Marshfield has been nearly unstoppable with senior quarterback Dom Montiel.

Summit (4-1, 3-0) at West Salem (4-1, 2-0), 5 p.m.: The only unbeaten teams in the Mountain Valley Conference collide for first place. West Salem bounced back from losing to Tualatin 41-7 to thump Mountain View 55-20 last week. Summit has won four in a row since falling to Roseburg 23-7. It is the first conference meeting between the teams, members of the MVC since 2018.

Burns (3-1) vs. 3A No. 3 South Umpqua (5-0) at Caldera HS, 3 p.m.: No team has come within 30 points of South Umpqua, which is 5-0 for the first time since 2014. But the schedule gets tougher down the stretch for the Lancers, who follow the nonleague game against Burns by going on the road to play Sutherlin (4-1) and Cascade Christian (1-2) in Special District 2 South games. Burns suffered its first loss last week, 35-20 at 4A La Grande.