Football: Crater needs 'everything we've got' vs. No. 1 Colts
Tweet
No. 8 Comets meet rival Thurston for first place in 5A Midwestern League; Week 7 schedule loaded with other top league matchups
October 13, 2021 by Jerry Ulmer, OSAAtoday 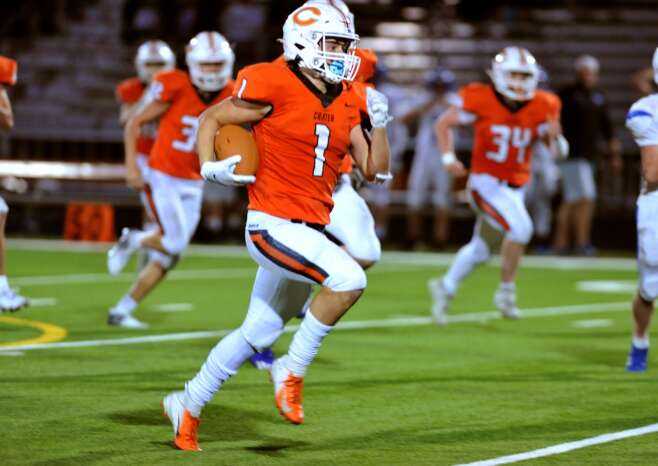 Crater football coach Berk Brown is under no illusions about what his team is facing Friday when it visits No. 1 Thurston.

With first place on the line in the 5A Midwestern League, the eighth-ranked Comets (5-1, 5-0) have a monumental task waiting for them against the unbeaten Colts (4-0, 4-0).

“It's going to take everything we've got to beat this team,” Brown said. “I think nine times out of 10, they would probably beat us. We're looking for that one time, and surprise the state.”

With only seven seniors on their roster this season, the Comets expected to go through some growing pains. But they have proven to be relentless competitors, overcoming second-half deficits to beat Churchill 15-13 on Sept. 17 and Eagle Point 17-10 last week.

Given what he has seen from his players, Brown isn't going to sell them short going into Friday

“Our kids have zero quit in them, regardless of the situation,” Brown said. “I think our group might just be young enough to not know the gravity of the situation. What I'm telling them is essentially we're playing for a conference championship. We're trying to ensure ourselves of a home playoff game in November.”

Crater is getting a big season from senior Caden Lasater, a 5-foot-11, 185-pound running back and middle linebacker. Lasater has rushed for 572 yards and five touchdowns and has a team-high 43 tackles as well as three interceptions.

Brown said that Lasater is a “football junkie” who is the team's emotional leader. When the Comets were flat in the first half of a win over Willamette on Oct. 1, it was Lasater who lit a fire under them at halftime.

“I didn't have to say a word,” Brown said. “As soon as we stepped into the locker room, he had some choice words for our group. He let everyone know that we weren't playing up to the standard that has been set for our program. Not only is he an unbelievable player, he's an unbelievable leader.”

Senior lineman Jimmy Jordahl also has been a force for the Comets. The 6-4, 230-pound Jordahl has 16.5 tackles for loss and 6.5 sacks, including 3.5 sacks last week against Eagle Point.

“He's something special,” Brown said. “It's not that he's just going to beat you with power, he'll turn around and beat you with a quick swim.”

“We put Javon back there just to add another element of athleticism,” Brown said. “He's a kid that can run the zone-read stuff and make defenses play 11-on-11.”

Crater's defense is holding opponents to 13.0 points per game, ranked second in 5A behind Silverton (11.0), but will be stretched by a Thurston offense that is averaging 47.0 points.

Colts senior tight end Jacob Newell (6-5, 230), who has committed to Nevada, has 26 catches for 443 yards and seven touchdowns and has run for two scores. Electric senior running back Gavin Knights has rushed for 252 yards and three touchdowns in two games, including 190 yards in last week's 42-32 win over Churchill.

“Newell is an absolute matchup nightmare,” Brown said. “We're going to have two or three guys always with their eyes on him. And it's going to take six of our guys to tackle Knights. He's just that elusive.

“They're by far the most athletically and physically gifted team we've faced. We have to ask our best players to defend their best players, and that's hard to do when they've got so many good players.”

A look at other top games for Week 7:

4A No. 1 Marshfield (8-0) at 4A No. 8 Tillamook (5-2), 7 p.m.: After the Pirates and Cheesemakers received forfeit league wins over Elmira and Valley Catholic, respectively, they agreed to add the nonleague game. Last week, Marshfield picked up a forfeit win over Cottage Grove and defeated 3A No. 1 Rainier 43-16.