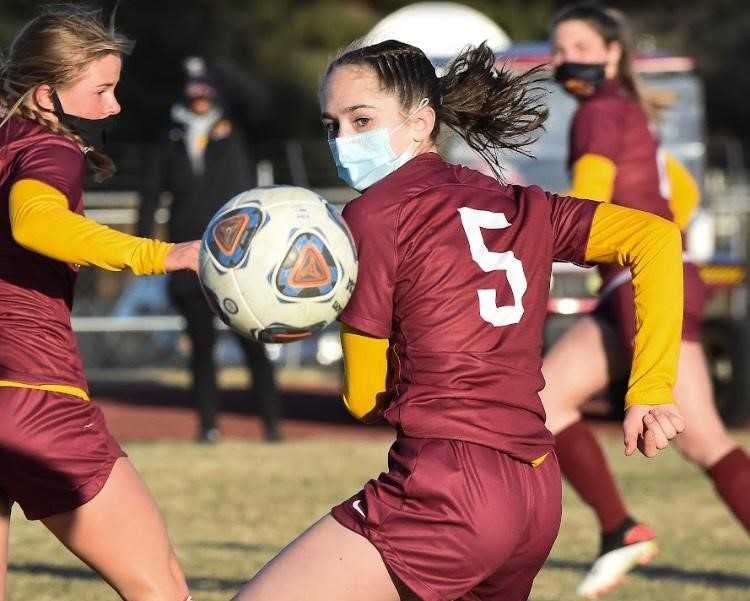 The emergence of sophomore forward Reese Wedding has helped elevate Redmond's girls soccer team, which is aiming for its first state playoff berth in 13 years.

The 5-foot-5 Wedding has scored 20 goals this season for the Panthers (5-2-1, 3-1-1 5A Intermountain Conference). She had nine goals in back-to-back games last week, tallying four in a 5-0 win over The Dalles and five in a 8-0 win over Crook County.

Wedding often uses her speed to catch up to passes that penetrate the back line. And she has become more adept at finishing.

“She's so much fun to watch,” Redmond coach Martha Segura said. “There might be five yards difference between her and the defense, and she still beats them to the ball before the goalkeeper does. A lot of times, because she's just so fast, she just dribbles around the goalkeeper, and then just taps it in behind them.”

Redmond is leaning on Wedding for more offense considering senior Dagne Harris, the IMC player of the year in the spring who scored 34 goals the last two seasons, has moved to defense, and sophomore Jillian Bremont, the team's No. 2 scorer in the spring, has not played this season after suffering a torn ACL in basketball.

Wedding is much improved from the spring, when she scored five goals. She has learned to read goalkeepers better and become more effective with the timing and placement of her shots.

“We've spent a lot of time working with her on her finishing, and the timing of it,” Segura said. “She's just so coachable and determined. She's really responded well to our coaching.

“So many players beat that last defender and they just choke and kick it right to the keeper, and she was doing that half the time. But 90 percent of the time, now, we've eliminated that.”

Wedding has excelled despite dealing with asthma. Sometimes she needs to be subbed out to use an inhaler, but other times she will use it and stay in the game.

“She'll hustle over to the sideline, take a puff, then she's on her way,” Segura said. “She battles with that, like every game, it happens at least once.”

Redmond went 6-2-2 in the spring, its first winning record since 2008, the year of its last appearance in the state playoffs. The Panthers play host to first-place Pendleton (8-1, 5-0) on Thursday.

“We're becoming a force now and building that confidence,” said Segura, who is in her sixth season as coach.

Grant senior Elle Frazier is thriving in her transition from center midfielder to forward this season, racking up a team-high 23 goals and five assists for the Generals (10-1, 3-0 6A Portland Interscholastic League).

Frazier had five goals in wins over Sunset and McDaniel, four goals in one half in a win over Roosevelt and three goals to help beat Oregon Episcopal.

Grant coach Manolis Tjuanakis credited Frazier for the work she puts in outside of practice with her twin sister, Liv. He called Elle a “fantastic team leader.”

“The younger players look up to her for all her hard work ethic during practice and games,” Tjuanakis said. “Elle is not afraid to carry the team on her back.”

Grant is No. 4 in the OSAAtoday 6A coaches poll.

North Marion senior Dominique Huapeo has been on a scoring tear of late.

Huapeo has recorded hat tricks in her last four games, consecutive wins over Madras, Estacada, Molalla and Corbett. She has 14 goals and three assists this season.

“She has really come alive in the last four games,” Huskies coach Ben Bonser said. “She is playing confidently, creatively combining well with her teammates and providing the offense we need to be successful.”

North Marion (7-2-1, 5-1 Tri-Valley Conference), No. 2 in the OSAAtoday 4A coaches poll, has not allowed a goal during a five-game winning streak that started with a 1-0 win over Gladstone on Sept. 23. The Huskies visit the top-ranked Gladiators (9-1, 5-1) in a first-place showdown Thursday night.

With 20 goals this season, Wilsonville senior Lindsey Antonson has increased her career total to 107, moving to No. 10 on the state's all-time list.

Antonson has scored three or more goals in five games this season for the Wildcats (9-0-1, 2-0 Northwest Oregon Conference), who are No. 1 in the OSAAtoday 5A coaches poll.