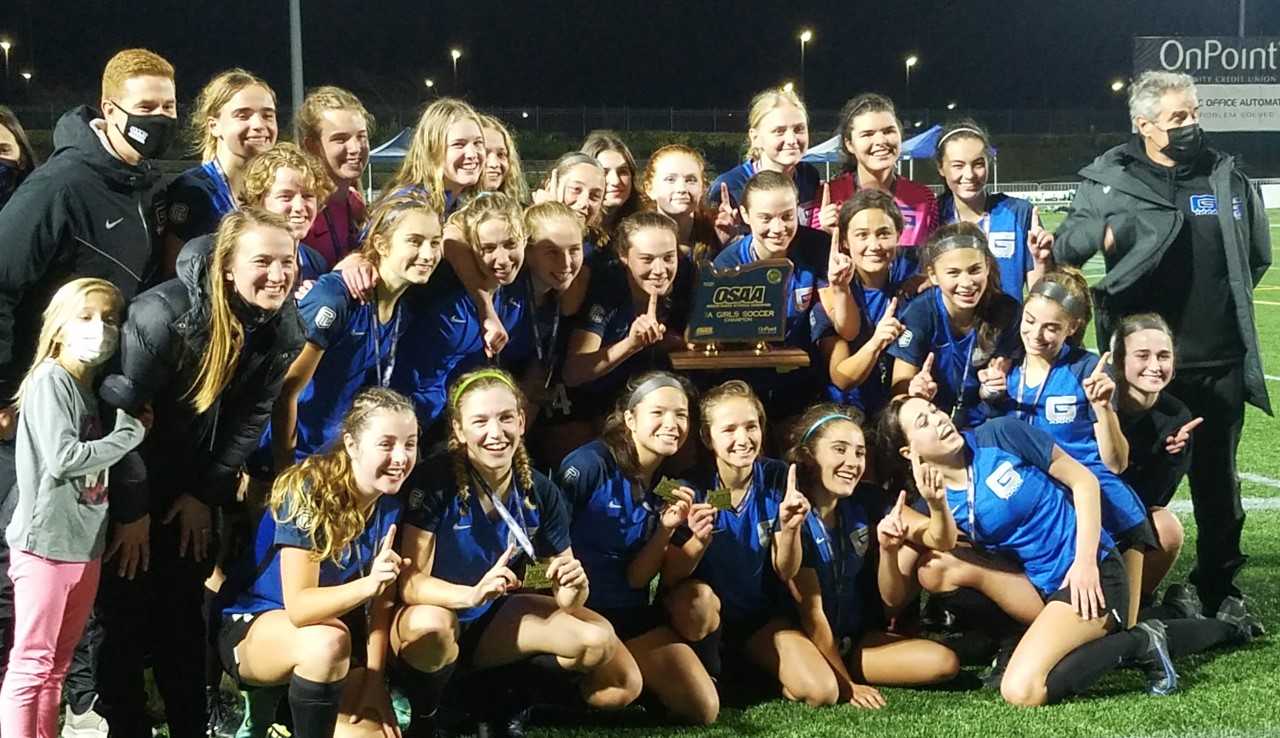 It was the first girls soccer championship in school history for the Generals.

“That’s a big thing,” coach Manolis Tjuanakis said. “We have done it with the boys. Having this group go as far as they did and bring it home, it’s a tremendous accomplishment for them, but I think also for the community. I hope it’s the beginning of more.”

Senior forward Elle Frazier scored the game winning goal with 4:39 remaining in the first overtime period, her second goal of the game.

“She’s been fantastic throughout the year,” Tjuanakis said. “She has been a player that can put the team on her back and that was evident today.”

No. 3 Grant (17-1-1) came out with two quick goals to go up 2-0 less than 12 minutes into the game. Frazier put the Generals on the board less than eight minutes into the contest, and then freshman Kate Ratanaproeksa added another goal at the 28:14 mark.

“I’m very pleased for Kate,” Tjuanakis said. “She is a fantastic player that does a lot of work off the ball that doesn’t really get any credit.”

No. 5 Beaverton (15-3-1) fought back to even the score at halftime, 2-2. First, junior Natalie Drotzmann got the Beavers on the board with a goal with 23:31 left, then senior Lauren Ashe added the equalizer 6:51 before halftime.

Beaverton was the first team to score on the Generals in their last seven games. Grant came into the game with a string of six straight shutouts, outscoring their opponents 14-0.

“They caught us off guard,” Frazier said. “When they got the goal off the set pieces it threw us off, but we were able to respond well.”

“They were working really hard,” Grant junior midfielder Katarina Roesinger said. “Initially, we were definitely flustered, since we haven’t really had goals scored on us in a while. I think we did a really good job of working hard together and coming back and owning it.”

The teams slowed down in the second half, as both teams went scoreless for the entire 40 minutes. That changed quickly in overtime.

Roesinger got the Generals on the board less than two minutes into overtime with a magnificent shot from 25 yards out on the left side. But Beaverton answered less than a minute later, as junior Roxanne Rundle found the back of the net to even the score at 3-3.

That set the stage for Frazier’s game winner. With 4:39 left in the first overtime period, Frazier ran past the Beavers back line to put away the game winner for a 4-3 lead.

“I mean, she’s amazing,” Roesinger said of Frazier. “Love her and she’s a great captain. Obviously everyone was so happy that went in. That was a great ball.”

“We knew we would play a team that could score goals and would be good on the counterattack,” Tjuanakis said. “We knew going into overtime we would have to get Elle a good chance. Thankfully, that came through and we got the 4-3 victory.”