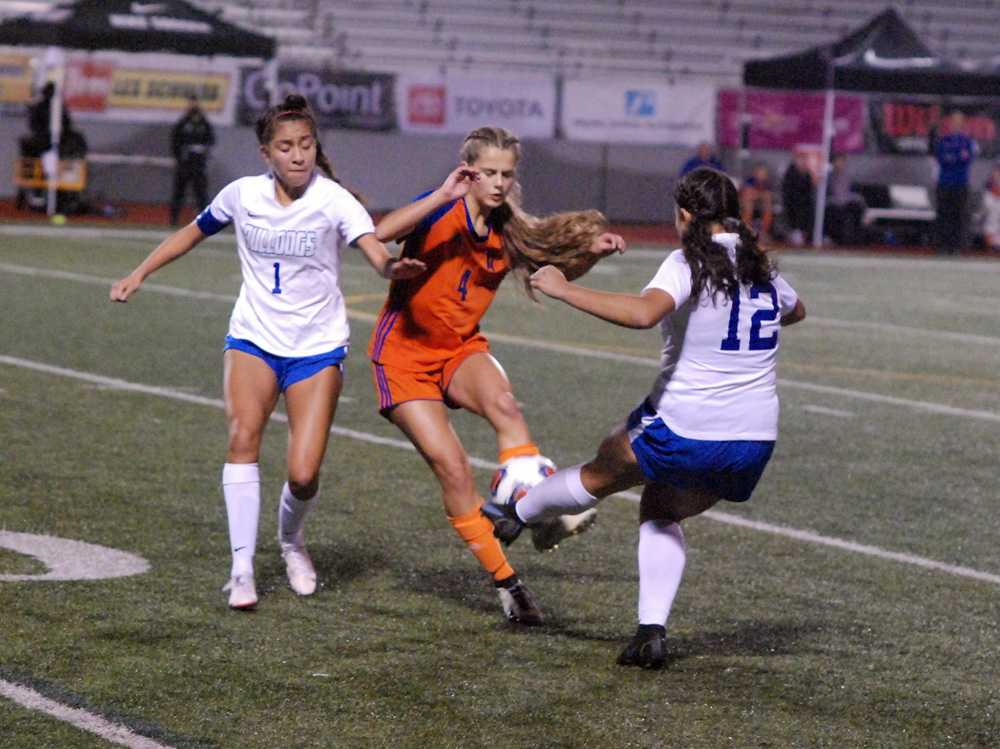 One hundred minutes – 80 minutes of regulation and 20 minutes of overtime -- were not enough to decide the 4A girls soccer title match Saturday night between two undefeated teams at the OSAA / OnPoint Community Credit Union 3A/2A/1A Girls Soccer State Championship played at Liberty High School in Hillsboro.

Nor were five penalty kicks each, with the match between Hillsboro and Hidden Valley deadlocked at 0-0.

Nor six, when the penalty kick phase moved into sudden death to determine a victor.

Finally, in the eighth round, Hillsboro keeper Litzy Gonzalez came up big with her second PK save of the evening, setting the stage for Cassidy Garibaldo to win it for the Bulldogs. Garibaldo’s squibber found a way past Skylar Willey and into the corner of the goal, setting off a wild sprint of Bulldogs from midfield, first to Garibaldo and then to Gonzalez. The joy at winning a second consecutive 4A title was unbridled, the relief palpable. It had been a struggle throughout the playoffs, and this match, to survive and advance, but Hillsboro had done it! The Bulldogs were state champions!

“It’s a good feeling,” Gonzalez said. “Woodburn is a soccer town. Usually it’s boys soccer [seven boys titles all time].  This year, the boys didn’t make it; the girls did. Since 2019 there’s been more support for the girls.”

Until the PKs, the match itself was largely uneventful, with virtually no scoring opportunities for either side. Both teams are defensive minded to begin with – Hidden Valley scored two or fewer goals in half of its matches; Woodburn had four regular-season ties and won playoff matches 2-1, 2-0, 1-0 and 1-0 in PKs. Add that the teams’ best creators and scorers are midfielders – Myranda Marquez for Woodburn and Leah Beachy for Hidden Valley – and that they marked and largely neutralized one another, and the result was very little possession, very little flow, very little of anything sustained.

Hidden Valley, the 2018 state champions, had the better of the play in the first half. The Mustangs earned two early corner kicks, thanks to nice work from Willey in the midfield and Gabby Heverly up front. The first, a nice inswinger from Beachy, found Willey’s head, but was sent wide of the mark.  The second, by Willey, was two-hand punched out of the box on a nice play from Gonzalez.

The rest of the half produced no opportunities for Hidden Valley, as center backs Caitlynn Spencer and Samantha Calderon controlled the traffic in front of Gonzalez and Marquez worked hard to slow Beachy’s dynamic runs.

Meanwhile, Hidden Valley senior keeper Olivia McCurdey, in the net because of a practice injury earlier in the week to starter Marissa Beck, was bored. She did not handle the ball in the field of play until 33 minutes had elapsed, as Willey, Beachy and Taya Mendoza worked hard to squelch any Woodburn incursions. The only thing for the large Woodburn crowd to get excited about was a nice connection from Thalia Monroy to Hadassah Nava up the right sideline, which finished with a shot well wide of the goal.

The second half started with Woodburn pressing the attack. In the first 30 seconds, and again six minutes later, the Bulldogs made Hidden Valley work on defense, thanks to efforts from Julissa Rios, Luz Rojas and Marquez.

“We knew [the first half] wasn’t our best first half,” said Whiteman. “We had to pick it up. They were beating us to the balls; beating us to 50-50s. I was really impressed and proud of how we switched gears after the half.”

Despite the increased pressure, legitimate scoring opportunities did not follow. McCurdy exhibited good hustle getting to loose balls and Mendoza was a rock anchoring the back line, with help from Lexi Hill.

Hidden Valley did not do much, either.

“We flooded them really well early and didn’t allow them to connect,” Mustang coach Dennis Hart said. “Maybe we wore down because of the energy it took.”

Spencer was particularly impactful on the back line for Woodburn.

With about 15 minutes remaining in regulation, Hidden Valley began to press the attack once more. The Mustangs, with Beachy, Willey, Riley Yunker and Ashley Yunker exhibiting spirited play, started to create more opportunities, but to no avail. The defense, on both sides, simply was superior on this evening.

The overtime was largely uneventful. Woodburn had the best chance, four minutes in, when Brendaly Anselmo and Rojas collaborated to get the ball to Nava on the right flank. Her cross made it to the far post, but Crystal Garcia couldn’t do anything with it. Later in the first 10 minutes, Beachy made a terrific run, but was thwarted by Spencer.

That was it for 11-on-11 play. The state title would be decided on penalty kicks. Each team would have five shots. The team with the most made would be the victor.

Gonzalez walked towards the west goal and was joined by…Willey. Hidden Valley was putting its bid midfielder in goal for PKs!

“We decided that, physically, the player who is 5-10 and that much bigger could give us a much better shot at blocking their attempts,” Hart explained. “That was the idea. If we could get an arm on one…Even the bigger presence makes the shooter think twice.”

The decision proved sound in the second round. After Gonzalez went right to block Hidden Valley’s second attempt, Woodburn’s opportunity to go ahead in penalty kicks flew high over the crossbar, perhaps due to Willey’s imposing size.

Both Hidden Valley and Woodburn converted their next three penalties – Willey, Ashley Yunker and Beachy for the Mustangs; Vanessa Jimenez, Marquez and Nava for Woodburn – deadlocking the teams at four made kicks apiece. Sudden death followed; anything other than two makes or two misses would decide the championship.

Gonzalez immediately came up huge, with another block. But, after consultation, the referees determined that Gonzalez came off her line too soon. Hidden Valley converted the second chance to get within a save of the title. Willey got two hands on Larissa Fregoso’s shot but could not keep it out of the net.

Gena Hoxsey for Hidden Valley and Spencer for Woodburn converted easily in the seventh round, setting the stage for fateful Round 8, as the pressure became immense for both penalty taker and would-be penalty denier.

Hidden Valley’s player did not appear confident as she approached from midfield to take the next penalty.

Gonzalez noticed that and other things.

“I was looking at her hips and the angle of her foot,” she said, as she sought clues to the corner the Mustang player would shoot towards.

Gonzalez decided to stay put, rather than diving one way or another. The decision was sound, as the ball came straight towards her for a confident save.

It was Garibaldo’s turn to kick. Score and she’d share hero status with Gonzalez in Woodburn.