3A football final: Siuslaw gets defensive to top South Umpqua
Tweet
The top-seeded Vikings hold the Lancers without a touchdown to win 14-9, three years removed from going winless
November 27, 2021 by Staff Writer, OSAAtoday 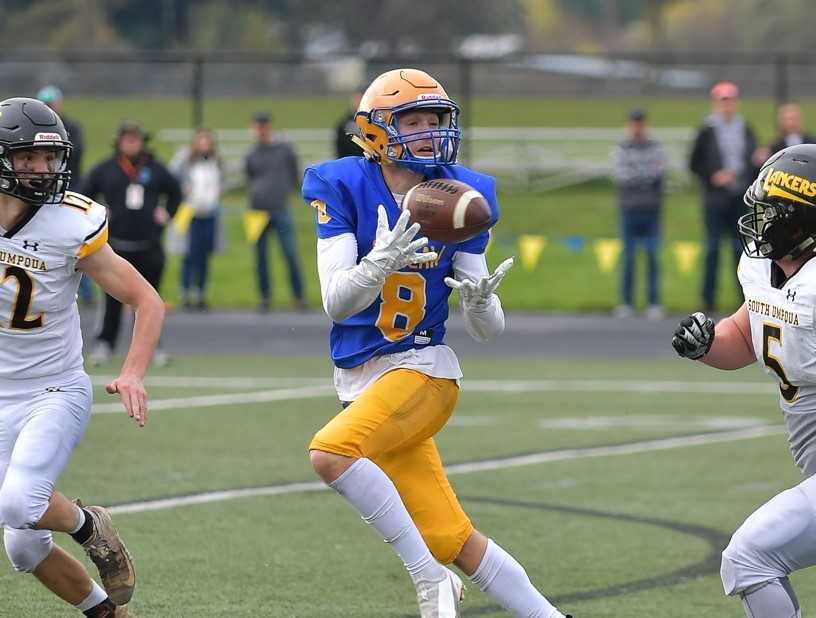 Siuslaw's Braydon Thornton had seven catches for 117 yards and one touchdown Saturday. (Photo by Andre Panse)

COTTAGE GROVE – For the first time since 2006, a state championship football trophy will be going back to Florence with the Siuslaw Vikings.

Top-seeded Siuslaw (12-0) held No. 3 South Umpqua (11-2) without a touchdown to win 14-9 in the OSAA/OnPoint Community Credit Union 3A final Saturday at Cottage Grove High School.

“If you look at what we’ve done all year, our defense has won the state championship, not our offense,” Siuslaw coach Sam Johnson said. “Our offense has put up a lot of points in a lot of games, but to hold a team of that caliber to nine points and keep them out of the end zone that entire time was an unbelievable job.”

Siuslaw finished 0-8 in 2018 before Johnson took over as coach the following season. The Vikings went 6-4 in 2019 and 3-3 in the spring before running the table this season, repeatedly pulling out games in crunch time.

“It feels unreal,” Vikings senior running back Camp Lacouture said. “You get so used to feeling the heartbreak of loss and to go a whole season and not feel that once, and outlast other teams, it’s unreal, and I can’t believe it.”

On Saturday, Siuslaw took an 8-0 lead in the first quarter on a 24-yard pass from senior Beau Erickson to senior Braydon Thornton and a two-point run by Thornton.

South Umpqua pulled to within 8-6 by halftime as Juri Moros connected on field goals of 34 and 23 yards. Moros hit a 36-yard field goal to put the Lancers ahead 9-8 early in the fourth quarter.

Siuslaw regained the lead at 14-9 with 6:47 left, driving 74 yards in 10 plays to score on a one-yard run by Lacouture on fourth down. Erickson and Thornton connected on passes of 30 and 25 yards on the series.

South Umpqua turned the ball over on downs at the Siuslaw 44 and the Vikings ran out the final 3:50.

“We knew our seniors were really good, we knew our team was really good, but we had nothing to show for it last year,” Lacouture said. “We had no accolades and no league or state championships.

“So this year, we won a league championship and we felt really good about it. But we knew we could make it deep (into state). It felt like we had unfinished business, and if we didn't do this then we would have nothing to show for this incredibly tight and talented brotherhood.”

Jace Johnson completed 15 of 24 passes for 137 yards for South Umpqua, which was going for its first championship since sharing the title with Siuslaw in 1981. Caj Simmons rushed for 49 yards on nine carries and Isaac Real had eight catches for 61 yards for the Lancers.