6A football final: Central Catholic throttles Tualatin 44-14
Tweet
The Rams return two fumbles for touchdowns in the first half and pull away in the second half for their fourth title since 2013
December 4, 2021 by Jerry Ulmer, OSAAtoday 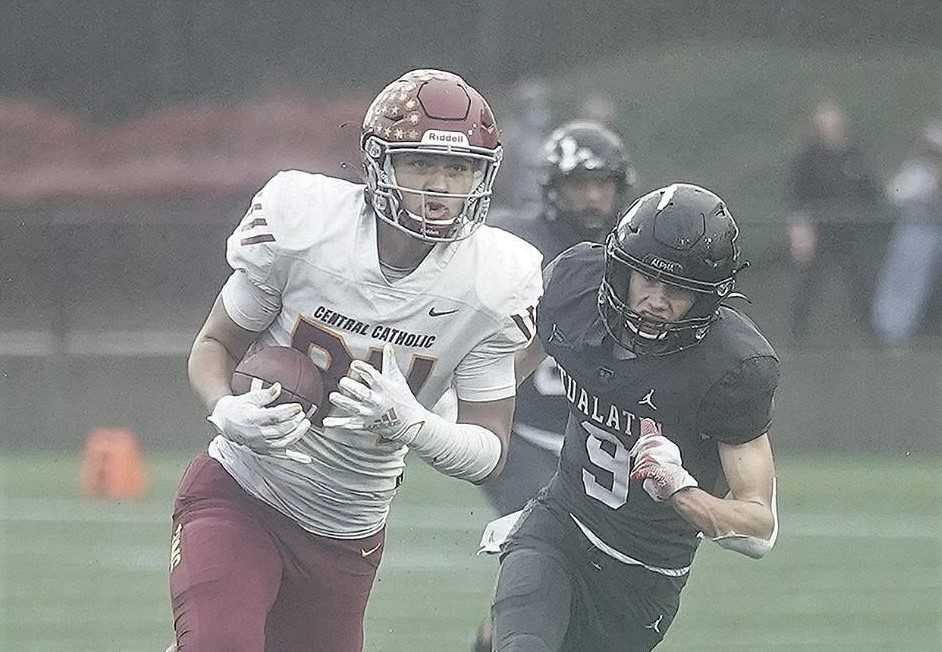 The Rams of southeast Portland wrapped up their fourth state championship since 2013 on Saturday, punctuating an undefeated season with a 44-14 win over Tualatin in the OSAA/OnPoint Community Credit Union 6A final at Hillsboro Stadium.

On a cool, wet and blustery day, fourth-seeded Central Catholic (15-0) seized the momentum in the first half by returning two fumbles for touchdowns and dominated the second half against the No. 3 Timberwolves (12-2) to repeat as champion.

“Coming in, I don't think anybody wanted to play Tualatin, because they were the team to beat,” Rams sophomore quarterback Cru Newman said. “And we came in, we trusted each other, and we got the result we wanted.”

Did the Rams anticipate their domination?

It is Central Catholic's sixth title and fourth under coach Steve Pyne. Before he took over in 2003, the Rams had not won a title since going back-to-back in 1952 and 1953.

“Not in my wildest dreams did I ever think we'd win one, let alone four,” Pyne said. “It's a pretty good feeling.”

Central Catholic never trailed Saturday against the Timberwolves, who were going for their first title.

Oregon-bound senior linebacker Emar'rion Winston and sophomore cornerback Timmy Mitchell returned fumbles 58 and 27 yards, respectively, for touchdowns in the first half. Those plays enabled the Rams to lead 21-14 at half despite being outgained 286-138.

Central Catholic's offense, directed by the heady Newman, finally found a rhythm in the second half. The Rams finished with a 445-398 advantage in total yards.

“The defense stemmed the tide,” Pyne said. “We were not functioning very well in the first half offensively, and they gave us some breathing room. We made some adjustments at halftime. We were able to run the football a little bit better, and kind of separated ourselves in the third quarter.”

Once the Rams got rolling, they seemed almost unstoppable.

“We kind of were playing a little bit scared in the first half,” Bynum said. “We went into the second half relaxed, and just went out and played. And you see the result. … This is not surprising at all.”

Bynum's 24-yard touchdown run on the first series of the second half made it 28-14. Wajskol's field goal, aided by a strong wind, pushed the lead to 31-14. The Rams' last two scores came on a 53-yard pass from Newman to Williams and a four-yard run by senior Jacob Hardeman.

Central Catholic's defense held Tualatin to 112 yards in the second half. Timberwolves senior running back Malik Ross ran for 138 yards on 16 carries in the first half but managed only 37 yards on nine carries after the break.

Mitchell said the Rams' defense got refocused at halftime.

“We just talked in the locker room about it,” Mitchell said. “We said, 'We've got the best defense, and we can stand up to any team that comes in our way.' And we went out and did what we had to do.”

The loss stung the Timberwolves, who finished as runners-up for the third time since 2007.

“We prepared a lot in practice, but they just have dudes,” Tualatin senior receiver Cole Prusia said. “I personally think we're the better team, but they came out, they were physical, and they shocked us. It was a big, old punch in the face.”

The 6-foot-7, 235-pound Williams, one of the top junior recruits in the nation, was a matchup nightmare for Tualatin. He lined up outside and showcased his speed and ability to run after the catch, manhandling defenders.

“It's so nice. And I get him for another year,” Newman said of Williams, who had a team-high 14 touchdown catches this season. “I love that guy. There's no one that can match up with him. He's the best of the best.”

The Timberwolves have better size than most teams in their secondary, but they still couldn't do anything with Williams.

“That guy, when the lights are the brightest, he lights up,” Pyne said. “That's something he's got to work on, to be more consistent, and stuff like that as he moves on to next year and into college. But man, does he makes some plays, too. Unbelievable.”

“To be that big, that strong, that fast, it just makes him even harder to guard,” Burke said. “He's special. You'll see him on Sundays.”

In the second half, Williams had a 50-yard catch to set up a field goal, as well as his touchdown, which was made possible by a crushing downfield block by senior receiver Jordan King.

“I turned around and I saw Riley had the ball, and I was like, 'Got to get my guy a score,'” said King, who also had an interception on defense. “That's just the theme of the season, man, just fighting for each other, just being there for each other to make plays. It's awesome.”

Newman put the final touches on a breakout sophomore season with another strong all-around performance. He had a 26-yard run., but his most impressive play was an 11-yard scramble on third-and-10 in which he escaped a sack and weaved and dodged through defenders, breaking several tackles.

“That kid made some unbelievable plays today, for a sophomore,” Pyne said.

“He can get through everything,” Bynum said. “And he's only a sophomore. He's going to kill the state for the next two years.”

For the season, Newman passed for 2,679 yards and 37 touchdowns with four interceptions and ran for 562 yards and five scores.

“Sophomore quarterback, doing this, leading our team to a state championship, he's a great player, great leader, great dude,” Williams said of Newman. “The ceiling is high. It's definitely up there. I feel like for sure he can be a D-I quarterback.”

The 6-4, 250-pound Winston ended his high school career on a high note, not only returning a fumble for a touchdown, but creating the fumble that led to Mitchell's score.

“Emar'rion has been steadily getting better and better,” Pyne said. “It looked like he maybe had his best game when we needed it the most.”

Winston's second state title pulls him even with his brother La'Mar, a member of the 2013 and 2014 championship teams.

“La'Mar can't get the bragging rights quite yet because I don't think he scored a defensive touchdown in the championship game,” Emar'rion Winston said. “He don't get it no more.”

Winston's fumble-return touchdown – off an errant snap – gave the Rams a 7-0 lead.

“Instantly I thought, 'Dive on the ground, get the ball back,'” Winston said. “And then I said, 'Why? Be a playmaker.' And I just grabbed the ball and I just took it. Luckily, God blessed me with a little turbo to get through, because I'm not the fastest guy.”

The Timberwolves were left to wonder how the game would have unfolded without the first-half fumbles.

Tualatin will graduate what many believe to be the best class of players in school history.

“This was a goal since sophomore year, our senior year, to get to the state championship game,” Burke said. “It was a great season. That was the goal, that was the dream. We just wish we could have come out with it.”