Girls basketball: No. 5 Crook County starting to believe
Tweet
The Cowgirls, under second-year coach Bob Boback, are off to a 10-1 start and heading for their first winning season in a decade
January 4, 2022 by Jerry Ulmer, OSAAtoday 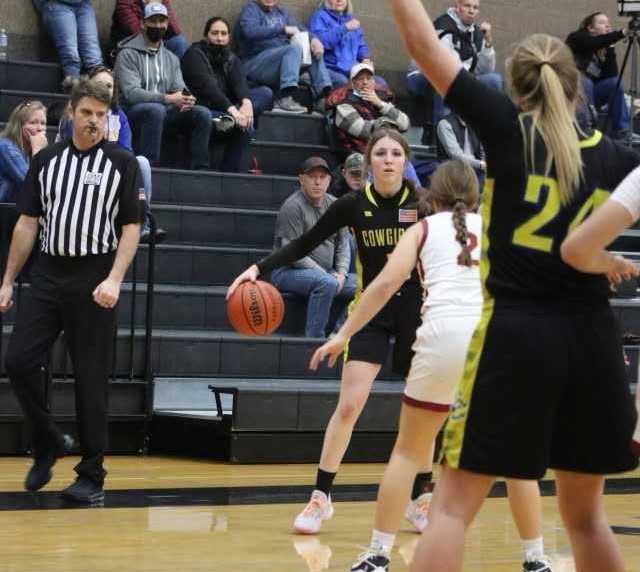 Crook County has a well-earned reputation for volleyball, winning eight consecutive state championships from 2006 to 2013.

But now the Cowgirls are starting to demand attention in basketball.

Crook County, which hasn't had a winning season since 2012, is off to a 10-1 start and is No. 5 in the OSAAtoday 5A coaches poll. The Cowgirls have posted their first-ever wins over Bend, Summit and Ridgeview.

“A lot of it's been convincing them they can do it,” second-year coach Bob Boback said. “We're learning how to win, and we're beating teams that we've never beaten. So our confidence is growing with each game. It's really fun to watch them grow.”

After retiring as a waterfront Teamster and moving to central Oregon to be closer to his daughter's family, he took over a program that had not won more than eight games in a season since finishing 14-12 in 2011-12. In his first season with the Cowgirls, without a senior in the starting lineup, the team went a promising 6-8.

“They were much better than what their record showed last season,” Boback said. “We probably should've been 10-4.”

“She's probably the best point guard I've ever coached for girls,” Boback said. “Just the way she plays, and her leadership, are amazing. Katelynn has the freedom to roam. She picks up a lot of steals because she's just really good at anticipating the passing lanes.”

“I've never had two posts that are both inside-out,” Boback said of Bales and Brooks, both soccer players. “They can both shoot the threes and they can both post-up.”

The starting lineup also includes senior guard McCall Woodward, who was sidelined by an broken ankle last season, and 5-10 junior guard McKenzie Jonas, the IMC player of the year in volleyball.

Boback said Jonas is “probably one of the best athletes I've ever coached. She's been our stopper. She's long and she's competitive. She's fearless.”

“She comes in the game and the intensity goes up about 50 percent,” Boback said. “She does it all. She's all over the court. She gets every loose ball. She's only 5-8, but she plays like she's 6-feet.”

Senior guard Lauren Papke, the team's defensive stopper last season, has been out since suffering a sprained knee in the team's fourth game.

“If we get her back, we'll be seven strong, and with a really good defensive unit,” Boback said. “She's one of the toughest kids I've ever had on my team.”

“We really brought it to another level in the fourth quarter in games when we had to,” Boback said. “When we've had to match the intensity of the other team, we've done that.”

The win over Ridgeview (8-4) – which went 18-2 in the IMC the last two seasons – in the final of the Sisters Holiday Shootout last week was particularly meaningful for Crook County. Weaver scored 22 points and Bales and Brooks added 11 points apiece for the Cowgirls, who came back after trailing by six points in the third quarter.

Boback said he told his players before the Ridgeview game that he expected them to win.

“I said, 'This is how you've got to think,'” he said. “My team is getting that mentality that we can play with anybody.”