Boys basketball: No. 1 Wilsonville turns back Scappoose 42-32
Tweet
Tristan Davis scored 17 points as the Wildcats overcome a slow start and beat the Indians to take over first place in the NWOC
February 8, 2022 by Jerry Ulmer, OSAAtoday 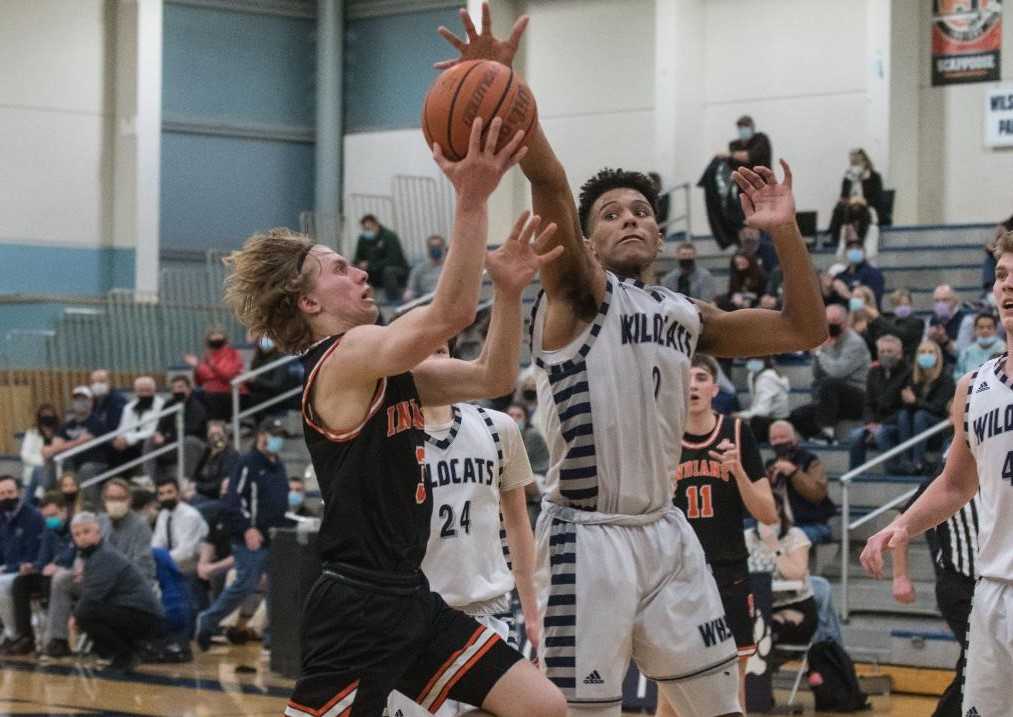 WILSONVILLE – The way No. 1 Wilsonville started Tuesday night, it appeared as if the Wildcats iron-fisted grip on 5A Northwest Oregon Conference boys basketball might be in jeopardy.

Playing for first place against visiting Scappoose, Wilsonville missed its first 10 shots and fell behind by eight points in the first quarter.

“We were out of sync on offense,” Wildcats coach Chris Roche said. “That's probably a credit to their defense. They were definitely the more physical team early, so we found ourselves in a hole.”

“I think we just realized what we were playing for,” junior post Tristan Davis said. “For me personally, and for our team, we're trying to be great. And that's what we're playing for.”

The 6-foot-7 Davis helped jump-start the offense and finished with a game-high 17 points. The Wildcats also got seven points each from sophomore wings Kallen Gutridge and Kyle Counts, who hit a big three-pointer midway through the fourth quarter to open a nine-point lead.

The Wildcats have won seven in a row since a 53-51 loss at La Salle Prep that ended their 77-game conference winning streak. The loss was a gut-punch for a proud program that has appeared in five 5A finals since 2015, winning three.

“The big thing after that La Salle game, we're not trying to be like the past Wilsonville teams, we're trying to be like this year's team,” Davis said. “That's what matters. We're going to get better. We've got different guys than the last years, with the streak. Coach said the best team he ever coached lost in league.”

Roche said the Wildcats are “still a work in progress.” They never did find a consistent flow on offense Tuesday, shooting 37.5 percent (18 for 48).

“They're great kids, but we don't quite have the leadership we need yet,” Roche said. “I think they want to do it, but we don't always play the right way. We don't always play hard enough. If we can't run an offense better than we did tonight, it's going to be tough. But we also have times when we find our rhythm and we're pretty good on offense.”

Davis, a highly recruited defensive end in football who has offers from Colorado and Nevada, scored seven of Wilsonville's first nine points. He kept it going in the second half, scoring on putbacks, jumpers and spin moves.

“I play my part,” said Davis, who averages 10 points per game and has a season high of 28. “We've got talented players on this team. Anybody in the rotation can get their own shot, they can go off. Some games they shine, some games I shine. I just got what was there. When we moved the ball, I got the shots that were open for me.”

Davis also drew the tough defensive assignment of guarding Scappoose 6-3 senior guard Luke McNabb, who scored 11 of his team-high 13 points in the second half.

“I thought he played great,” Roche said of Davis. “He had to guard a really good player in McNabb, but he not only did a very good job defensively on him, he asserted himself on offense. He's had some big games for us, especially lately. He came up big tonight. He was the difference-maker tonight.”

McNabb scored off a pass from junior Skyler Schmidt to draw the Indians within 23-22 late in the third quarter. But Wilsonville scored the next six points – four by Davis – to take command.

The game represented a big opportunity for Scappoose. The Indians went a combined 2-28 in the NWOC in their first three seasons after leaving 4A. But they made the leap to conference contender this season, losing only to Wilsonville, including a 58-41 home defeat Jan. 22.

“I'm so proud of these guys,” Scappoose coach Matt Humphreys said. “My first year at Scappoose we were 1-21, and now we're competing with the best in the state. How could you not be anything but elated with these guys? When you put it in perspective, it's pretty incredible.

“They were very focused, really appreciative of the opportunity. They created it for themselves.”

The 6-8 Schmidt, who entered averaging a team-high 19.6 points per game, finished with five points on 1-for-6 shooting. He had difficulty getting a clean look against the defense of 6-10 senior Logan Thebiay.

“For a 6-10 kid, he's very athletic,” Roche said of Thebiay. “He's a legit 6-10 and he's strong, but he moves great. He wins lines in practices. He's pretty versatile. Schmidt is an excellent scorer, and Logan was out there by himself on him and did a great job.”