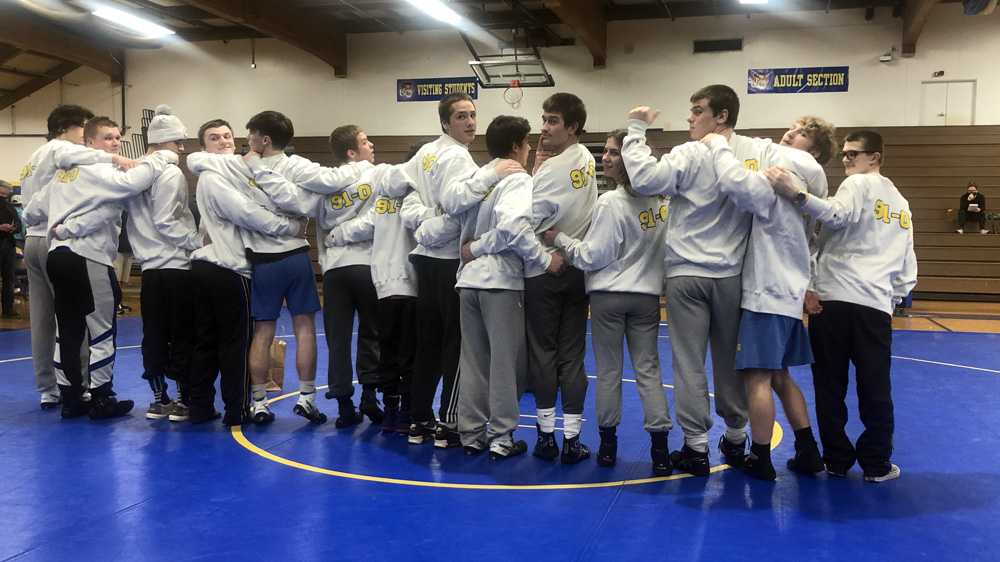 Newberg's 14 seniors show off the sweatshirts they earned, no sweat, by defeating Glencoe on Thursday

When Newberg’s current wrestling senior class enrolled as freshmen, they could not possibly have anticipated going all four years without losing a single dual meet.

After all, it had been 10 years since the Tigers had captured an OSAA 6A state title.

Teams cannot expect to run the table for four years, especially with Newberg’s kind of schedule, unless they are the very best in the state.

Thursday at Newberg, Neil Russo’s squad completed the unexpected. By thrashing Pacific Conference rival Glencoe, 81-0, the Tigers won their 91st dual meet since the start of the 2018-2019 season.

That number might have been 100 or more had last season been more “normal,” rather than Covid delayed and shortened.

Russo, who’s been watching wrestling in Oregon for half a decade, including 24 years as Newberg’s head coach; said that he’s never heard of any school coming close to the dual meet record that this group established.

“A couple of years ago the kids started digging into consecutive dual meet wins,” he said. “In Oregon they found that Crook County had won 55 in a row in the late 70s and early 80s I believe.”

To win 91 matches, or even 55, takes a little bit of luck as well as great depth.

“People that understand wrestling know that you can have a great tournament team but not a great dual meet team,” Russo explained. “The fact that this senior class has 14 wresters and they are all spread out in weight is fortunate. We have weights covered and have stoppers in the middle. There’s nowhere to run and hide in that lineup. There’s no way to get an advantageous matchup in that lineup. It’s a pretty special group. It’s as good a dual meet team as I’ve ever seen.”

Not all of the 91 victories were as businesslike as Thursday’s win. There have been several memorable moments along the way.

In 2018, when the seniors were freshmen, Newberg wrestled Chiawana of Washington at the Northwest Duals. The Tigers won on criteria after the dual ended in a 33-33 tie.

Newberg also won three Oregon Classics, considered the unofficial dual meet state championships. The Tigers would certainly have won a fourth but for the coronavirus, which canceled last year’s event.

At the Classic in January, 2019, the tournament stopped the meet in the middle of the first day for a dual between Newberg and Culver, the small-school Oregon powerhouse. The teams wrestled all 14 weight classes at the same time at the Deschutes County Fairgrounds in Redmond. Newberg won, 45-27, in what was dubbed “The World’s Fastest Dual Meet.”

Later in the Classic, Newberg took on Roseburg in the 6A finals. The dual came down to the last match, with the winner taking the dual and the title. Newberg heavyweight Connor O’Bryan won, 6-4, to give Newberg the win by a single point, 32-31.

Another of the original six, Evans, won his match by forfeit.

“I wish I could have gone out there and competed,” he said.

Sophia Redwine, a nationally-ranked girls wrestler, also needs to be mentioned. She was in the lineup pretty regularly her first two years, before transitioning to compete only against females the past two seasons.

Redwine described being part of the group to win 91 straight as “very humbling.”

“It’s been a good ride,” Kelley said. “It will definitely be a bookmark in my life.”

“They have been a special group since the beginning,” said Russo. “Three were in the state finals as freshmen. They’re hard workers, they’re athletic, they’re athletically minded, they’re competitive. They do all the things right. When you see that and see all that action get rewarded, it’s even better.”

With duals now behind them, Newberg’s seniors will focus on the District and State meets over the next few weeks to close out their high school careers. Newberg has 13 all-time OSAA state titles, including a current streak of two straight.

Why is Newberg wrestling so good?

“The wrestling community in Newberg is established,” Russo explained. “There Is tradition. I am coaching kids right now whose parents I coached. Their grandfathers my dad coached. So we’re on a third generation of athletes and all of their families are involved. We have a multitude of people who come into our room and help us with our program on and off the mat. They contribute to the program, they coach, they fund raise, they help us with events…When you have a community behind a program and a community-based program, it makes it easier to be successful.”

The group of 14 seniors were products of that tradition to be sure, but Russo knows that this class has added to it.

“We were definitely a force to be reckoned with,” said Kelley.

“The bar had been set high for them,” Russo said. “They have left it even higher.”