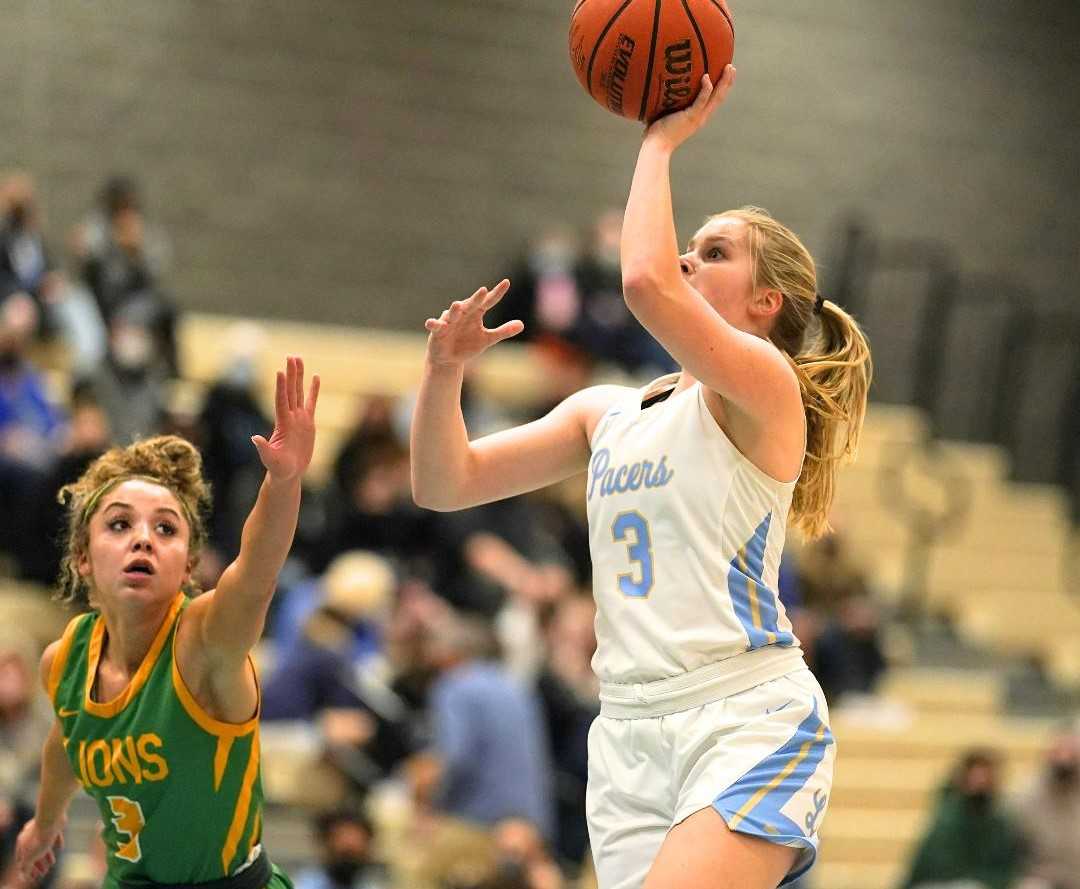 LAKE OSWEGO – After years of viewing it from afar, Lakeridge is starting to make itself at home in first place.

The upstart Pacers – five years removed from finishing 1-23 – took a giant step toward the Three Rivers League girls basketball title Friday night with a 46-39 win over visiting West Linn in a battle of first-place teams.

“It's crazy coming from where we were my freshman year,” junior wing Keelie O'Hollaren said. “It feels great. It's surreal to be the team to bring us back to the top.”

O'Hollaren and senior point guard Reese Ericson each scored 17 points for Lakeridge, which scored the last 10 points of the first half to open a 24-13 lead and survived a late push by the Lions.

The win served to validate Lakeridge's 53-48 win at West Linn on Jan. 18, which marked the first time the Pacers had beaten the Lions in 12 seasons.

“After that last game, we just knew they were going to be coming in battling,” Ericson said. “It was going to be a test of our mental toughness.”

The Pacers were up to the challenge against the Lions, who had won six in a row since that loss.

“Our theme for the year is, 'Expect it,'” O'Hollaren said. “Expect to win, expect to come out hard, expect the other team to come out hard. We have a target on our back right now and we just wanted to come out and prove it again.”

And the Pacers believe they have plenty to prove.

Lakeridge went 13-2 last season, with both losses coming against West Linn. It was the Pacers' highest winning percentage since 2005, when they went 26-3 and took fourth place in the state tournament.

“We had a great run last year, and coming back after graduating eight kids, everybody thinks you're rebuilding,” Lakeridge fifth-year coach Jason Brown said. “Clearly, we're not. We've got some talent. We're just bringing everybody along.”

The season has been a thrill for the talented Ericson, who has signed with Army.

“It's meant so much,” Ericson said. “Having it be my senior year, I'm just so proud of this team. We have so many young players that are new to varsity. We're just a different team. We have so much confidence in each other.”

The Pacers are feeding off the chemistry between Ericson and O'Hollaren. During the 10-0 run to end the first half, Ericson twice drove and found O'Hollaren open for three-pointers.

“She finds me so well,” O'Hollaren said. “She has great court vision. I'm really grateful to play with a point guard that can find me like that. Getting defenders on me, face-guarding some games, she still finds a way. I appreciate her a lot.”

Ericson and O'Hollaren also have been club teammates for the last three years.

“She's a total gym rat. She's in the gym all the time,” Ericson said of O'Hollaren. “I get there early, and she's already there.”

After Ericson drove for a layup to make it 26-13 to start the third quarter, West Linn began to push back.

Freshman guard Allie Roden, West Linn's leading scorer this season (15.4 points), finally got on the board with two three-pointers, the second one closing the gap to 32-27 late in the third quarter. Junior Avery Jordan added another triple to draw the Lions within 33-30.

Lakeridge extended the lead to 42-34 on a jumper by Ericson with 3:59 left in the game, but West Linn kept coming. Senior Campbell Sheffield scored inside to make it 42-39 with 1:20 left, and after a forcing a turnover, the Lions got the ball right back.

But senior Isabelle McVicker missed a three-pointer that would have tied it with one minute left, and Lakeridge put the game away on a rebound basket by O'Hollaren and two free throws by Ericson.

“We had our chances. We were knocking at the door,” West Linn coach Brooke Cates said. “We were right there. The ball just didn't bounce our way tonight.

“They came out ready to play, and we weren't ready the first half. It took us a half to get going, and by then, they had us. It was tough when they got that lead. We felt like we were always trying to play catch-up.”

“We'll pick up the pieces,” Cates said. “We still have a shot, but we need somebody else to beat them.”

Lakeridge gets a chance to avenge its only league defeat Saturday afternoon when it plays host to Tualatin (10-8, 5-3). The Pacers lost on the road to the Timberwolves 39-28 on Feb. 3.

“Right back here tomorrow against that zone defense,” Brown said.