Dance: Gresham rises to a win at Parkrose
Tweet
Gresham, Canby, Valley Catholic and Tigard among the winners in Week 4
February 24, 2022 by Danielle Schneider, OSAAtoday 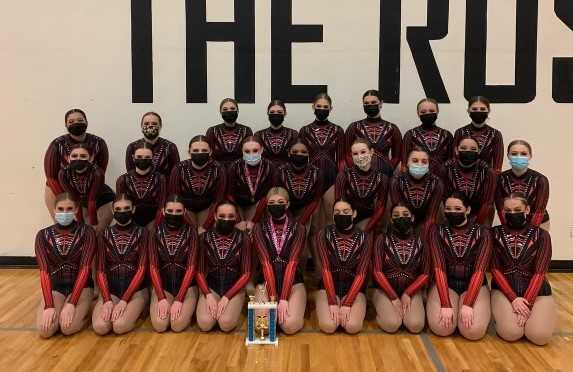 The Gresham Rhythmettes after winning the 6A division at the Parkrose competition.

In a six-team division, Gresham earned first place (15.39) in the 6A division for its performance of “Here I Am.”

“The competition at Parkrose is a memory that will stay with me forever. I remember being so happy and overwhelmed that I could share the feeling of winning first place with my team for the first time this year. I wish for that feeling again. I know the team and I are going to work our hardest in the next few weeks, because we all know we have what it takes to place first again,” shared Trinity Walsh, Gresham senior.

Tigard captured first place (17.00) in the 6A division for its debut performance of “This Bitter Earth.” Westview (16.39) and Tualatin (16.06) rounded out the top three in the division. Bend and Sandy also debuted their state routines for the first time this season finishing fourth (11.83) and fifth (11.28) respectively.

Valley Catholic captures first place (16.22) in the 4A-1A division. This marks the third first-place finish of the traditional season for the Charisma. Debuting its routine Stayton finished second (15.94). Astoria finished third (15.06) and Gladstone was fourth (14.39).

David Douglas was the only team to compete in the Show division. The Tams earned a 14.06 for their performance of “Desolate.”

The winter dance competition schedule continues with events hosted by Pendleton and Sprague on February 26.