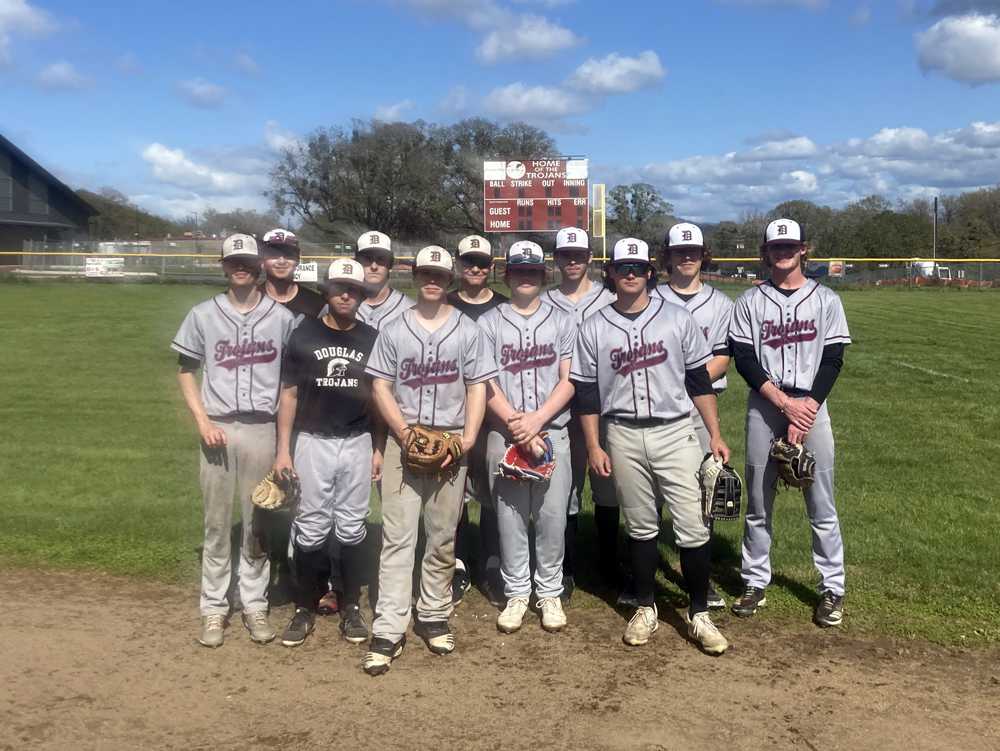 Douglas scored six runs in the second inning and held on for a 7-5 win over Umpqua Valley Christian on Monday night at Bill Gray Legion Stadium at Champion Car Wash Field in Roseburg.

Douglas, a top 3A squad ranked third in the OSAA power rankings; got a route-going performance from sophomore Tristan Ledbetter, and hammered out 12 hits, its best hitting day of the season. The win came over a UVC squad that is 1A by enrollment and currently ranked No. 1 in the 2A/1A rankings.

“It’s meaningful because of the caliber of the ball club we beat,” noted Douglas head coach Ron Quimby. “They’re ranked right up there in the top. And you don’t want to lose to a group of kids lower than you in classification.”

On a night where it rained on and off and a persistent breeze put a chill in the air, Douglas (5-2) got the scoring started in the top of the second. Ledbetter started the inning with a single and was sacrificed to second, as the Trojans looked to put a run on the board. They would get much more than a single tally; instead scoring six times.

Joel Griffin drove in Douglas’ first run with a double, one of five Trojan extra base hits in the frame. Tyler Waldron, Garrett Schulze, Evan Martin all added RBI knocks ahead of Ledbetter’s second hit of the inning, a double that drove home two.

“We misplayed two balls in the outfield, which cost us four runs, “ said UVC skipper Dave York. “That changed the complexion of the game.”

Douglas added an insurance run in the fourth, when Kash Richardson’s fly ball cashed in Martin, who doubled to lead off.

The 7-0 lead seemed safe with Ledbetter on the bump. But the sophomore ran into trouble in the bottom of the fifth inning and UVC took advantage with four runs. A couple of walks, an error and RBI singles from Ty Hellenthal and Nathan York made the score competitive.

UVC added another run in the sixth to get within two.

“I was beginning to get a little bit worried in the sixth, but the kids pulled together and fought hard,” Quimby said.

UVC (6-3) had the top of the order up in the seventh and was hopeful to rally against the tiring Ledbetter. Instead, the hurler set down the Monarchs in seven pitches.

“We didn’t handle those at bats as well as we might,” York said. “This group is really young. In those pressure moments, we’ve got to learn to relax more.”

“It was a well-played ballgame on both sides that turned into a nail biter at the end,” Quimby said.

“I like the way they stayed in the game and competed,” York said of his charges. “We don’t make the mistakes normally that we made yesterday.”

Douglas, whose only losses have come to 4A Henley, play Phoenix on Thursday then head to Marshfield for a Saturday double dip. Quimby said he was looking forward to playing the Pirates.

“We’ve got our work cut out,” he said. “They’ve always been tough and used to be in our league. It’s like an old rivalry coming back.”