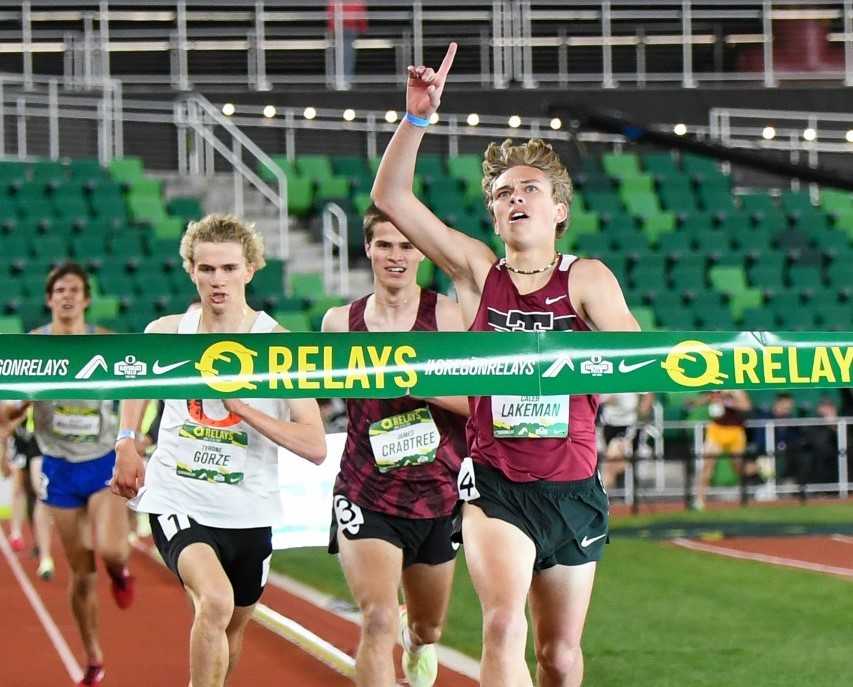 Tualatin's Caleb Lakeman won the 3,000 at the Oregon Relays, moving to No. 4 on the all-time list. (Becky Holbrook/DyeStat)

The 3,000-meter race in the Oregon Relays at Hayward Field on Friday was run at such a feverish pace, it reshuffled the top of the state record book.

The first six finishers ran times that rank among the top 12 all-time in the state.

“I was talking to a number of coaches like, 'Did we just see something?'” Tualatin coach Hashim Hall said. “And every one of them said that it was probably the greatest 3,000-meter race in Oregon history.”

“It's quite amazing what this group of upperclassmen has been able to do,” Tualatin distance coach Andrew Bonica said. “They're really transforming distance running. This is such a deep and talented field, and well disciplined. I think the state meet will be something that's entertaining in every race.”

It was another big victory for Lakeman, who was coming off a win and a state-best time (3:52.35) against a similarly stacked field in the 1,500 at the Chehalem Field and Track Classic on April 15. Lakeman, fifth in the 6A cross country meet last fall, has found another gear this spring.

“I'm really impressed with the way he's grown,” Bonica said. “Early on in his running career, he would get really nervous before those big races, and it would impact his performance. He's done a really good job of finding ways of becoming really focused and staying calm, and using positive energy as he goes into those races.”

The Georgetown-bound Lakeman trailed by about five meters with 200 left before making his move. The race played out according to Lakeman's plan, according to Bonica.

“In his mind, he was pretty much in control as he was heading into that race,” Bonica said. “He's very well aware and very well studied of his competitors. He knows himself as a racer, too.

“He was responding to those moves and he was just really confident in his kick as he was heading into that last lap. He was really where he wanted to be. It very much matched the race from the week before, being there and then trusting himself to know when to go. In the home stretch, he took it, and was strong.”

“He's the most balanced runner that I've ever coached,” Bonica said. “He can stretch it out to a 10K and do great, and he can drop down to a 400 and be stellar.”

Lakeman and his junior brother, Aaron – who is No. 7 in the state this season in the 1,500 (3:55.31) – have a running pedigree. Their father, former South Eugene standout Dirk Lakeman, won the state title in the mile in 1977 and held the state record until Rupp broke it in 2004. He ran in college at Arizona.

Lake Oswego sophomore Mia Brahe-Pedersen continues to inch closer to state records in the 100 and 200.

Brahe-Pedersen won both events at the Oregon Relays, clocking personal bests of 11.34 and 23.23. She is chasing after the state marks of 11.30 and 22.95, set by Churchill's Margaret Johnson-Bailes in the 1968 Olympics in Mexico City.

"Where I'm at right now is a lot further along than I thought I was going to be at this point in my season," Brahe-Pedersen told DyeStat. "But still, I've always had big goals for my 10th-grade season."

Roosevelt senior sprinter Lily Jones, who committed to Oregon this month, had another outstanding meet. She finished second in the 100 with a PR of 11.44, No. 3 all-time in the state, and was second in the 200 (24.15).

Brahe-Pedersen and Jones have developed a friendly rivalry.

"Mia and I love competing against each other. We definitely feed off each other," Jones told DyeStat. "It could be either one of us on any given day (winning), but I'm so happy for her."