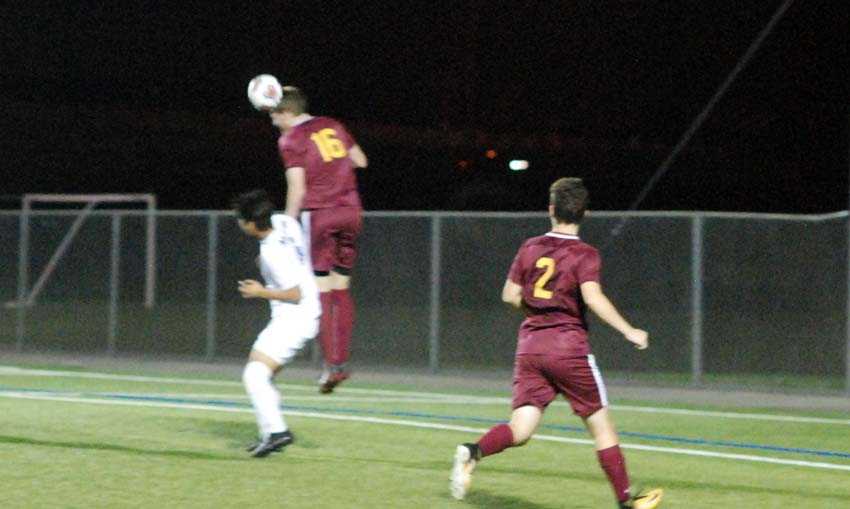 See below for results and highlights from all the playoff matches in boys soccer, as the second round in 6A and the first round in the other three classifications were contested on Tuesday. We will add more highlights as we receive them.

The quarterfinals in all classifications are Saturday.

Forest Grove 2, Gresham 1 (O.T.) -- Alan Rincon scored his second goal of the match in overtime to propel the Vikings over Gresham on the road. Rincon scored the first goal of the match on a tap-in with 15 minutes gone by in the first half after capturing a fas post cross. Gresham tied the game on a Jole Rodriguez penalty kick and that's where things stood before Rincon dribbled through four defenders in extra time and finished with a rocket shot to the near post.

Jesuit 1, Tigard 0 – Aiden Azavado scored on a header off of an Oscar Baudey cross to break a scoreless second-half tie in Jesuit’s win over the Tigers.

Grant 1, Sunset 0 – A transition goal 15 minutes into the match gave Grant the win over the Apollos, who hit the post on a header in the final eight minutes but could not find the net.

David Douglas 4, Beaverton 0 – The Scots scored two goals early and two goals late to hold off Beaverton at home. Rigo Mendez set the tone for David Douglas with goals six minutes apart in the first 10 minutes of the game.

West Linn 4, Lake Oswego 1 (O.T.) – West Linn scored three goals in overtime to break open a tight affair with its Three Rivers League rival. After LO opened the scoring, Gavin Tinlsey scored the first of his two goals to send the match into overtime. Garrett Jackson’s goal for the Lions in extra time proved to be the clincher.

South Eugene 3, Lincoln 0 -- Sai Bliss-King broke a scoreless tie with a goal midway through the first half and Devin Emerson scored twice after the break as the Axe shut out a playoff opponent for the second straight match.

Summit 4, Liberty 2 (O.T.) – Summit stormed from behind twice in Tuesday’s match before scoring twice in overtime to win. Liberty led 2-1 midway through the second half when Simon Kidder crossed a ball to the far post that was headed in by Kamdon Simmons. Four minutes into overtime, Summit scored the go-ahead goal on a Jace Marshall volley off of a Jack Fecteau cross. Two minutes later, Owen Adams scored an insurance goal on a looping corner kick that went over the Liberty keeper’s head.

La Salle Prep 3, North Salem 1 -- The victors got first-half goals from Luke Strange, Noa Taylor and Karter Cook and were never threatened in the home win.

Ridgeview 4, Eagle Point 1 --Ridgeview scored twice in the first half, both goals by senior Cade O’Neill. After Jayden Budrow scored for Eagle Point in the 14th minute of the second half, the host Ravens scored twice more, both by senior Christian Kim, to put the match away.

Wilsonville 2, Ashland 1 (O.T.) – The Wildcats prevailed in the last minute of overtime on a corner kick at Ashland in a match that was competitive from start to finish. "I'm proud of how our boys managed the game being on the road," said Wilsonville coach Ian Reschke. "They stuck with the game plan, battled and found a way get the job done."

Central 2, Hillsboro 1 -- Central staked Hillsboro to a 1-0 lead before scoring two second-half goals to earn the win at home. The fourth-seeded Panthers netted the equalizer midway through the second half on a bullet from 18 yards out by Omar Ceja. Central scored the go-ahead goal with four minutes remaining when Brandon Lopez received a pass from Christian Lua and put the ball just above the goalie's reach.

South Albany 6, Putnam 1  -- Carlos Reyes scored three goals and Slava Hubenya had a goal and assist for host South Albany, which led 2-0 at halftime, scored a third early in the second half and was never threatened. "It was good to see the players get over their playoff nerves and play extremely well against a talented Rex Putnam team,” said coach Tony Vandermeer. “They had us on our heels the first 10-15 minutes of the game and it was good to see our squad solve the problems they were creating."

Silverton 3, Springfield 0 -- Max Linn set up Owen Bischoff for two first-half goals and the Foxes added a third goal late in the second on an Isaac Vargas free kick in the shutout, which occurred despite several good Springfield scoring chances.

Churchill 3, Hood River Valley 2 -- Harper Neubeck scored twice on first-half free kicks for the Lancers, who opened up a 3-1 lead in the 70th minute on an Eric Fox goal and hung on behind eight saves from keeper Nick Clendenen.

Corvallis 6, The Dalles / Dufur 0 -- Corvallis played great defense and controlled possession, wearing down The Dalles / Dufur at home on Tuesday. Edgar Monroy had three goals and an assist to lead the Spartans, who led 2-0 at halftime then tallied four times after the break to improve to 12-1-2 on the season.

Phoenix 6, Marshfield 0 – Early goals by Bryson Flenner and Dan Martinez put the Pirates in early control of the match and they carried the momentum to the finish.

Marist Catholic 2, North Valley 0 -- Sophomores Torrent Adkins and Irwin Leon each scored, one in each half, for the Spartans, who maintained the ball and the momentum for most of the match.

Seaside 1, Stayton 0 --Seaside avenged losses to Stayton the past two seasons by scoring in the 30th minute and having the goal stand up against the 2017 runners up. Dodger Holmstedt scored the lone goal of the match off of an assist from Chase Januik in the physical contest.

North Marion 2, La Grande 1 – A close game between well-matched teams came down to the final minutes at La Grande on Tuesday. After Edgar Lopez scored in the first half for North Marion off of a deflected free kick, no more goals were scored until the 79th minute, when the Huskies scored again. Andres Agabo put a deflected corner kick into the back of the net. It was the cushion North Marion needed, because La Grande scored in the final minute as Callum Ebel tallied from the top of the box to make things interesting. La Grande, however, could not net the equalizer as time expired.

Woodburn 3, Mazama 0 -- Fernando Torres had 18 saves for Mazama, which yielded three second-half goals to the 2017 5A champions.

Madras 3, McLoughlin 1 -- McLoughlin scored on a corner kick five minutes into the match but host Madras responded with three unanswered Leo Gutierrez goals, one in the first half assisted by Andres Acuna; to pull away. "Sometimes the first round is the hardest game," said Madras coach Clark Jones. "This was no exception."

Newport / Toledo 2, Ontario 1 – Senior Jose Gonzalez controlled the midfield for the defending state-champion Cubs (10-6), who went on the longest road trip anyone can remember to upend second-seeded Ontario (9-2-2) on Tuesday afternoon. Ontario scored first, as Danny Rodriguez dribbled through several defenders and found the back of the net in the 27th minute. Newport / Toledo netted the equalizer three minutes later, as Gonzalez fed sophomore Oscar Jimenez, who took one touch inside the 18-yard box and buried it low and hard at the near post for the score. The game stayed tied until the 15th minute of the second half when Juan Lopez’ cross from the right found the head of Kevin Teodoro. The senior butted the ball over Ontario’s keeper and into the net to give the Cubs a lead they would not relinquish. The second half was played mostly in Ontario’s end. Ontario’s few chances to knot the score were thwarted by the aggressive goalkeeping of senior Luis Reyes.

Riverside 3, Taft 2 – Two early goals by Taft put defending champion Riverside on its heels but the Pirates scored three unanswered to keep their hopes of a repeat alive.

Brookings-Harbor 4, Rogue River 0 – Fabian Villa scored in the first half and Jair Valdovinos notched the hat trick in the second for Brookings-Harbor, which pitched the shutout at home.

St. Mary’s, Medford 3, De La Salle North Catholic 0 -- Milan Bobek knocked a loose ball into the back of the net in the first half to spark the Crusaders’ 3-0 home win, which avenged a playoff loss in overtime to De La Salle North a year ago. Preston Jernigan scored on a PK in the second half and Nathan Sternenberg added insurance on a breakaway for St. Mary’s, which shut out an opponent for the 12th time this season.

Western Christian / Perrydale 4, Riverdale 3 -- Two evenly-match teams ended regulation play knotted at 2-2 before Riverdale scored a minute into overtime to take the lead. Western Christian responded with a goal five minutes later, when Landon Moore assisted on a score from Luke Williams. It appeared the match was headed to penalty kicks, but with seconds left in the second overtime, Keaton Hull received a long pass from Brayden Hopper near the end line and put a hard shot on goal that ricocheted off the keeper and into the goal. "Im proud of the tea; they never gave up," said victorious coach Dwaine Richards.

Dayton 6, Cascade Christian 1 – Tyler Spink scored the first goal for Dayton 10 minutes in and Lucas Findley added three of his own in the Prates’ dominating home win.

Catlin Gabel 6, Creswell 0 -- Catlin Gabel played excellent defense, denying Creswell a shot on goal, and scored six times itself, four in a 12-minute stretch of the second half, to cap a dominating win.