Football: Olds-led Oakland smothers Heppner 26-0 in 2A semi
Tweet
Cade Olds rushes for 183 yards and two touchdowns and snags one of four interceptions as the Oakers reach first final since 2012
November 19, 2022 by Jerry Ulmer, OSAAtoday 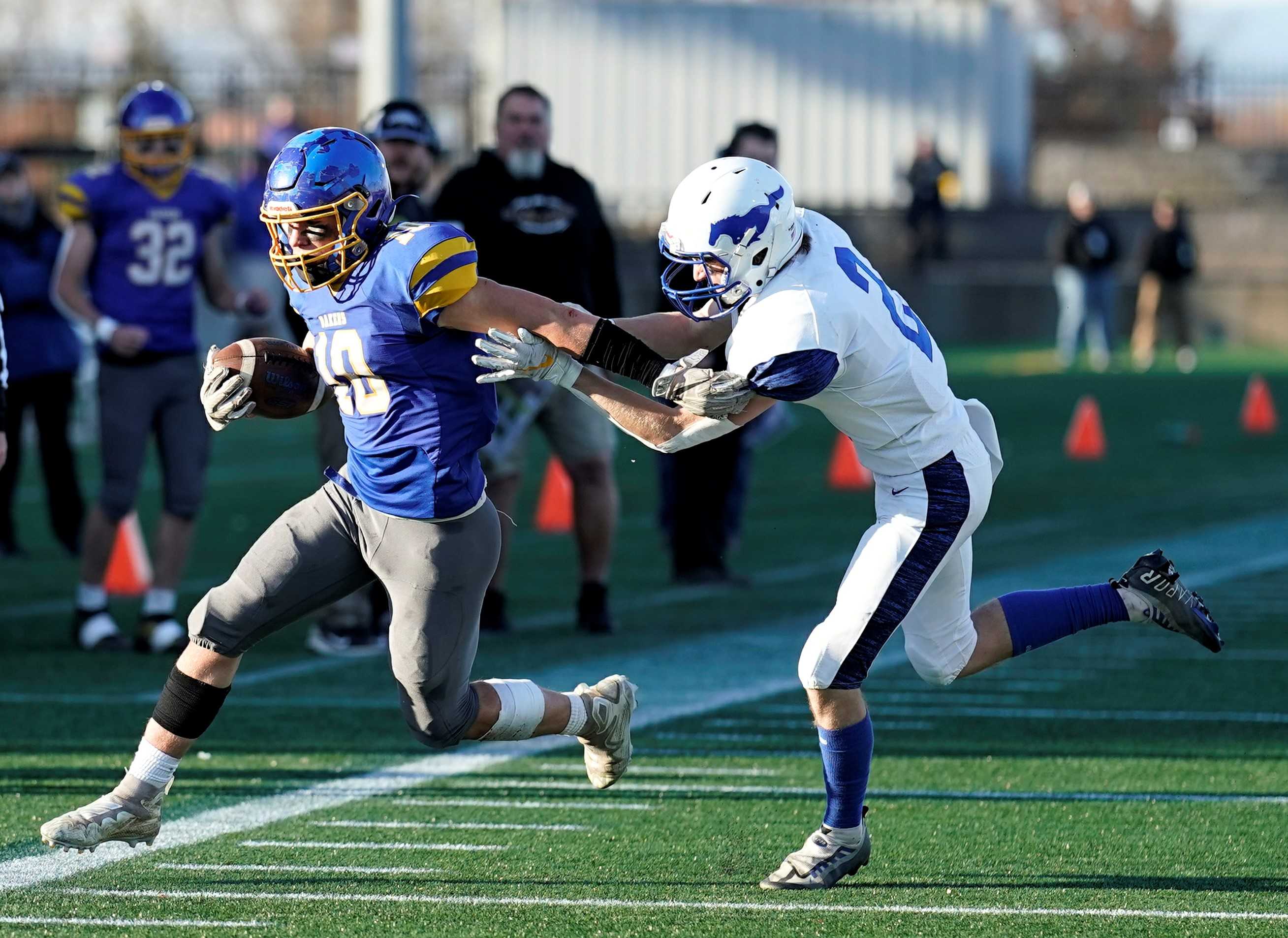 HILLSBORO – At the start of workouts last summer, Oakland coach Ben Lane asked his players to define their biggest goal for the 2022 season.

“We said, 'State championship,'” senior running back Cade Olds said. “We didn’t talk about any other kind of goals. We just talked about state championship. That’s what was on everyone’s mind.”

Coming off a first-round exit in last year’s 2A playoffs, the top-seeded Oakers (11-1) have been on a mission this season. And after defeating No. 4 Heppner 26-0 in a semifinal Saturday at Hillsboro Stadium, they are one win away from reaching their lofty goal.

Olds rushed for 183 yards and two touchdowns on 23 carries and the defense held the Mustangs (9-3) to 142 yards, collecting four interceptions, as Oakland earned its first spot in the final since winning the 2012 championship.

Three players from that 2012 team are now assistants on the coaching staff – Ryan Comstock, David Henry and Logan O’Hara – and the players draw inspiration from them.

“We talk about it every day,” senior quarterback Cole Collins said. “They bring it up, like, ‘When we were playing.’ I think we try to relate back to that and play like them. A lot of us grew up together and remember those guys. We really look up to them.”

Lane, who coached that team, sees many of the same qualities in his current squad.

“They have a lot of similarities,” Lane said. “Minus the depth that that state championship team had, this team is tenacious, and they get after it. They play the game hard, they play it right.”

Oakland will go for its third title next week when it meets No. 7 Weston-McEwen in the final. The Oakers will get a chance to avenge their only defeat this season, a 24-16 loss at Weston-McEwen in Week 2.

“It’s going to be a lot different, I can tell you that,” Olds said. “I think we kind of all forgot it, in a way, and got past it, used it as motivation to get to where we are now. They’ve changed, too. They’ve gotten better, and we’ve gotten better.”

Collins returned a punt 35 yards to set up the next score, a 10-yard touchdown run on a reverse by sophomore Silas Arscott early in the second quarter. Collins ran for a two-point conversion to make it 14-0.

“They were throwing some stuff at us today that our line was having a little bit of struggles with, but by the second quarter, they had it figured out and we had some plays,” Olds said. “It’s really fun when we can get it going.”

Oakland rushed for 300 of its 358 yards. The Oakers also showed they were capable of making plays in the air as Collins completed 5 of 7 passes for 58 yards and one touchdown.

The Mustangs, who lost in the semifinals for the second year in a row after the winning the 2019 title, were unable to contain Oakland’s ensemble of athletes. It didn’t help that senior middle linebacker Ty Boor was out after suffering an ankle injury in the quarterfinals.

“We’ve bent but not broke on defense, and we just had a couple letdowns on key plays on their first two TDs,” Heppner coach Greg Grant said. “To their credit, they executed. When they needed to get it, they got it. And when we needed to, we didn’t.”

Olds, who transferred from North Douglas as a junior, was a major factor. For the season, he has rushed for 1,386 yards and 29 touchdowns.

“He’s just been tremendous this year,” Lane said. “I’m happy that for about a seven-game stretch we saved him with about five carries a game, and this playoff stretch, we’ve totally leaned on him. The more we put on him, the more he wants.”

Grant was impressed with Oakland’s offense.

“They ran a good diversified attack,” Grant said. “They did not make a bunch of mistakes. And maybe they had an edge athletically in one or two places.”

Heppner’s Mitchell, who suffered a broken left hand at midseason, played quarterback for the first time since Week 5. He completed 6 of 12 passes for 74 yards with four interceptions – two by Collins and one each by Olds and Baimbridge.

“We showed some rust in that part of our game,” Grant said.