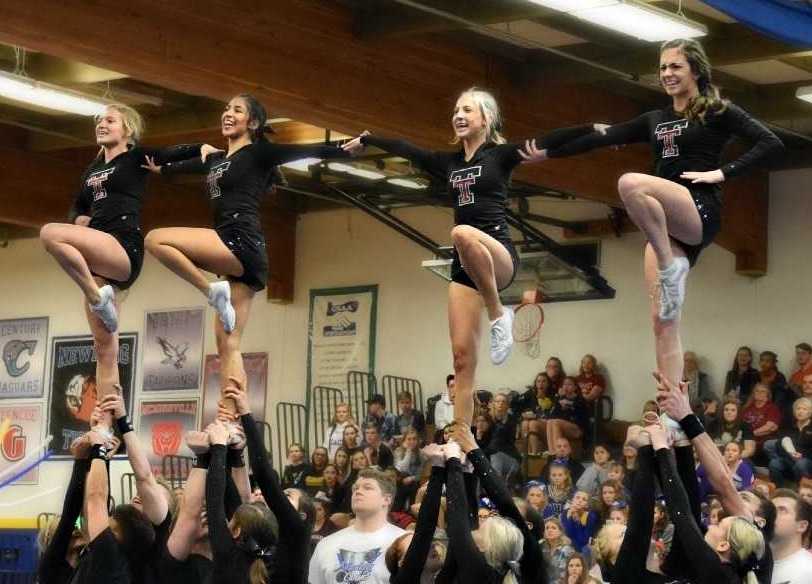 Returning Large Coed state champion Tualatin evoked shouts of "the pack is back."

With only two competition weekends left until the 2019 OSAA state championships, several teams looked to separate themselves from the rest of the pack this past Saturday and Sunday while others continue to jockey for position within their division.

Four contenders have emerged in the 1-3A Division in recent weeks. While undefeated Santiam Christian took the weekend off, Yamhill-Carlton ran its record to 3-0 with a 13-point victory over second-place Sheridan at the Newberg Classic.

Meanwhile, a focused and determined Delphian team dealt returning state champion Central Linn its second loss in as many weeks at the Scotsman Rumble at David Douglas High. The Dragons, now 2-0, came into the 2019 season highly motivated after losing the the Cobras by just over a point at the 2018 state championships.

A possible fifth contender in the 1-3A Division might emerge this coming weekend when Cascade Christian takes the mat for the first time in 2019. The Challengers were idle this weekend, opting to attend the USA Nationals workshop at Thurston but looked impressive at the Cottage Grove Invitational back in December.

The myriad of teams vying for the top 1-3A spot was contrasted this weekend where a battle between two 4A division heavyweights took center stage once again at the Newberg Classic.

After falling to Sweet Home by one-tenth of a point last weekend, a star-studded Newport team swung the pendulum its way with an eight-point victory over the Huskies at the Newberg Classic. Led by junior sensation Erin Watanabe, the Cubs are hoping their record-setting performance at the annual All State competition (where they won 18 medals) will translate to team victory this coming February.

In a rare three competition weekend, the 5A divisional waters seemed to only get more murky as each venue featured its own impressive champion. The RedHawks of South Albany had perhaps the most impressive win, beating crosstown rival West Albany at the Newberg Classic.

Both the Ridgeview Ravens (Scotsman Rumble) and the Wilsonville Wildcats (West Linn Competition) left their own positive impressions as well. The Ravens are easily becoming a fan favorite with their amazing energy and stellar choreography while the Wildcats might have the best tumbling in the state.

As competition hosts, Newberg did not compete on Saturday but even without being scored, it appeared the Tigers were looking to send a message to 6A divisional opponents Lake Oswego and Westview. Their exhibition performance was so electric, one spectator said they could hear and feel the gym rocking from outside the venue.

Their competitive absence, however, opened the door for the Lakers to to have perhaps the most magical afternoon yet for a team in 2019. Not only did Lake Oswego win its division on Saturday but the 2018 6A runner-up beat out three returning state champions (South Albany, Henley and Tualatin) for grand champion honors.

In a rare feat, Henley from Klamath Falls competed in all three competitions this past weekend. The Hornets, determined to assert themselves as a Small Coed Division contender, traveled over 650 miles on their way to two first place finishes and a third.

Perhaps no team made a greater statement this past weekend than Tualatin. Minus their star flyer and 2018 all-state team member Brendyn Riddle, the Timberwolves looked to squash any thoughts that the returning Large Coed state champions might be vulnerable with an eight-point win over second-place McMinnville.

While a veteran Tualatin team may have looked very businesslike on the mat, there was no holding back the excitement after placings were announced. As the last team to leave the gym, shouts of “the pack is back” could be heard as team members savored every second of a divisional victory that also featured previously unbeaten Thurston.

The competition season continues this coming weekend with events at both Sheldon and Clackamas.