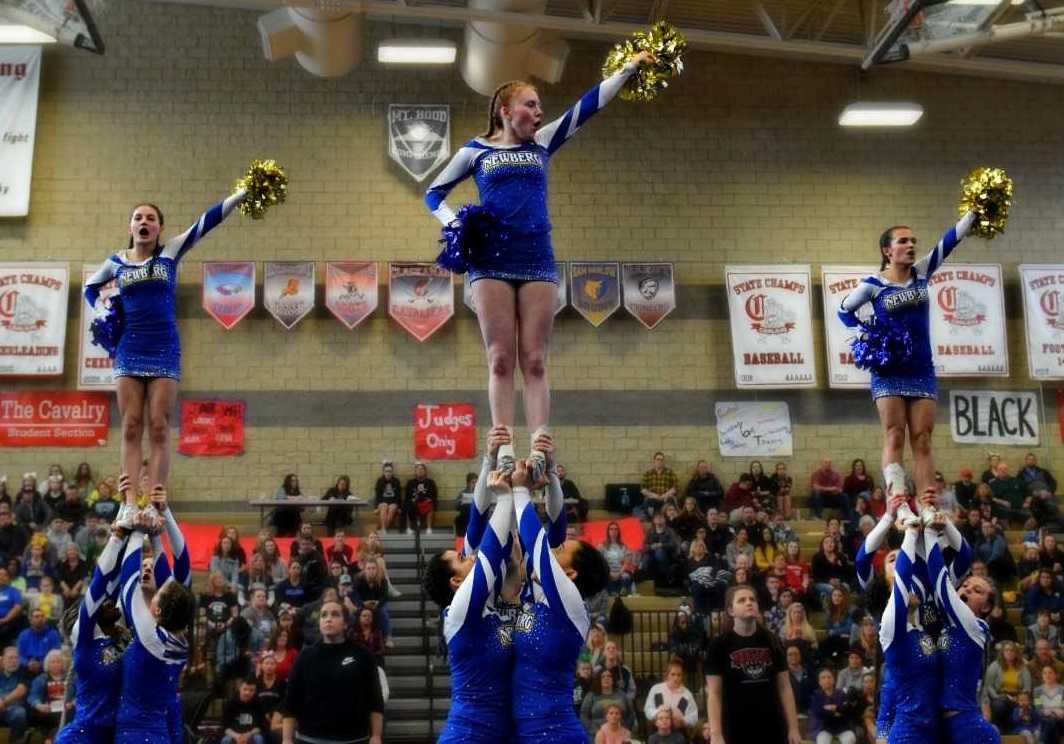 The Newberg Tigers looked dominant at the Cavalier Invitational.

While some cheerleading teams solidified their standing among the elite this past weekend, several teams used the opportunity to create chaos within their divisions.

A week after suffering its second consecutive defeat, Central Linn rebounded in a huge way by beating divisional rival Delphian at the Sheldon Invitational by 1.9 points. The win, coupled with Yamhill-Carlton’s victory at the Cavalier Invitational, gives the 1-3A Division four legitimate contenders at the upcoming OSAA championships on Feb. 9.

The Tigers, now 4-0, continued their winning streak with with an impressive 10-point victory over Sheridan. The division’s other undefeated team, Santiam Christian, returns to action this week at the upcoming Oregon Elite Classic after beating Central Linn two weeks ago.

In the 4A Division, Gladstone hoped to insert itself as a potential third-party spoiler in what has become a two-way race to the finish between powerhouses Newport and Sweet Home. The Gladiators' relatively close six-point defeat to a red-hot Cubs team at the Cavalier Invitational does show they should be a strong contender for a top-three finish.

Both Sweet Home and Newport have traded victories this season, with the Huskies winning on Jan. 12 at the South Albany Competition and the Cubs taking the top spot last week in Newberg. Many had hoped to see Round 3 between these dynamic teams Saturday, but the Huskies opted to take the weekend off and rest; fans must wait until they meet up in two weeks at the OSAA championships.

Speaking of rest, virtually every major 5A team was idle this past weekend, leaving only West Albany in action at the Cavalier Invitational. The Bulldogs' 18-point victory over Milwaukie stretched their record to 3-1 on the season and keeps them in the conversation for a top-three finish at state.

Perhaps the greatest statement this weekend was made in the 6A Division by the Tigers of Newberg. The six-time defending state champions may have had their share of electric performances this season but had yet to notch a victory over a marquee opponent.

The Tigers took care of that in one swoop on Saturday as they stymied their competition with a huge 10-point victory at the Cavalier Invitational. The field consisted of Westview, Lake Oswego and Barlow. Both Westview, the returning 2018 6A champion, and Lake Oswego (6A runner-up in 2018) entered Saturday’s event undefeated.

The Henley Hornets continued their remarkable season with another victory over Crescent Valley at the Cavalier Invitational. The Hornets, now 4-1 in the Small Coed Division, will have a tough matchup this coming weekend at the Oregon Elite Classic, where they will finally square off against perennial Small Coed kingpin David Douglas.

Also expected to enter the competition next weekend in Salem is The Dalles. A rising RiverHawks team, led by sophomore phenom Emily Adams, beat the Hornets last weekend in Portland to give Henley its only loss on the season

In a weekend usually meant to provide clarity to division frontrunners, Lakeridge did its best to muddy the waters in the Large Coed Division. A week after returning state champion Tualatin flexed its muscles over division staples McMinnville and Thurston, the Pacers took a wrecking ball to any notion that this will be a one-pony race in February. Lakeridge, coached by Hall of Famer Christine Cooper (2013 inductee), is undefeated at 3-0 on the season.

With only two weeks left until Championship Saturday, be sure to purchase your OSAA Cheerleading State tickets at osaa.org, where you can also preview the championship schedule.