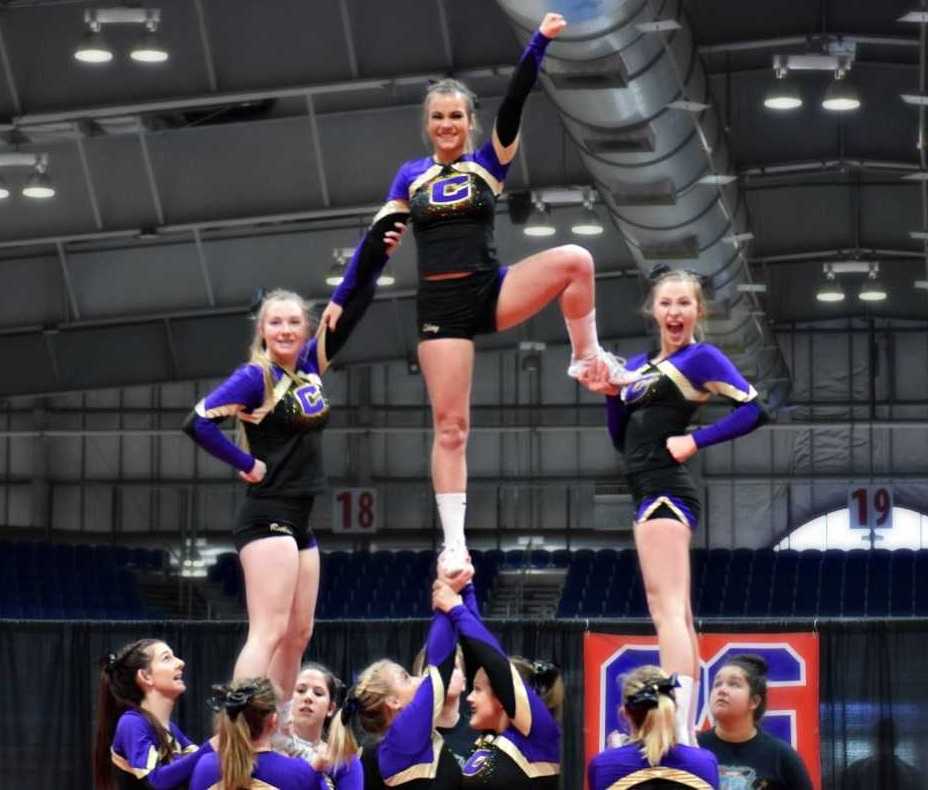 Cascade Christian beat previously undefeated Santiam Christian in one of the weekend's many marque match-ups.

In a weekend that historically has provided very little drama, the 2019 cheerleading regular-season finale defied convention with multiple major upsets.

With most routines set by the first week of February, the weekend before the annual OSAA championships is usually an opportunity for teams to get in one final performance and iron out small changes. Bucking that trend were Gladstone and Lebanon, who scored surprising victories over Newport and David Douglas, respectively.

While the Gladiators and Warriors created the greatest disruption within their respective divisions, others used the last weekend of the regular season to close the scoring gap between them and divisional frontrunners.

At face value it appeared the Cobras of Central Linn seized control of the 1-3A Division with their second straight victory over Delphian. After losing to the Dragons on Jan. 19, Central Linn rebounded to win the next two competitions, including this past weekend at the Tualatin Competition.

A closer look at the scores, however, shows Delphian -- which lost to Central Linn by only 1.9 points on Jan. 26 -- closed the gap, losing by a razor thin four-tenths of a point this past weekend.

Adding intrigue to the 1-3A Division, Santiam Christian,which entered this past weekend undefeated, suffered its first loss to a surging Crusader team from Cascade Christian at the Oregon Elite Competition in Salem. The Eagles' defeat was less a result of any errors on their part but more a product of an improving Cascade Christian, team led by four all-staters, beginning to hit its late-season stride.

After beating rivals Sweet Home and Gladstone on consecutive weeks, it looked as if the Cubs of Newport were in total control of the 4A Division. Committing an average of only 1.0 penalties per contest, Newport uncharacteristically tallied six points in deductions and opened the door for a rising Gladiators team, led by junior superstar base Evie Garver, to win at Tualatin.

In the 5A Division, little changed in terms of overall standings. With Wilsonville once again idle, a battle between the Albany schools took center stage.

South Albany defeated its rival West Albany at the Oregon Elite Competition for the second time this season. The Redhawks, who finished the regular season undefeated, looked sharp but the Bulldogs put on their most impressive performance of the year closing what was a nine-point gap between them and South Albany two weeks ago to only 1.7 points.

Crowd favorite Ridgeview of Redmond once again looked impressive, with a 20-point victory at the Tualatin Competition. Despite seven points in penalties, the Ravens cruised to an easy win, giving credence to their status as the potential 5A darkhorse.

In a weekend that saw confusion ensue throughout many of the divisions, one thing became very clear: The two best teams in the state of Oregon reside in the 6A Division.

Despite Newberg’s second straight victory over Westview, The Wildcats showed why they are a perennial power and owners of eight OSAA cheerleading championships, with a goosebumps-raising performance at the Oregon Elite competition. Newberg, which is looking to win its seventh consecutive state title, finished the regular season undefeated at 4-0.

In the Small Coed Division, Lebanon recorded the biggest upset of the year over a previously undefeated David Douglas team. Three weeks after placing third at the South Albany competition, the Warriors used an impressive stunting section and flawless performance to beat the Scots 193.1-191.1. David Douglas, which had two points in deductions, still put together a solid routine despite losing an athlete due to injury in the warm-up room just minutes prior to taking the mat.

In the Large Coed Division, frontrunner Lakeridge took the weekend off but watched a trio of contenders in McMinnville, Tualatin and Thurston battle it out in Salem.

McMinnville, led by senior leader and all-stater Rylan Hargis, won the three way match-up and looks poised for another possible title run reminiscent of its 2017 championship year. That year, The Grizzlies never looked dominant during the regular season but followed a blueprint that showed steady week-to-week improvements on their way to peaking during the second week of February.

Coaches and spectators are encouraged to visit the OSAA website for information regarding next weekend’s state championships. Warm-up times, performance order, parking and ticket prices are all available via osaa.org