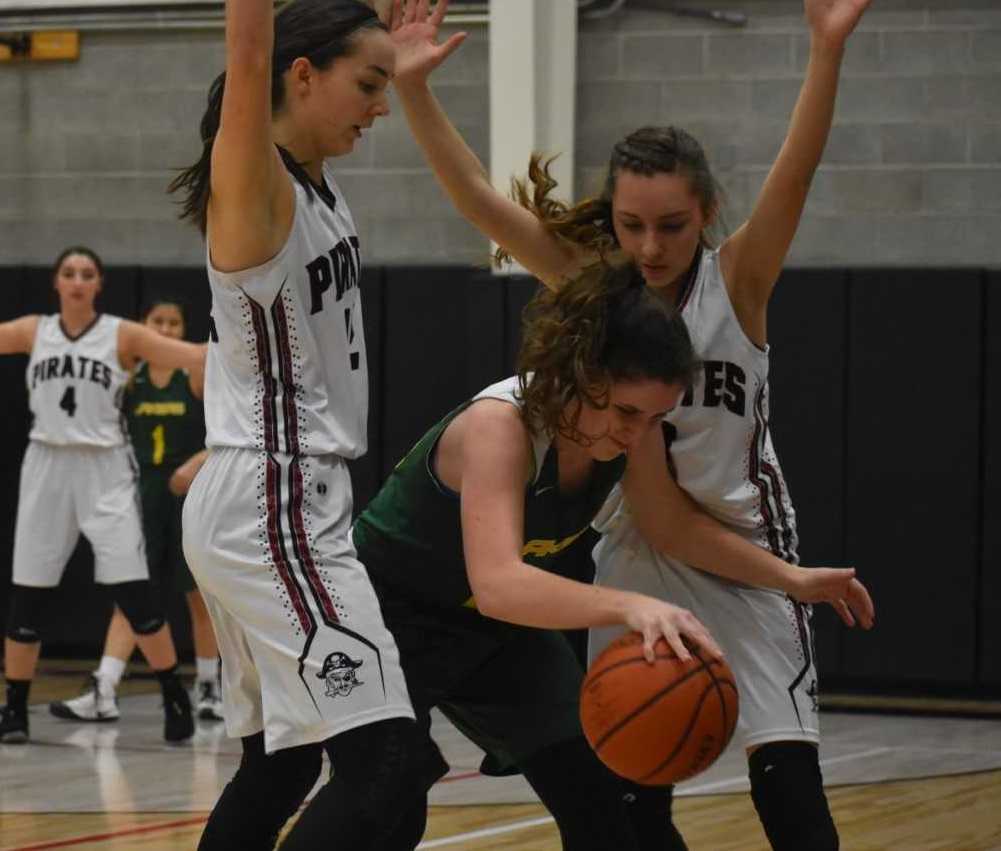 PERRYDALE -- Regardless of the result Wednesday night, it was going to be the last home game for Perrydale seniors Sydney Perkins and Alyssa Lux.

And they left it the way they wanted, beating Triangle Lake 66-21 in the first round of the OSAA / OnPoint Community Credit Union 1A girls basketball playoffs.

Perkins made four three-pointers – three in the first half -- and finished with 13 points for the Pirates (21-7).

“I mean, it’s hard knowing that we’re not going to be here again, but we played so well that it was a good game to end on,” Perkins said.

Perrydale held the Lakers (15-13) to two first-quarter points and six in the first half, all coming by Bailey Ellis. The Pirates led 41-6 at half.

“It’s really important for us in these games to play like we’re capable of instead, ‘Oh it’s layback. We’re not going to worry about this,’” Lux said. “But take all the little things into consideration and work on those. When we play a really good team, that we already have those cracked down and ready to go.”

Perrydale, the 11th seed, must have the little things in order Saturday when it travels to Medford to play No. 6-seeded Rogue Valley Adventist (20-2) in the round of 16. The winner advances to the 1A state tournament.

“I think it’s really important because we got to work on all of the fundamentals, like talking on defense and our trap and everything, so that’s really helpful,” Perkins said.

Ellis finished with 13 points for the Lakers.

A look at Wednesday's other 1A first-round games in the OSAA / OnPoint Community Credit Union 1A girls basketball playoffs:

Adrian 53, Hosanna Christian 45: Adrian (13-3) outscored Hosanna Christian 17-7 in the second quarter and held on to pull off the upset on the road. Grace Morton led the Antelopes with 16 points, including 11 in the second half when Adrian held off one Hosanna Christian push after another. Stella Nichols added 14 points, 11 rounds, five steals and three blocks. Sadey Speelmon contributed 10 points, eight rebounds, five steals and six assists. Hosanna Christian, which finished the season 19-6, played the game without Kya Nelson, its leading scorer and defender. Meredith Bush scored 19 points to lead the Lions, whose coach of 19 years, Tony Bush, stepped down after the game.

Southwest Christian 37, Echo 22: Southwest Christian’s tough defense and height advantage proved the defense in the low-scoring road win. The Wildcats held Echo to just nine points in the first half and led the entire game, except for one possession midway through the first quarter. Sophomore Rachel Haas, whose three pointer erased Echo’s brief lead, led the way for Southwest Christian (18-6) with 15 points. Kayla Morgan, a 6-1 post, added 12 points and eight rebounds. Emily Turner, the Wildcats’ other 6-1 post, contributed four points and seven rebounds. Only four Echo players scored in the game, led by nine from Rachel McCarty.

Days Creek 42, Chiloquin 37: Days Creek won a back-and-forth affair on Wednesday night, using an opportunistic offense in the fourth-quarter to come from behind for the win. Lori Jackson, Kyla Crume and Joleen Crume combined for 29 points in the win for the Wolves (17-9). Lani Jackson had 15 points and Presley Frost added 10 for Chiloquin (14-9), but both fouled out of the contest and were not on the floor at the end.

Elkton 50, Alsea 44: Aspyn Luzier scored 20 points, including six three pointers, and Kieryn Carnes chipped in with 10 as the Elks (16-11) won on the road. Jessica Carlisle, Jamison Harper and Megan Harper combined for 28 points in the loss for Elkton, which finishes the year 15-9.

Joseph 62, Ione 24: Joseph, ranked fourth in the OSAAtoday coaches poll, used a relentless press to dominate young Ione from start to finish. Sophomore Jessica Medina scored 10 points and freshman Hailey Heideman scored eight for Ione, which finished 18-5. Joseph, which was led by 28 points from Sabrina Albee and 15 from Madelyn Nelson, improved to 23-3 with the win.

Crane 67, Wallowa 31: Pressing from the start, Crane, No. 5 in the latest OSAAtoday coaches poll, jumped out to a big lead at home and was never challenged. The Mustangs built a 20-point lead by halftime and outscored Wallowa 34-18 in the second half. Freshman Kelsie Siegner led all scorers with 20 points for Crane (23-4). Riley Davis and Elizabeth Jenkins teamed for 22 more. Shawna Ray Tillery paced Wallowa with 13.

Damascus Christian 61, Willamette Valley Christian 41: A 12-2 start for Damascus Christian propelled the Lions to the wire-to-wire win. Senior Tory Webb had a double-double -- scoring 15 points and grabbing 20 rebounds -- in the home win.