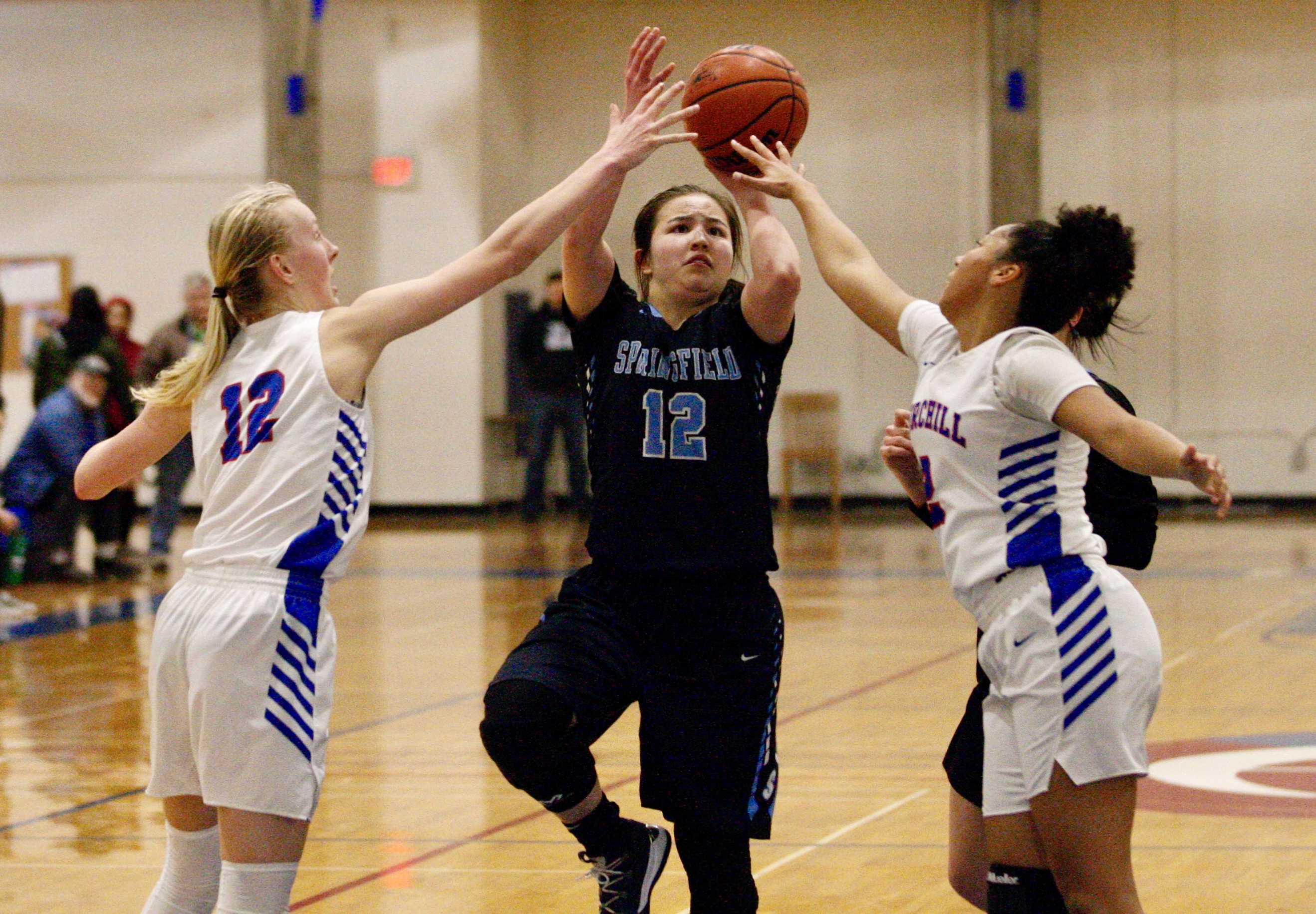 EUGENE — Springfield had every reason Friday night to crack, fold and disappear quietly back across the Willamette River, and nobody would have blamed the Millers at all.

Instead, they beat back — in order — a terrible start, foul trouble, iffy free throw shooting near the end of the game and some pressure situations that could have destroyed them.

And because they did all that, they also knocked off Churchill 50-44 on its own court in the most important game of the Midwestern League girls basketball season.

The sixth-ranked Millers now are in absolute command of the league race. They entered Friday night’s biggie against the No. 4 Lancers tied at the top of the league standings at 13-1. Their only loss was to these same Lancers on the Millers’ own court back on Jan. 19, so the only chance they had to win the title was to win Friday night.

Now all they have to do is beat last-place Ashland on Monday and they’re home free.

None of that looked at all possible in the first three minutes against the Lancers. Churchill’s splendid senior wing, Isis Smith, sandwiched a layup on both sides of a Sophie Elstone three-pointer, then hit a free throw after a Natalie Elstone layup.

Springfield’s output during the stretch? One free throw. They were down 10-1. In the Lancerdome.

But if the Millers were reaching for the panic button, it didn’t show. They’re a veteran team that has run over a lot of tribulations this year.

“When you start the game down 9-1,” Springfield coach Teke Silva said, “composure has something to do with how you respond. We started a game like that against Crater, too.

“Would we like to get better starts to games? Absolutely. The bottom line is that we were able to get composed, do things right, and do things as a team.”

Silva didn’t call a panic time out, either. She waited until the Millers were down 9-1 before calling time out.

“Sometimes you just have to let things play out.”

Sure enough, the Millers were back in the game quickly. They finished the first quarter with a 12-6 run the ended an eyelash before the break with a huge play. Senior guard Becca Durbin stole the ball from Elstone while the Lancers were setting up for a final shot, went the length of the court to lay the ball in and sank a free throw to get her team within 16-13.

It was a street fight after that. The Lancers have weapons all over the court and used them all, but the one that drove the Millers nuts all night was freshman — yes, freshman — guard Dani Starr.

Starr was a problem. At six feet, she can post down low; she can also step out and hit from the perimeter — or put the ball on the deck and drive.

And it’s hard to double team her because of Smith and scoring balance in the rest of the lineup.

But panic time was over and the Millers had ignored it. They never trailed by more than four points after that, and instead quickly caught up on Emma McKenney’s layup that evened things out at 24-24.

The Lancers got a layup from Starr to take a 26-24 lead into the locker room. Silva didn’t like that one bit.

“The first thing I did,” she said of the break, “was put the number 26 on the board and circle it. I said, ‘That’s too many points, guys. too many.’

But which Lancer to focus on? All of them.

“They’re a really good basketball team,” Silva said, “and they have five kids who can all hurt you. You can’t leave anybody out. Our goal was to leave them open as little as possible (duh), help where we could and recover as quickly as we can.”

That was the story of the whole second half. The experienced Millers locked up on all the Churchill shooters and took away almost all of its offense. It came at the cost of foul trouble, but it ultimately took the Lancers far enough out of their game for the Millers to take control early in the second half.

They broke the last tie of the game on another Durbin steal and layup for a 34-32 edge, then smothered Churchill’s shot selection.

This is defense: Stella Scott hit a layup for the Lancers with 6:29 left in the third quarter — and Churchill didn’t score another field goal until there were 24 seconds left in the game. That’s 14:05 without a basket from the floor.

The Lancers kept whatever hope alive with some wonderful free throw shooting. They hit nine in a row at one point and still were behind just two points with 3:09 left in the game.

They had to put the Millers on the free throw line to stay alive, the Springfield accommodated the strategy bu missing four straight free throws in the last 1:35.

Then McKenney got involved.

“When I was over by the bench,” McKenney said, “Teke called me over and said ‘You need to get the ball in your hands a lot.’”

McKenney, who scored 16 points, said the Millers (19-4) were never worried about the quick Churchill start.

Neither did Durbin, who led everybody with 19.

“I can pass the ball to anybody,” she said. “If they trap me, I can throw it anywhere. Emma came up and I got the ball to her. Everybody can handle the ball.”

Starr had 15 for the Lancers. So did Smith, but she got only eight after the first quarter.